A scene that is constantly changing turns this ride into an amusing outing with the crystal-clear waters of the lake always in sight. 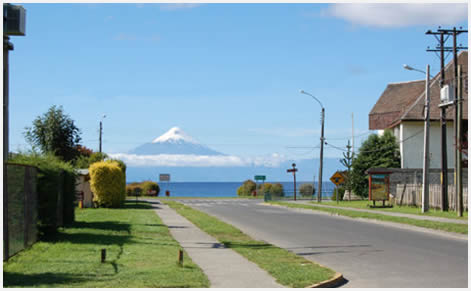 As any city by the water, Frutillar reflects its beauties on the waters of Lake Llanquihue, a waterbody that may be surrounded completely and accompanies the circuit in a must excursion.

We ourselves decided to devote our entire day and our car to go around its perimeter. The town of Llanquihue was our first stop on the coastal road. It offers nice views of the Osorno Volcano, good accommodation options, as well as hunting and fishing clubs. After that point, we took the Panamerican Road to reach Puerto Varas, where we made a short city tour around the streets boasting European aspect and its waterfront promenade. We were welcomed by its flowery gardens and the busy streets full of cars and people, typical of this tourist destination year round. We took the road to Ensenada and left the beautiful German architecture of the city behind to get deep into the wildest zones of the Valdivian rainforest.

In a few minutes, we had got away from the populated area. We got past the beaches known as Hermosa, Niklitscher, Punta Cabras and Poza Loreley, each of them featuring a particular kind of charm. The latter boasts a lake called Verde -which stands for green in Spanish-, lush vegetation and an island accessed by kayak. Many young people were enjoying the sunshine at this location. 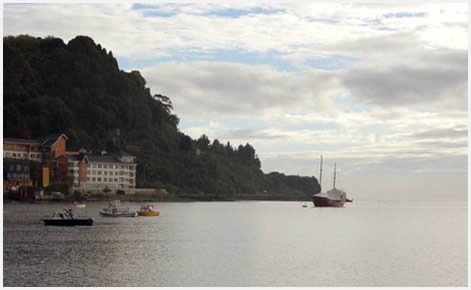 We moved on always heading for Vicente Pérez Rosales National Park, a green natural haven. We watched the escorial -a 200-year-old lava tongue that reaches the shore- with amazement. The Osorno Volcano presided over the scene. The environment was humid due to the different tree species and, as we stopped for a while, we noticed that the volcano was the absolute protagonist. Specialized guides lead visitors on ascents up its hillsides, cracks and areas with highly dangerous low clouds. La Burbuja Ski Resort is popular among visitors who have not practiced this sport before.

We continued our way towards Las Cascadas, a site with scarce steady denizens that is highly coveted by people who search for quiet beaches in the summer. Campsites and cabins are amidst the accommodation options and buses provide services towards Osorno. The silhouette of the volcano grows bigger and is appreciated as a whole. It is necessary to ask for information about what trails to take so as to reach the cascades. El Maitén Beach features a very ancient chapel formerly used by German colonists. It is impossible to imagine what it meant to open up new paths at this location in order to build new houses.

The circuit turned southwards. We visited Maqui Beach, where we went for a walk along a point over a cliff featuring incredible panoramic sights. We could see three volcanoes, Centinela Peninsula and the lakefront of the City of Frutillar. We were very close to completing the roundtrip around the Llanquihue and the presence of Puerto Octay connected us again with the picturesque most densely populated towns on the shore. We went on a city tour and enjoyed its hills, its historic houses and a beautiful view from Centinela Bay. 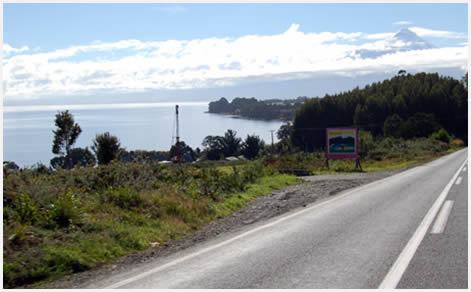 We covered the last stretch that would lead us to Frutillar along the shore, at sunset. In the distance, we could see the lights on the lakefront and the reflections of different hues on the lake surface. Amidst that familiar glow, the comments about the pleasant ride we had taken emerged and remained even during the family dinner.

The ride around Lake Llanquihue may start at either of the cities mentioned in the circuit and in both directions. The total distance to be covered is 190 kilometers on a paved road.

The circuit may be enjoyed on a private vehicle or the tour may be hired at various local travel agencies. This way, more may be learned about the history of each site and the wonderful ecosystem in which this circuit is immersed.