The natural vegetation of the surrounding hills and the beautiful gardens of the typical wooden houses add character to this historic village. 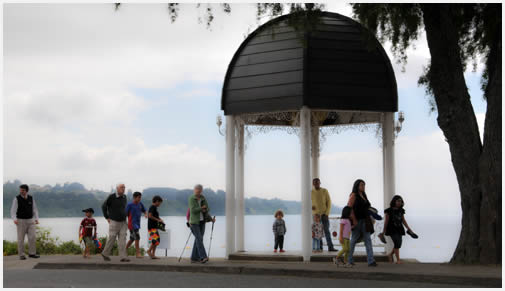 The impressive view of Lake LLanquihue and the village spread along its huge bay meets the eye from on high. Its sidewalks lined with well-tended buildings, some over 150 years old, bear witness to the history of the town.

Strolling along the boardwalk we were soon captivated by the view of Osorno and Calbuco volcanoes. We walked the full length of Philippi Avenue, framed by beautiful trees along a sandy beach.

We were delighted by the way old German style manor houses have been preserved. Some of them are still homes to families, though not as numerous as those of long gone days. Most have been turned into hotels, restaurants or arts and crafts shops open all year round.

Many still have their original siding and larch shingle roofs and large windows with breathtaking views. Two of the most outstanding buildings of that time are the Richter House (at present the Art School) and the Lutheran Church. 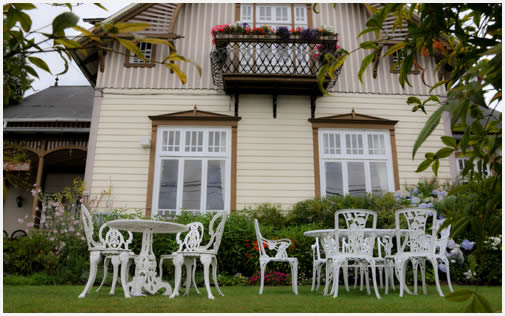 We stopped at one of the traditional tea houses to taste their renowned pastries and enjoy the scenery. We tried their kuchen famous not only for their flavor but because their German recipes have been handed down for generations. All of them were absolutely delicious.

In front of the Town Hall, a gigantic chess board painted on the street boasts easily moveable pieces that entice players.

The most revered symbol of the town is the Teatro del Lago, the Lake Theatre, a modern building attesting the importance given to music, art and culture. It stands tall by the lake and the musical ornaments along the shore are a landmark. Their Music Weeks, which take place during the summer, are famous and attract a large audience.

We continued our walk along Perez Rosales Street, stopping at every garden and home to delight in the fusion of Chilean and German styles. It is a restaurant strip, with a good choice of craft beer and typical lamb and pork dishes. 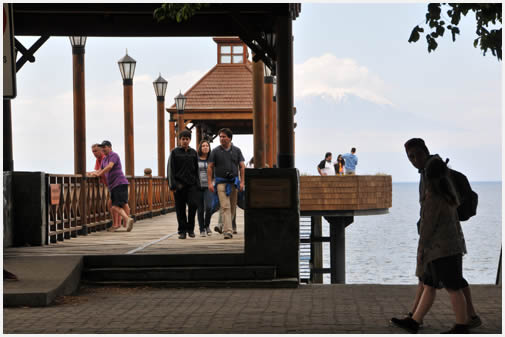 We reached the Museo Colonial Alemán, the German Colonial Museum, with its incredible garden, manor house, mill and forge helping us to understand the way the first German immigrants lived.

We then went to Frutillar Alto, a much higher area of the village where several vantage points provide a more ample view of the bay and are perfect spots for taking photos.

We strolled along the wide streets full of shops, flats, schools, a bank and the bus terminal. An old railway line bears witness to the means of communication used in colonial times.

In the evening, as the boardwalk lights shone on the water and the fresh breeze blew softly from the lake, there were very few people outdoors which made us realize that night life takes place mostly indoors, in restaurants and homes. 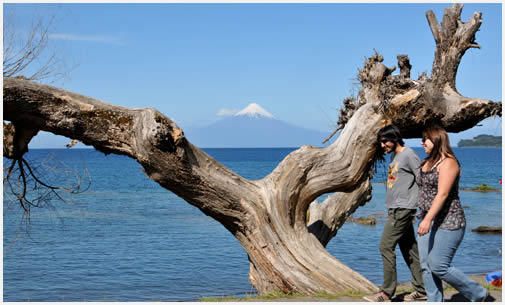 Although Frutillar is a city, it is still a provincial town at heart, where everybody knows one another, greets one another and works to improve tourism. It is a peaceful, musical place and that is the feeling we strove to convey.

Print this outing
« Back to Outings in Frutillar