Every summer, the Musical Weeks aim at surpassing the previous issue with famous performers and a wide array of presentations for an expert auditorium.

Frutillar, a town reminiscent of the German culture, has known how to maintain and capitalize an already consolidated event like the Musical Weeks for 45 years. Every season, audiences are captivated by a feast of good music and a quiet environment for ten days.

The Theater of the Lake, located on the surface of Lake Llanquihue, is the host and it gets its magnificent rooms ready to become devoted to art during such an important occasion.

The program includes music and authors from different periods as well as famed national and international performers and conductors, chamber music bands, choirs and soloists.

The moment to access the venue to see the first concert arrived. From the very beginning, we felt the respect of the audience for the artists. Within a relaxed atmosphere and browsing the program, we stopped for a moment to have a look at that space of resonance that would soon be invaded by music. Little by little, both performers and instruments settled down in front of the music stands and we let ourselves be carried away in our seats to a place where our emotions would be set free. 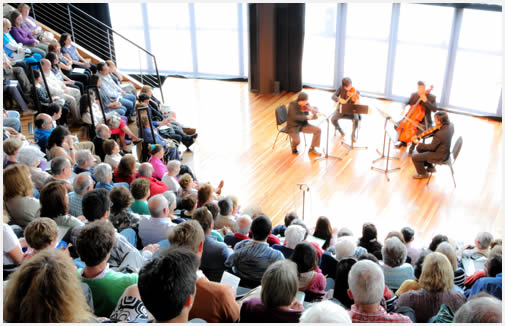 As silence gave way to performance, the musical notes danced amidst eighth, sixteenth and a hundred and twenty-eighths hand in hand with the musicians. Paying close attention to the score, they looked at one another in search for the necessary obedience to manage perfect musical harmony.


All for One and One for All

Our ears joined the feeling and we admired the perfect union of sound and silence with our eyes closed. The counterpoints in the score made each instrument protagonist in the correct moment.

The musicians could not help moving. The music made their bodies dance. The applause at the end of the performance was so intense that we were all thrilled.

Each room has its own personality. The Amphitheater seems to be standing on the waters of Lake Llanquihue and it shortens the distance that separates it from the local volcanoes. Thus, the scene is integrated to the music.

The room called Espacio Tronador has almost 1,200 seats and a charming beauty. It is the largest in the complex. Made completely of wood, it features curved lines that start on the stage and continue onto the seat rows and the high balconies. 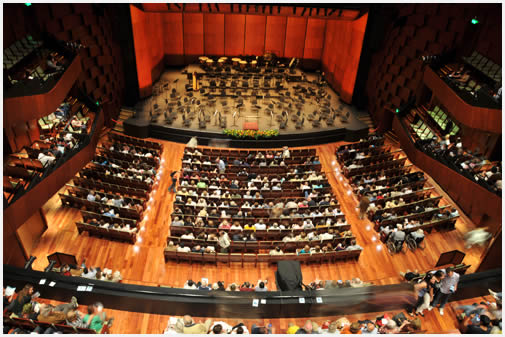 At first, the Musical Weeks were held at the Catholic or at the Lutheran churches. Later on, they were presented at the municipal gym until the increase of attendants made it necessary to offer a more adequate space. This is clear proof of the passion generated by these gatherings in Frutillar.

The construction of this place was possible after much effort and all kinds of help. The Theater of the Lake was inaugurated late in 2010 and it is equipped with cutting-edge technology, according to the strictest international standards. Its neat acoustics allow a perfect amplification of sounds onto all the corners of the rooms, as concerts, songs and dancing are presented there.

Its outside is a replica of the wooden sheds built by the German colonists. Therefore, it is a tribute to this people. Special rooms for courses and workshops have been prepared for cultural and educational expansion as well as creativity.

We were pleased to talk to the president of Corporación Cultural Semanas Musicales, Ms. Flora Inostroza, who has accompanied this project ever since its beginning. Her personality is characterized by her expertise, leadership and passion.

As far as the selection of artists and authors of the concerts in each presentation is concerned, she told us: "There are regulations and demands concerning the spontaneous presentation of the artists who present their curricular background. The final program is made according to diversity. This is suggested by the members of the audience themselves, who always express what they want and expect. It is evident that the presence of young people is a fact that allows us to continue working. It is amazing to see the great amount of performers and people who come from distant countries to join us year after year.

In addition to the program held in Frutillar during that week, other nearby Chilean cities were invited to have concerts free of charge led by the musicians themselves.

All along the lakeshore in Frutillar we found ornamental elements related to music and contributed by the concert sponsor. An odeon, a simile Steinway grand piano, the gazebo, to name a few, accompany locals and visitors during their rides.

Everything is in tune, like the best of violins, Frutillar welcomes the Musical Weeks every year and everyone works for a city with a soul.

the theater stands in the center of the city

A great audience is summoned by the concerts at Frutillar. Make sure you get your tickets and book accommodation in advance.

A fee is charged.