Sunset by the Sea

We went on the typical tour along the waterfront promenade. An excellent way of enjoying sunset on the Pacific Ocean. 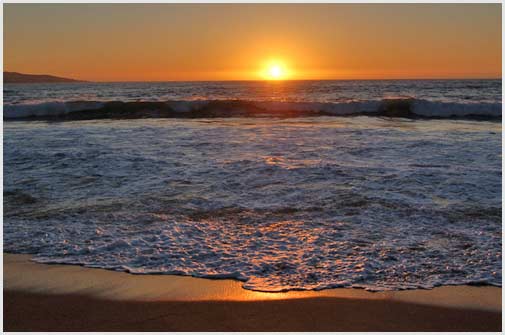 As most seaside cities, Viña del Mar has an important promenade along which there are numerous restaurants, handicraft markets, tea-houses, recreational facilities and impressive buildings that make the city the first place visitors wish to see.
One of the best ways of touring around the seaside is on foot and the best moment to do it is when the bright sunshine begins to cool down, as the sun finds its way behind the horizon upon the cold waters of the Pacific ocean.

The tour is fifteen blocks long, approximately. We started the walk at Caleta Abarca beach, on Marina Avenue, opposite the much photographed Clock of Flowers. This symbol of the city was acquired in 1962, due to the first football world cup held in Chile. Ever since, and with some changes in its mechanism, it has shown the time in Viña el Mar. 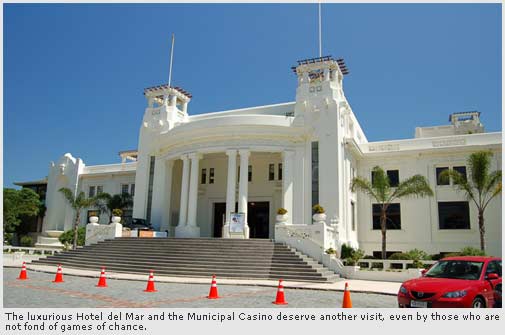 We headed northwards to a small bay towards the Miramar beach, where the Hotel Sheraton Internacional lies. We continued walking and in a blink of an eye we were in front of Ross Palace, venue of Club Unión Arabe. Farther ahead, in a sharp bend on the rocks, we found Wulff Castle, which seems to steal the panoramic view of the city due to its architecture and beauty.

Following the coast, and crossing the estuary, we got to Perú Avenue. As soon as this road begins, an impressive white construction captivates the tourists' attention: It is the luxurious Hotel del Mar and the Casino Municipal which works in its facilities. This place deserves another visit, even by those who are not fond of games of chance. Inside, there are two first-class restaurants, a theater, a disco and the typical gambling rooms. Next to the casino lies Colombia Square. At this point, there are two choices: renting a bicycle or going for a ride on a Victorian carriage pulled by horses up to the end of the promenade.

We decided to go on walking for 5 more blocks along Perú Avenue, always northwards. On its sides, there are wide sidewalks full of seats. Important residences are built on one of their sides, and they have privileged views of the surroundings. Perú Avenue ends in 8 Norte Street. At this point we had to take San Martín Avenue to continue our seaside tour. This street is a spot full of life during weekends. The most important bars, ice-cream parlors, restaurants and pubs are placed there. It is the gathering point preferred by youth.

Always northwards, our next reference point was Acapulco Beach. Here, the best thing to do is to take off the shoes and walk on the fresh fine sand. 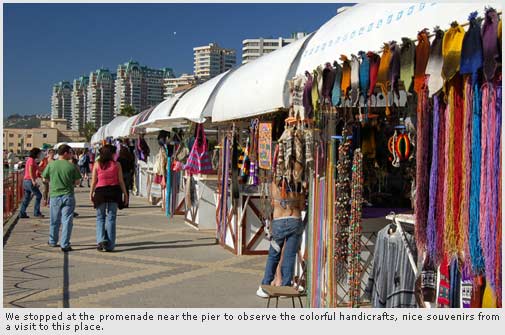 Opposite, we found Vergara Pier. Built in 1910, after 73 years, it was refurbished for the first time in order to change it into a popular recreational site. Many people visit it everyday to try fishing lines and nets to get crabs and jaibas.
We stopped at the promenade near the pier so as to observe the colorful handicrafts. Nice souvenirs can be bought at good prices.

The tour continues in front of El Sol Beach, and then on Jorge Montt Avenue, where the facilities of the Chilean Navy Building, the Museum of Cannons and the Stella Maris Sanctuary are located.

We decided to stop and admire the sky turning slightly red before the immense sea. Slowly, the western wind became more intense. Staring at the orange sun, we got captivated by its slowly vanishing shape. In silence, we only heard the seagull honk, which seemed to fly looking for it and wishing the day did not end, that it lasted for some minutes more before giving way to the night and the stars.