The crossing takes a few minutes and leads to a world teeming with nature and history of denizens who have dwelled on the island since time immemorial. 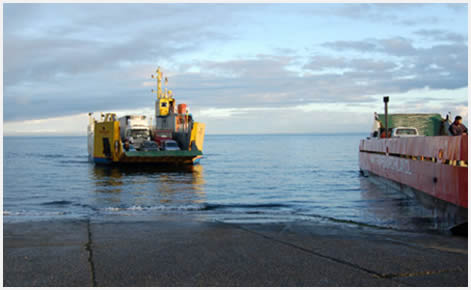 The Chiloé Archipelago has a singular magnetism as it contains a wide array of events related to the colonization of Chile within an almost wild natural environment. To reach this land, travelers must cross the broad channel known as Chacao on board a ferry boat that leaves from the District of Pargua and guarantees a pleasant voyage.

We could spot the huge ferryboats loaded with cars, trucks and buses coming from the island as we drove near the seashore. In a few minutes, after having waited for our turn, we were already settled on board one of them and started sailing. We were headed for the north of Chiloé Island. Ancud and Corcovaado Gulfs stood to both sides. Even though we were advancing fast, the movement was almost imperceptible. The day was sunny but the wind was strong on our faces at times.

We waved at a small population called Carelmapu, known for its festival devoted to Virgen de la Candelaria, for its inlet and its Brava Beach. A project exists to build a suspension bridge between the continent and the island but time will solve the different opinions to such respect. This engineering challenge would have about three kilometers of length to surpass the water course. 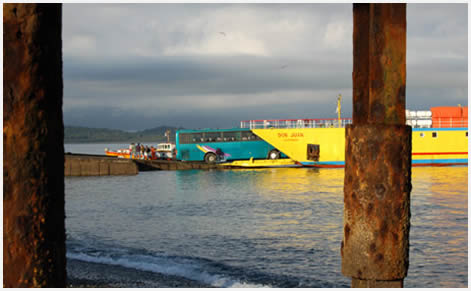 We had a look at our maps and brochures containing information about the place we would visit once we were on solid ground. Chiloé National Park is an interesting attraction with its humid -usually rainy- weather and the evergreen forest teeming with olivillos, coigües, myrtle trees and Patagonian cypresses. Fauna includes Darwin's foxes, pudúes and Magellanic woodpeckers, as well as sea lions and otters in the water environment.

As we landed at the port of Chacao, we took the main road on the island, which borders the gulf. Before reaching Ancud, we resolved to visit Caulín Bay, well-known for its oyster farms on the sea shore and its typical restaurants. There is a sanctuary for migratory birds at that very spot.

The peace and quietness of this first stretch on the island appeared again all throughout it. Each village told us its history related to churches scattered all through the archipelago. They still stand in spite of the fact that they were built by the Jesuits in the seventeenth and eighteenth centuries. Many of those villages contribute their beaches. Some of them are sandy, others are covered by pebbles. 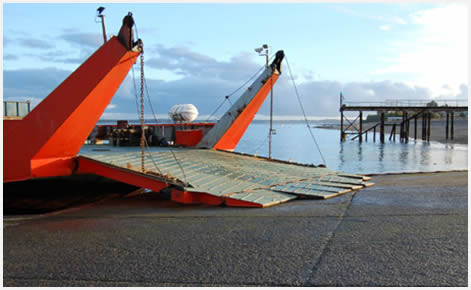 The Chacao Channel and the ferryboats invite visitors to get deep into a big island that has a lot to discover and learn while its countless colorful fishing towns are seen.

The crossing takes about 30 minutes

Travel 60 kilometers along a paved road up to Pargua, the site where the ferryboats are boarded. Two companies offer the service regularly from 7 am to 11.30pm. They leave every 20 minutes and the crossing takes half an hour.

The regular ferry service to cross to Chiloé starts at 7 am and leaves every 15 minutes until 11.30 pm.