It is moving to see how the small churches spread all over the archipelago are essential to the population and to feel the spirit of devotion still present within their walls. 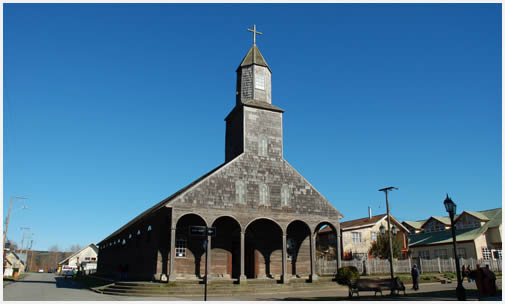 The Church Route had called our attention before arriving on Chiloé Island. When we visited Ancud and the visitor center of the Friends of Chiloé Churches Foundation, we became even more interested due to the site plans and extensive information they provided.

Once we reached Castro and had our own car, we began our tour at the main square, site of San Francisco Church, the first point of our itinerary. The most important in the city and originally the center of the mission, it was an impressive sight in the early morning light. After suffering serious damage and fires, the present building, in neogothic style and chilotan architecture, was completed in 1912. Once inside, we found the central nave, vault, images and the light through the stained glass windows incredibly beautiful.

Following our instructions, we left the capital of the island and made our way to small towns along the northern route. A few kilometers later we came to Dalcahue, San Juan de Tenau and Colo Churches. Although each one has its own characteristics they are all located in rural areas near the shore and are really simple. To reach some of them we had to take a short ferry ride to the islands just opposite the shore. For instance, we crossed from Dalcahue to visit Achao and Quinchao and drove along some beautiful local roads.

We made a stop at Dalcahue to have a quick lunch and then set off along the southern route where we managed to visit Nercón, Villipuli, Chonchi and Andachild churches. However, the last rays of sunset had dimmed by the time we got to Detif and visiting hours were over.

Each church had something different to offer. All of them are extremely valuable to the island communities and, as in the past, are a part of their daily lives. Most of them are examples of wooden ecclesiastical buildings of the Chilotan School of Architecture; many are National Monuments of Chile while others are part of UNESCO World Heritage. 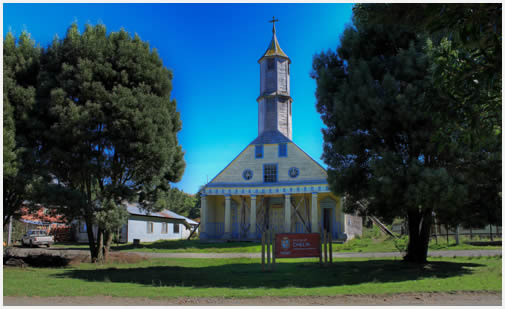 We can picture the Jesuit and Franciscan missionaries at work. They built walls and roofs with wood from the surrounding forests, and used their expertise at carpentry in jointing with myrtle pegs and nails, in some cases without the use of common nails. Towers play an important role and differentiate the churches.

What most impressed us was to learn that they have been standing between 100 and 200 years and that they are a meeting point for local residents who attend mass. They uphold tradition and many of them have cemeteries where colorful offerings are a common sight. The picturesque markets offering typical food, the short rides on barges and the murmur of locals going about their daily activities made this splendid day even livelier. 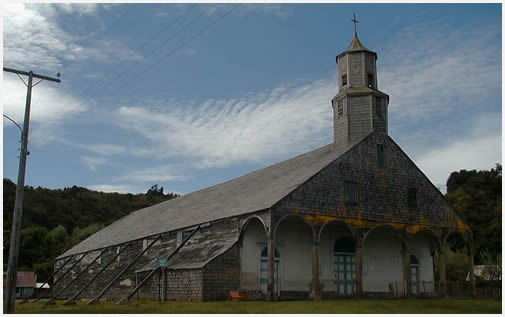 The route can take a day or longer according to time availability and personal interest. You can drive your own car along well kept local dirt of gravel roads or hire an excursion from a tourist agency in the city.