The best cuisine and recreation are concentrated within a few downtown blocks and show the excellent quality of this tourist destination. 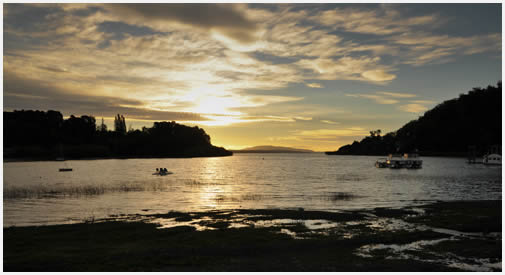 DowntownPucón is constantly on the move, regardless of the season. There is no set circuit to go around it. Every visitor can choose the order they like.

We ourselves resolved to have a general view of the city. We went up a viewpoint located on the hillside, at the Poor Clares Monastery. We accessed the hill through Ansorena Street and caught a panoramic sight of the low-roof town, the lake and the volcano.

We retraced our steps following the same street and visited the shore of Lake Villarrica first and then continued onto the commercial center. We reached Grande Beach, the most popular due to its extensive strip of thick dark sand. There is a special section for swimming and another one for nautical activities. It is a chosen destination among youngsters and a mixture of the colors made up by beach apparel, kayaks and sailing boats. A pedestrian promenade on the lakefront and a forest providing plenty of shade lie alongside the coast.

We walked on towards the peninsula, which cannot be accessed because it is occupied by private condominiums. Then we followed Geiss Street, on the lakefront, towards the area known as La Poza. Featuring a refurbished structure, this is a very pleasant circuit with a wall of rock that contains the sand and the grass from the beach. It starts at Ermelinda Hott Square, a site for celebrations and events, and ends up at the sailors pier. A small port shelters watercrafts and catamarans. This confirmed us that the beach is only used for sunbathing but the water is not suitable for swimming.

As we took O´Higgins Avenue, we entered the most dynamic sector in Pucón, where we experienced the whirlwind of its commercial district, including the streets that cross it. Ansorena and Fresia are the busiest arteries. We went around its shops, restaurants, handicrafts markets and adventure travel agencies without following any particular itinerary. 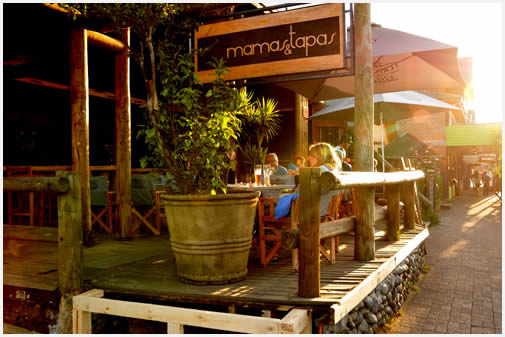 Fresia Street is famous for its restaurants, which set tables on their wooden terraces on the sidewalks for customers to eat outdoors. During the summertime, Fresia becomes a pedestrian promenade. Besides, it is characterized by the nature of its native vegetation, which varies according to its proximity with the mountain, the forest or the lake.

We found two must-visit shopping centers. One is located at 200, Fresia Street and the other one is on the corner of O`Higgins Street and Colo Colo Street. In the former, we were tempted by German specialties such as kuchen and strudel. They both feature state-of-the-art nautical and technical apparel shops.

Coffee houses, pubs and restaurants offer all kinds of specialties, at all times. As a summer destination, Pucón offers the chance to see people having a salmon omelette for breakfast or a hearty brunch, as well as those from whom a cup of coffee is enough. Also, there is no particular time of the day to enjoy craft beer and there are plenty of options. 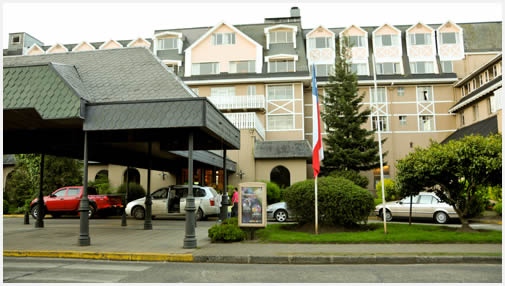 The main square welcomed us under the shady trees as we admired the emblematic five-star Hotel Pucón, a grand stately building.

The Villarrica Volcano spied on us at several corners. It is huge and it boasts its classic fumarole. However, it was at La Poza where we sat in silence and were delighted by the last hues of sunset coloring its snow-capped silhouette.

In the evenings, the city changes its physiognomy. Dim lights and lamps take hold of the streets. People wander around in search of a place to have dinner, end the day with a drink or try their luck at the casino.

Pucón is small but it features countless options to have a good time. 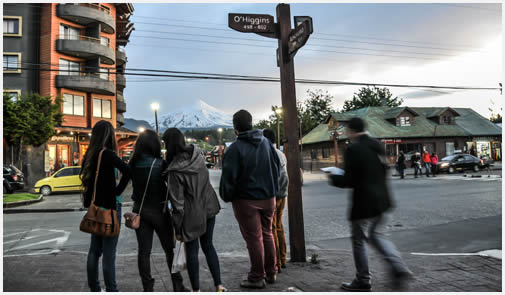 Print this outing
« Back to Outings in Pucón