Close to the city center but requiring considerable effort, this outing leads to a secluded spot and rewards you with the view of a fantastic water fall. 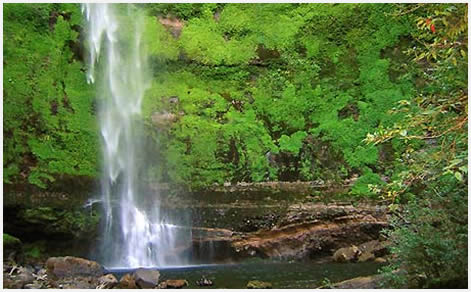 There are many ways of getting to know Pucón. Some are passive but most are adventurous and fully engaging. Salto del Claro is one of the latter.

Having some training in walking and mountain biking, we decided to attempt reaching a clearing in the woods where a ninety meter high fall pours into a deep pool. This combined outing is known as mountain-trekking.

Equipped with an all terrain bike, a helmet, a tool set and a spare tube we set off with our experienced guide. A brief talk was enough to show us how to use the appropriate gears in the different terrain we would encounter. 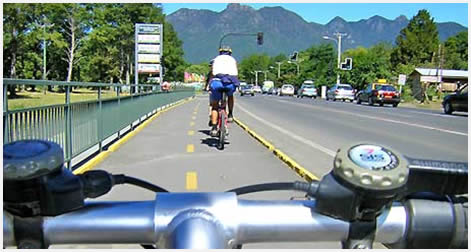 We headed southeast and when we reached the outskirts of Pucón turned into a gravel road at Los Calabozos. As we entered a thick wooded area, populated by native trees, we began to feel the strain. We were careful to keep ourselves hydrated.

We had covered about 5 kilometers when we reached the entrance to Fundo Los Guindos where we paid the admission fee and left out bikes at an alloted spot. We began our trek along a mountain path and climbed steadily until we reached a natural vantage point with a breathtaking view of Villarrica lake and volcano by the valley where Pucón is located.

We began our descent in a very damp area, among such thick foliage it practically blocked out the sunlight. At the same time we could hear the sound of the much awaited fall. It was really fresh when we got to the gully along which the Claro River flows and we came face to face with fall, boisterously pouring down. 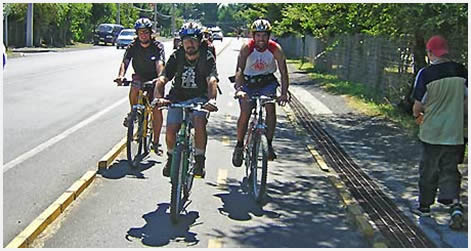 Let me introduce you to Salto del Claro, the highest in the area, said our guide. Feel it, live it, take all these sensations with you, he added. From below we looked up trying to take in every detail and it seemed as if the water was moving in slow motion although its rumbling and its impact on the pool denied this. We had really pushed our bodies to the extreme, so we welcomed the fresh spray from the fall. Only one of the group members boldly dived into the freezing water of the pool.

We took a few minutes to rest before turning back, while we gazed at it silently. We walked at a slower pace, but with the same energy while commenting on the splendor of Mother Nature and how lucky we were to be able to visit these remote, secluded corners. We got on our bikes and kept our hand on the brake just to be on the safe side, as it was a steep downhill ride.

Back in the city center we bid our guide farewell and congratulated ourselves for having chosen an unforgettable outing.

Distance to the waterfall: 6 kilometers

Hiring a mountain guide is mandatory. You must be physically fit.
Taking a water bottle and replenishing it is essential.