Lake Rupanco and its Surroundings

Entre Lagos is the starting point to visit one of the most extraordinary areas in the region: Lake Rupanco, its surroundings and its people. Horseback rides, salmon, forests and much more. 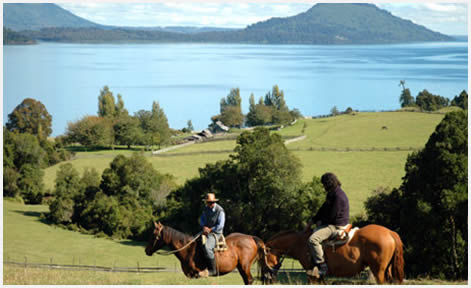 As I had heard about the existence of new rural tourism excursions and visits to the rural communities offered by some tourist operators, I resolved to pay a visit to the municipal tourist office of Entre Lagos during my short stay in the area.

We left from the very center of Entre Lagos heading for giant Lake Rupanco following a tour across forests and small villages, which finally bordered one of the shores up to a pier where a local was waiting for us in order to take us around the beautiful lake. 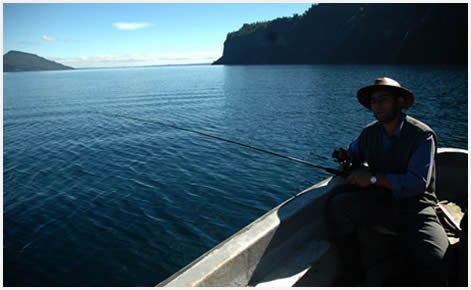 Beauty is immense. This deep blue water mirror, watched by the Puntiagudo Volcano and by ancient forests that cover its shores, was the first spot to surprise us while the group was getting on board.

Inside the lake surface, Cabras Island and Ciervos Island -whose names stand for goat and deer islands, respectively- stand out. We could watch those animals on each of them from the boat and we listened to an educational lecture about how these animals are grown there for sport hunting.

The fishing rods could not be absent. The idea was to try and catch some large salmon which go up the rivers and station under the natural spring waterfalls that fall directly into the lake. 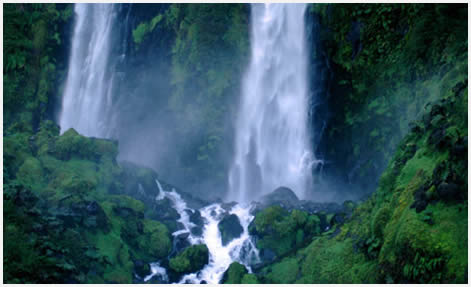 One of them, maybe the most famous due to its name: El Calzoncillo (which means men underpants), along with others like El Moro and Huillinco, make up this group of charmed falls from where some boats depart so that tourists may appreciate the size of the brutal spurts of water.

Today, tourism is one of the most frequently used words in the area. Kind colonists welcome visitors and invite them to go on horseback rides across the mountain range, go hiking along trails surrounded by ancient alerces and even to enjoy tours to cascades and natural springs only accessed on horseback through sceneries of incredible beauty.

Without noticing that we had been sailing for over one hour, we arrived in a salmon trap where it was possible to watch dozens of workers feeding these large fish in captivity jumping from one side to the other and running and sliding at incredible speed. 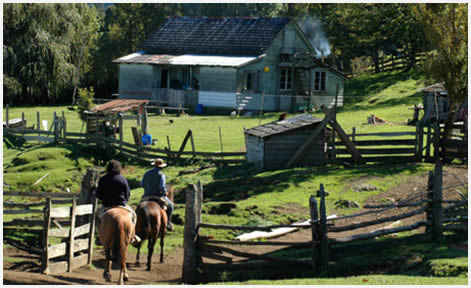 We slowly got away until we finally crossed the lake and bordered the sandy beach up to a small lawn and a main house, where horses of several breeds would wander free.

The roads bordering the lake lead to various places that still preserve vestiges of the German tradition from the mid XIXth century, represented in the work and the constructions built by the descendants of the colonists who dwelled in these sites and who have left their remarkable architectural legacy.

We were at Las Vegas-Santa Elvira, a beautiful spot on the shores of the lake, from where the main house would be seen along with several corrals and a prairy so large and green that it seemed to have no end. 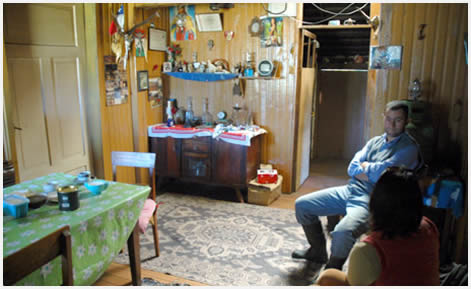 Its kind owners, who were expecting us on a small wooden pier, immediately asked us to come in. They had prepared a typical local breakfast, with fresh bread, cheese, jams, butter, juice and coffee. It was really delicious and it was the kind of energy we needed in order to set out on the horseback ride we had longed for.

And there we went, indulging ourselves by driving a herd of sheep that should not be grazing so close to the lake. The horseback tour was only an excuse to visit part of the estate and watch life closely in these desolate spots where social relationships are -just like needs and priorities, much different what happens in the big city. 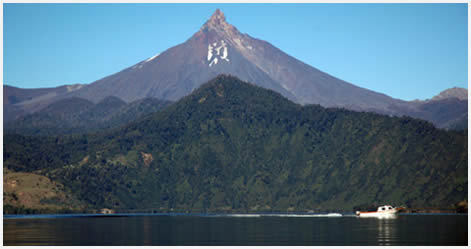 The view from the lakeshore is unique, especially when the quietness defeats the wind and the lake turns into an endless mirror. The Puntiagudo Volcano reflects perfectly on these waters and watches silently the coming of the night. It waits eagerly for the start of the new day to make sure, just like has in the last few million years, that Rupanco still remains in the very same spot. Its loyal friend and brother: the lake.

to travel from Entre Lagos to Lake Rupanco, take the road called Interlagos

This kind of rural tours is begining to be all the rage worldwide. The possibility of appreciating sceneries with the people who dwell in them is a new way for those who only think about doing real estate operations with nature to understand that man has always lived on his land and, even if it may be beautiful, everything must remain that way.