We visited Huapi Island. A real journey back in time, where past and present meet to tell us more about the history of the primitive peoples. 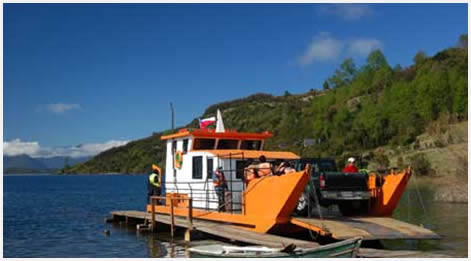 The sun rose slowly and the warm October sun began to erase the grey clouds from the previous day. The clear sky reflected its purity in the crystal-clear waters of Lake Ranco.

Standing by the pier at Puerto Futrono, we were looking forward to the arrival of the municipal boat that takes passengers to Huapi Island. After a 45 minutes voyage on a motorboat which carried 24 passengers, a vehicle would be waiting for us on the island.
Huapi Island, located in the northern center of Lake Ranco, is part of the important cultural heritage of Chile, as it is one of the few places where features of the Mapuche-Hulliche ethnic group may be found in its purest state. About 900 people with a high degree of kinship and original ancestors co-exist there. The best part of all this is that they are willing to show their habits, origins, beliefs, handicrafts and typical dishes, maybe in a desperate call to vindicate their nation and existence. 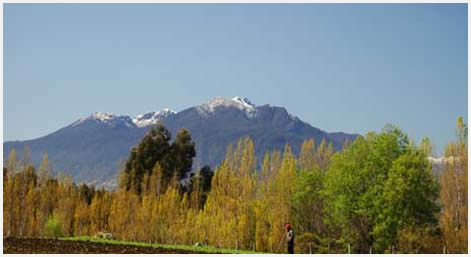 Once on board the boat, Hugo and Juanito  the skippers  made some comments about the island. They live there. They are members of the community. They say that it is a quiet place and that the land is still preserved in the same conditions from time immemorial. The truth is that there is very little documentation about the island. It is known that it occupies 826 hectares and it is estimated that the first families settled down there about 400 years ago. The first pieces of information about the dwellers of the island date back to the chronicles of Luis de León, which deal with the skirmishes the Pehuenches and Huilliches held against the Spaniards between 1575 and 1585.

The quiet waters of the lake offered us a pleasant sailing experience. Soon, we left Mounts La Trafa, El Mirador, La Puntilla and Illaifa Island behind and we spotted the enigmatic Huapi Island. From the boat, the first building we could see was the school. Around 90 students attend classes there to receive the traditional Chilean education.

On solid ground, we were welcomed by a group of men and women from the community. Quite unexpectedly, the Lonco -head of the community- don Francisco Ñancumil, was among them. Very gracefully, he granted us an interview in order to talk about the island, the life of its dwellers and their customs. 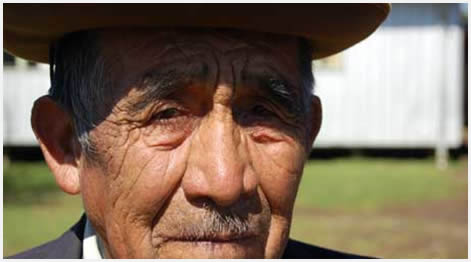 The Lonco and His People
Don Pancho Ñancumil is over 70 years old. With weather-beaten skin, he speaks quickly and in a low voice. At moments, it is necessary to get closer to him in order to listen to what he is saying. He refers to his native tongue, mapudungun, most of the time and then he translates what he says into Spanish so that we may understand him. He occupies the most important place on the island. He is the master of ceremonies at all mapuche festivals. His main message was that we should pray to God in order to give thanks for everything He gives to us. He professes his love for nature and all living beings and wisely recommends that we should respect our elders. They have wisdom because of experience he asserts.

We visited part of the island and its history. He showed us the Ruca, which is a primitive house still preserved to show what living in the community used to be like in the old days. We had a long conversation with Francisco. He told us about the islands myths and legends, the arrival of the huinca (white man) and its consequences. 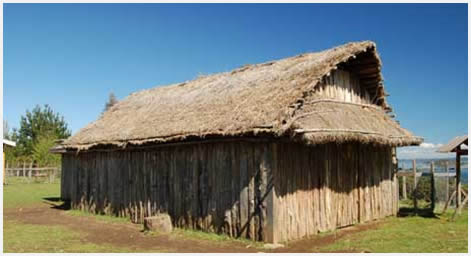 He also showed us around the school facilities, where a group of women was expecting us with a real banquet: typical dishes so that we may also discover the flavor and the smell of their cooking. There we met Enedina Ñancumil, Juana Manqui Ñancumil and Estela Requeman Loncochino. In this opportunity, their hard-working hands had prepared milcao  a dish based on potatoes  on which we spread some honey, handmade jam and local butter. Besides, we tasted the katuto  a delicious roll made of wheat which may be fried or baked seasoned with coriander and chopped onion. Everything was delicious.

As we shared some mate, our conversation about their customs and projects continued. We learnt that in the summer they hold a folkloric fair where they sell typical dishes, woven items and drinks and where traditional costumes may be appreciated. They believe that tourism will generate more work and that is why they look forward to the coming of visitors.

After this unexpected reception, full of politeness and good manners, we resolved to continue discovering the charm of the island. The surrounding mountains, the hills and the soft undulations were captivating. 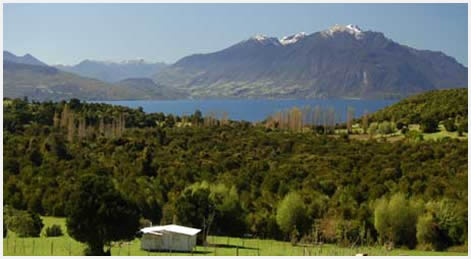 Before we left, they mentioned the famous Witch Rock and its legend. It seems that whoever passes through the crack formed in the rock will make their life longer. But they should dare to pass. Whether a myth or the real thing, we were moved by the story and that became our next destination.

We bade farewell to our hosts with our hands up and the message of see you soon seemed to appear on the horizon. It was a very gratifying experience to have shared those moments with the inhabitants of Huapi Island, where the Mapuche-Hulliche community managed to organize themselves in harmony between the two worlds so as not to lose their roots, their origins and not feel disconnected from the modern world.
At noon, the sun was shining with all its strength. We were heading towards the Witch Rock, but that is different story.

the entire island presents inner paths that make it easy for visitors to tour around it.

There: in order to reach Huapi Island, visitors must take the ferry leaving from Puerto Futrono on Mondays, Wednesdays and Fridays at 9 am.

sharing with the islanders everything they offer visitors is a good way to thank them for letting us learn about their customs, beliefs and lifestyle. You had better pack enough photo film or digital memory: the island sceneries are unique and photographs are a must.

Where to Sleep: there are no sites authorized to accommodate guests on the island yet. However, some local families offer their services to lodge guests at their own houses.

What to Buy: typical dishes, drinks and handmade jams and mapuche handicrafts.
Duration: half a day, taking into account the ferry timetable. It returns at 2.30pm.