We visited the house where the well-known poet and writer Pablo Neruda lived. A visit to his house enabled us to spy on the personality of this distinguished Chilean writer. 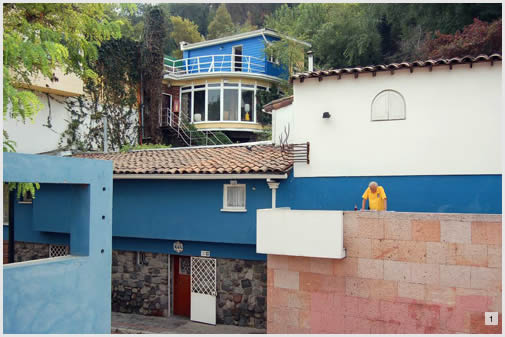 While we were walking around the quiet neighborhood of Bellavista, in Santiago, a house located on the mountainside of San Cristobal in a narrow street caught our attention.
Its peculiar shape indicated that it was not an ordinary household. Its over-elaborated architecture invited us to learn more about it and at that moment we understood that we were in front of La Chascona, the house that Pablo Neruda built for his lover and then third wife, doña Matilde Urrutia. We were glad to hear that there were guided tours inside and without delay we walked into this interesting construction.

The name La Chascona was given by Neruda in reference to the hair of his then secret love until 1955. Chascona is used as a synonym for the word unkempt in this country. The truth is that this is far from being a place where hairdos matter, the house shows the unique world where the remarkable Nobel Prize of Literature recipient used to live. 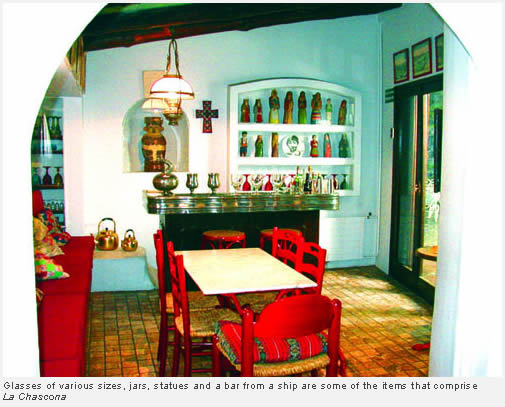 His obsession for the sea made him build a house with the shape of a ship. Cluttered with unique items that only Neruda could use, the house surprised us at each step. Jars and vases of various colors, windows, gas lamps, figureheads, coins from different countries, shells, paintings by famous friends, secret passageways and other rooms, a bar built with the wood of a French ship, comfortable armchairs and its valuable library are some of the items in this construction.

Germán Rodríguez was the architect and he had already built Nerudas house on the Black Island. Just like on the previous occasion, La Chascona was no exception to trying to reach an agreement with the writer about the design and form. The result was an open air hall where many stairs lead to the living-room, dining-room and other rooms. 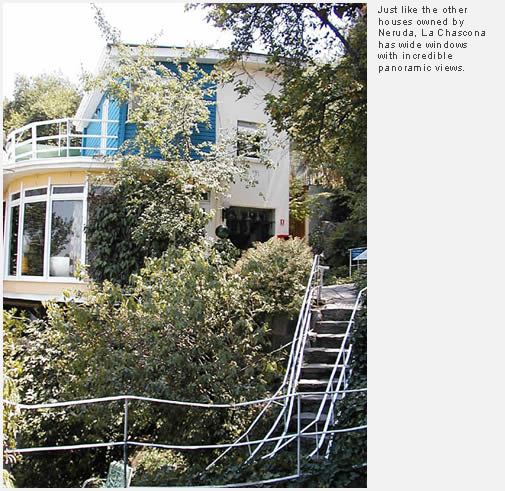 Below the house, there is a piped cascade. The housekeepers say that at the moment of its construction the fall would crash loudly in the garden of the house while its basin meandered on its side giving the feeling of sailing. There was nothing better for Neruda, self-proclaimed paper sailor, since he got seasick and could not sail.

There are many colorful flowers. Soon, we are in a different passageway that leads us to Matilde's study where her piano and other items are contained.
It is a dream-like place. Calmness is breathed in the air, which without a doubt has inspired the poet in many verses. All of Nerudas houses have this dream-like spirit. La Chascona was no exception and the writers magic can be seen in every detail. 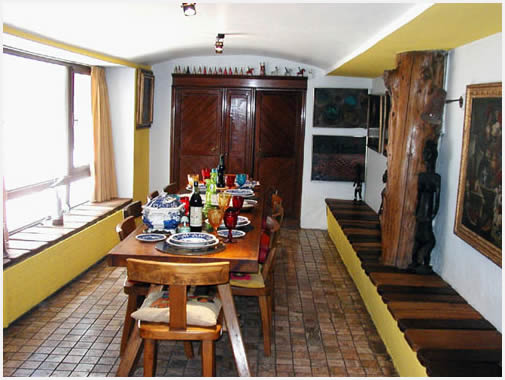 We know that the house has been through hard times. In 1973, after the military coup overthrew President Allende and after Neruda died in a clinic in Santiago, La Chascona was one of the targets for attack. It was plundered and the irrigation ditch where the water ran was covered. The stream overflowed and flooded the whole house. Despite all that, Matilde kept vigil over the remains of the poet in the house that they shared. She was in charge of having the house refurbished little by little.

Finally, La Chascona came back to life and it has been a house-museum ever since. It means to spread the life and work of one of the greatest poets in Chile, enabling access to the intimate world where Neruda lived, dreamed, laughed, cried but, above all, where he created.

A Very Special House
On the track of Neruda

The house-museum La Chascona is located in the Bellavista neighborhood, to be accurate, at 0192, Fernando Márquez de la Plata Street, where the alley begins.

« Back to Outings in Santiago