We visited La Sebastiana Museum, one of the houses dwelled by the famous Chilean writer and poet Pablo Neruda. Its corners feature the mark of its owner. 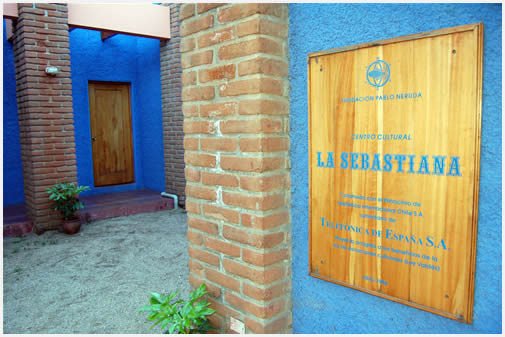 I built the house. First, I made it of air. Then, I raised the flag in the air and left it hanging from the sky, from the light and the darkness. Pablo Neruda  excerpt from To La Sebastiana

It is undeniable that the contemporary history of Valparaíso is closely related to the figure of the well-known Chilean poet Pablo Neruda and vice versa. It was in this city looking into the Pacific Ocean that, feeling tired of the noise of Santiago, the writer found a house structure located on Mount Florida with an endless view of the sea, where he could he could live and write in peace.
He called it La Sebastiana in honor to its builder, Sebastián Collado, a Spaniard who, after searching for a place from where he could have an entire view of Valparaíso, began to build this house with the purpose of living there when his children got married. Sebastián passed away. Fate and the search made by Sara Vial  a poet and a friend of Neruda's  plotted for its next owner to be the Chilean poet, who resolved to give it such a name claiming that even if don Sebastián did not write verse, he was a poet of construction. 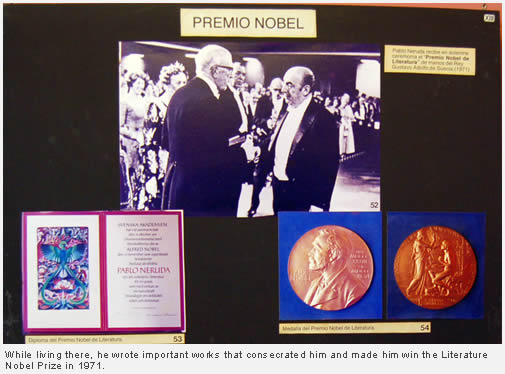 On September 18, 1961 Neruda inaugurated the house and invited his friends to celebrate. Ever since, he dwelled there for periods, especially for New Years Eve. While living there, he wrote important works that consecrated him and made him win the Literature Nobel Prize in 1971.
When Neruda died, the house was empty for a long time. It was the Pablo Neruda Foundation and Telefónica de España that managed to rebuild the legendary house inhabited by the poet. The exact color on each wall and the location of the paintings and objects of the poet were recreated in an attempt to find the way in which only he could distribute them.
Today, a visit to the past may be enjoyed inside La Sebastiana. In each of its five stories, visitors may discover the lifestyle and the most glorious and absurd moments of its owner. Besides, the work of the poet may be revised in various languages at the library and a racconto of his life may be done through an exhibition of biographical photographs. 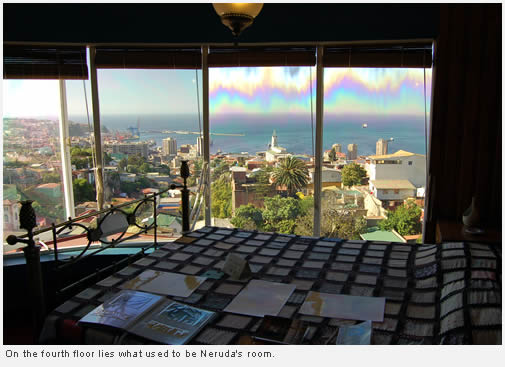 At the entrance of La Sebastiana, visitors may perceive this house is like no other. Each room was thought and decorated with a special intention. The site is crowded with dreams and hope. The ornaments are part of a great detail that makes this place unique, just like Neruda.
On the first floor, for instance, a wooden horse brought from Paris may be observed. A collection of colorful bottles of various shapes complete the decoration. On the second floor, there is a bar, behind which only Neruda could stand and prepare drinks for his friends, especially the drink called Coquetelón, a mixture of flavors with alcohol present in all his celebrations. 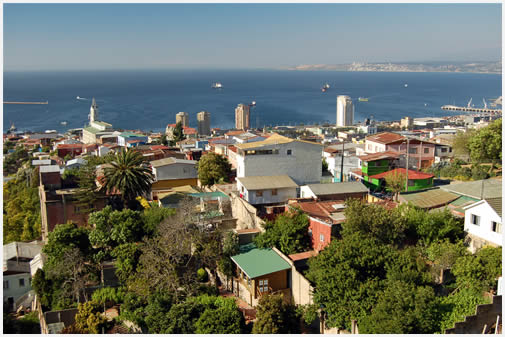 On the fourth floor lies what used to be Neruda's room. Next to the brass bed, Neruda installed lamps and a chest of drawers from a ship. "I am a sailor all mouth he would say, because he preferred to look into the sea from solid ground to sailing in the ocean. From there, he got an impressive panoramic view of all Valparaíso.
Outside, next to the house, stands La Sebastiana Cultural Center, where multiple activities such as exhibitions, conferences, courses and poetry concerts and workshops and vitraux displays are presented every year.
During your stay in Valparaíso, we recommend that you visit La Sebastiana house museum, a place where Neruda's verse will remain forever on the walls and the sight is lost in the infinite horizon spied on from every window.

I feel the tiredness of Santiago, I want to find a house to live and write in peace at Valparaíso. Certain conditions must be given. It may not be too high or too low. It must be solitary, but not in excess. I wish neighbors were invisible. I wish I did not see or hear them. Original but not uncomfortable. Very light, but firm. Neither too big nor too small, far from everything. But close to the stores. As well, it has to be very inexpensive. Do you think I can find a house like that in Valparaíso? Letter from Neruda to his poet friend Sara Vial.

From the center of Valparaíso, we recommend to take the Florida funicular. La Sebastiana house museum lies at 692 Ferrari Street, at the height of 6900 the height of Alemania Avenue.

from Tuesdays thru Sundays from 10am to 6pm.

At the time of touring around the rooms at La Sebastiana, we recommend that you read the explanatory descriptions at each room.

« Back to Outings in Valparaíso