Temperate Waters of the Caburgua 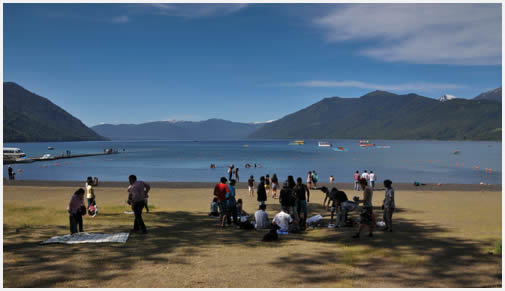 Lying close to the City of Pucón, Lake Caburgua seduces visitors with its temperate waters and its pleasant surroundings. Sunbathing, swimming, nautical sports or just enjoying the view are some of the activities available at this location.

We had resolved to spend the afternoon lying on the sand. Therefore, we left the downtown to drive for a short while across a pleasant scene. We went past the Trancura and Liucura Rivers on the way. Their waters are the setting of sports such as rafting and riverboarding. As well, two significant hot spring systems are close to this area. 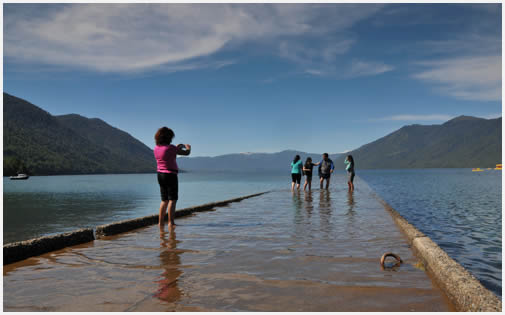 Besides, we could see the footbridge and the village of Queule. To one side of the airport, an old very narrow suspension bridge remained as a memory of former times. A larger busy road bridge was built next to it. We walked across both of them and took incredible photographs of the Lanín, Quetrupillán and Villarrica Volcanoes from the newer one. A Mapuche community has settled down at this spot and they offer their typical customs festival in the summer. On that occasion, visitors may enjoy their gastronomy and handicrafts.

A boulevard with cabins, restaurants serving typical Chilean dishes, supermarkets and handicrafts announced the proximity of the village that surrounds the beach. A beach of fine white sand welcomed us right in front of the lake. Lots of people were relishing a good day in the sunshine. We sat in the shade of some huge trees to behold the scene. 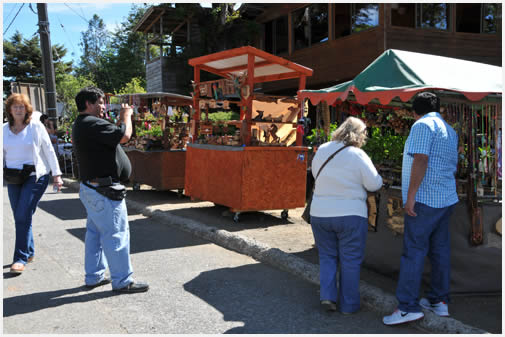 Some catamarans were ready to set sail and many colorful kayaks and sailing-boats moved slowly over the lake surface. After sunbathing for a while, we resolved to swim in the pure transparent waters. An instant pleasure.

One curiosity about Lake Caburgua is that it has two beaches that lie very close to one another and boast sands of different colors and geologic origin. They are known as Playa Blanca (White Beach) and Playa Negra (Black Beach). To reach the latter, we took a path parallel to the coast towards the left. It is quieter and its dark hues are amazing. Its magnificent mountain scene is as dazzling as in the former. 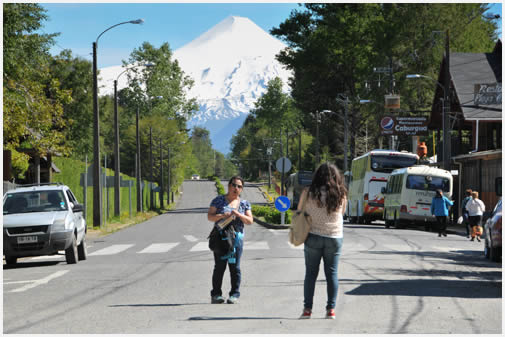 The Villarrica Volcano showed off its snow-covered top and its fumarole. In the late afternoon, as the sun was setting, the volcano was tinged by a soft pink shade. The mountain skyline became more evident in the distance and we bade farewell to the beach to return to downtown Pucón.

Take international Route 7 leaving Pucón towards Lake Caburgua. The total distance to be covered is 25 kilometers from the city center.

A park and two reserves remind us that this area should be enjoyed but also protected.

Security service is provided at the beach during the day every summer season.