Getting deep into the rocks and discovering the esthetics of the Marble Chapels is a dazzling and moving experience. 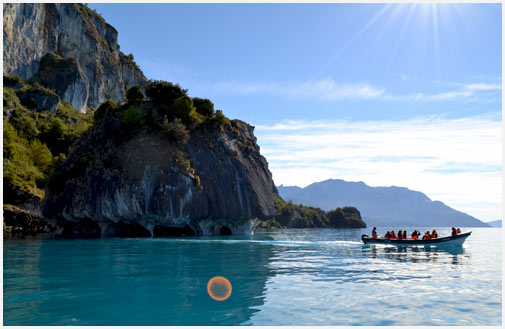 The village known as Bahía Mansa is located on a quiet road circuit within a very picturesque scene that joins Chile Chico and Puerto Ibañez. This small settlement on the coast of Lake General Carrera is the starting point for a memorable excursion: the Marble Chapels.

The winding road goes up and down countless times, always unveiling splendid sights on the lakeshore. After getting past several towns on the coast, we reached Bahía Mansa, where we got on board a motorboat in the company of experts who know their way around these rock formations and caves. There is no land access and the caves cannot be seen from the shore, either. 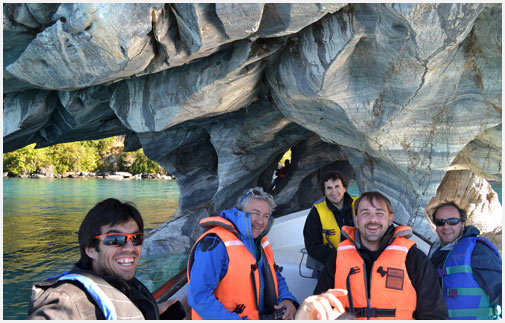 The excursion took us down to our destination in a matter of minutes, while we were informed about what we could see. Known as Sanctuary of Nature, they concentrate a set of islets called Marble Caves, Cathedral and Chapel. At this location, the lake waters have been breaking against the inside of these rock formations for thousands of years and they have polished the limestone until the marble seams were left in sight. The various hues of these walls made of calcium carbonate, quartz and limonite range from grayish blue to pink and pure white shades. 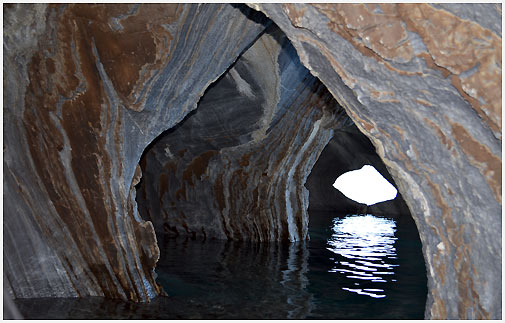 From a distance, we could observe the shape of those huge islets cut out on the skyline and giving origin to a chapel, a dogs head and a cathedral. When the time came to access the caves on board the boat, we started to find our positions on the watercraft to catch a better glimpse. We got our cameras ready to record that moment. 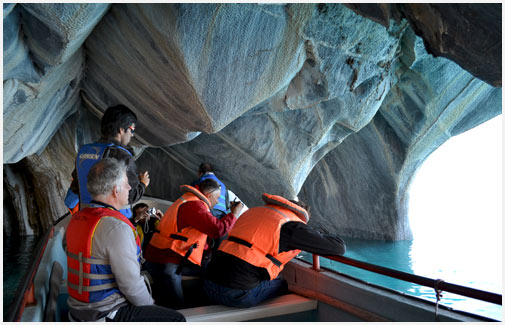 Once inside, several passengers landed on some small head lands to touch the rough surface of the rocks in the intricate galleries and get a different point of view of the external openings. The movement of the water and the color of the marble walls gave a turquoise tone to the inner light. It was incredible to see how it tinged us too.

As we moved from one nook to the next some of them more spacious, others narrower- we got more and more thrilled. We entered the cathedral and the temperature appeared to drop. No one really cared, though. 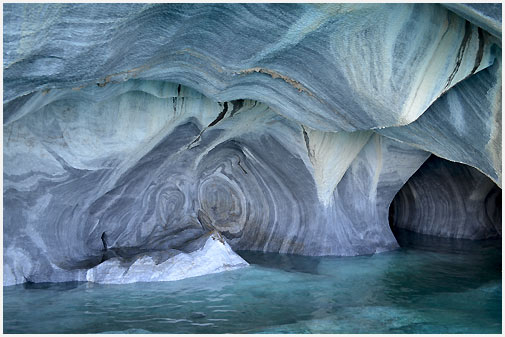 We were really lucky to go on this tour on a sunny day without wind. When the weather is fine, even kayaks may reach the rock formations, always during the daytime. There is another starting point for this outing, located a few kilometers ahead. However, Bahía Mansa is the closest. We bid our farewell to these natural architectural masterpieces in the knowledge that we had seen a unique treasure.

To Take into Account
How to Get There
The distance from Chile Chico to this point is 166 kilometers and in turn Puerto Ingeniero Ibañez lies 171 kilometers away. These are two international passes between Argentina and Chile.
Before setting out, check road conditions and make sure the Marble Chapels may be visited. The Chapels lie 225 kilometers away from Coyhaique following the Southern Road.

« Back to Outings in Chile Chico and Lake Gral. Carrera