Its summit is crowned by a soft but constant fumarole and shows slight inner activity, which turns it into an active volcano. THIS EXCURSION IS NOT AVAILABLE AT THE MOMENT. 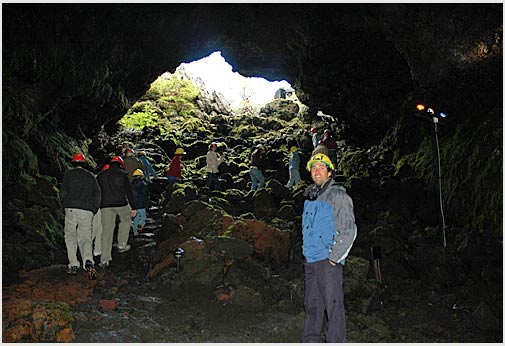 Cut out on the skyline that separates Villarrica from Pucón, the Villarrica Volcano is part of the daily life of these villages used to its continuous smoke which tinges the sky in red at night. It is an amazing fact that its caverns upholstered in lava from past eruptions may be accessed.

We got to the hillsides of this geological structure in the company of the guides from the travel agency we had contacted. Once we reached the place known as Casa de los Volcanes (Volcanoes House), we were given a preview of what we were just about to see. We would get deep into the mountain, where inner galleries have been carved by the minerals from ancient emissions of solid, liquid and gas.

It is known as Rucapillán or house of the devil in the Mapudungun tongue. Wearing a helmet and carrying a flash-light, we took turns to enter one at a time and descended slowly. The soil and the walls were quite irregular. We had to be extremely careful and watch our step so as not to hit the sharp rocky edges. Some ladders set at strategic locations helped us move from one level to the next inside the galleries. 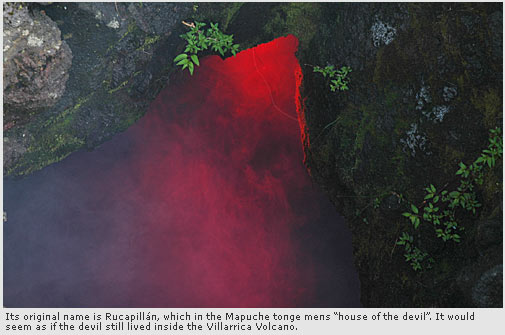 As the group gathered at one point, the guide said: There are still vestiges of the 1971 eruption, when a 10-meter-thick and 200-meter-wide lava torrent came down from the crater towards Lake Calafquen and dragged along several rural settlements.

Thus, we discovered how the masses of solidified lava coming from those magma movements settled down in the underground ecosystem. We had got 45 meters underground and we had a strange feeling: we were inside a volcano that has shown its rage and is still alive.

Then the guide asked us to turn off our flash-lights and remain in silence in complete darkness. We could not even see one another. It was a short but intense experience at the last stretch of the tour. Shortly afterwards, we came out into the daylight in the outer world. Without having understood completely the science that deals with volcano behavior, the sensation of its inner force and the smallness of human beings before the actions of nature was quite clear. We were also aware that a monitoring station operates in the area. It is a fundamental fact for all visitors to this region.

Take Panamericana Road from Villarrica to Pucón up to the detour to the right towards the ski center. Drive along 9 more kilometers to reach this destination. The road is properly sign-posted.

To be confirmed at the local tourist office as it changes during the year.

« Back to Outings in Villarrica