"I declare my love for you, Valparaíso"

A stroll connects visitors with history and the most beautiful sights in the city. We toured around the historical shell, declared World Heritage by UNESCO. 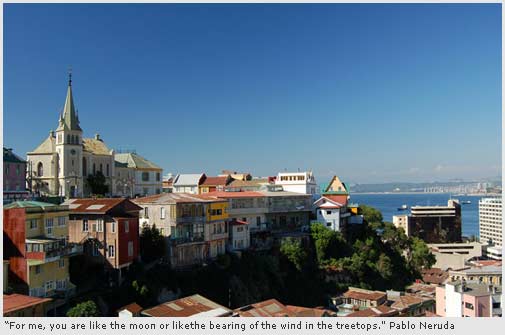 Located opposite the vastness of the Pacific Ocean, the City of Valparaíso is hard to forget. Its typical morphology, its architecture, its means of transportation, its vivacious colors and its life facing the port make visitors fall in love with this piece of land in the same way as well-known poets, writers and artists have.

The historical shell of Valparaíso was declared World Heritage by UNESCO in 2003. This significant designation implies that the Jewel of the Pacific as popularly known- has been universally recognized as an invaluable asset from the architectural, historical, anthropological and cultural point of view. 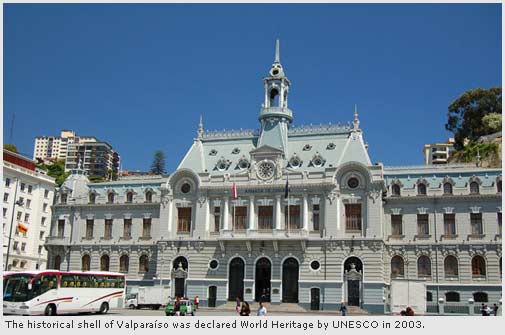 In our visit around the city, we wished to walk about the lanes in the historical shell and see the merits leading to such designation for ourselves.

Sotomayor Square was our starting point. There we saw the Prat Monument, which represents the heroes from the Iquique sea battle. The former Intendency Building, which today is the venue for the Chilean Navy Comandancia en Jefe, stands in the background.

Turning left, we came across the Court Building and El Peral funicular. We paid a small amount of money in order to go up Mount Alegre and see the Yugoslavian Promenade, 45 m.a.s.l. From there, visitors can behold a fascinating view of the port. The place is surrounded by buildings from the early XXth century. Our sight was overwhelmed by the infinite number of houses of various colors that seemed to hang on a thread from the steep hill.

We continued always on foot, passing by the Fine Arts Museum. Behind it, we found Baburizza Palace, a four-story building built in the Art nouveau style. 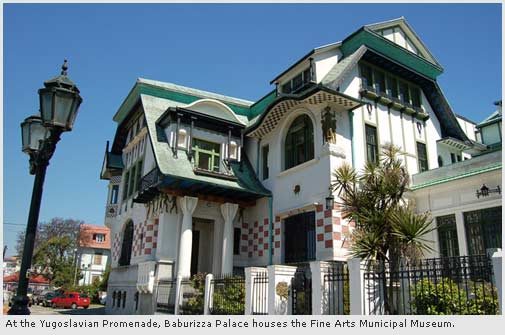 We went up along Montealegre Street and at Leighton, on the Miramar corner, we went down along the narrow Bavestrello passage up to Urriola Street. At that point, we felt as if we were inside a labyrinth, surrounded by ancient houses and stairs going up and down. Afterwards, we had to cross Gálvez Passage, which starts with a steep staircase. After walking down four blocks, we came into Papudo Street, where the Gervasoni Promenade is located. We observed the houses with smooth façades and multiple colors. A significant amount of small hotels and restaurants operate in this part of the city.

At Gervasoni Promenade, we had a break to breathe in and behold the sea from the cliff surrounded by a railing of cast iron. That moment seemed to last forever but we resumed our march towards Lukas Viewpoint House and the Concepción funicular. This particular house with a viewpoint presents a permanent show of 300 works of art made by draftsman Renzo Pecchenino Lukas, which tell the story of the city. 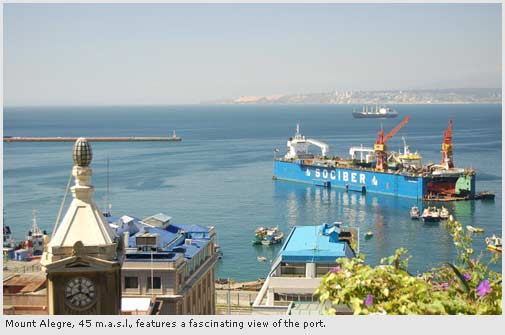 We passed by the Concepción funicular but did not take it. We continued along Papudo Street up to Atkinson Promenade. This point displays the entire coast, from Viña del Mar to Valparaíso, the mounts surrounding the city and a very impressive view of the commercial center. The houses in the area have a small garden in front, a smooth façade covered in zinc and large single-hung sash windows, faithful reflection of the taste of their former English owners.

From this point, a beautiful sight of Aníbal Pinto square may be appreciated. The Luteran and Anglican churches stand around it.

We stopped for a rest and watched the slow and anachronistic movement of the city from the yard of the famous hotel-restaurant and pub called Brighton. This place has a typical Victorian architecture style built with material recycled from ancient buildings. Its terrace hangs over the harbor and is an ideal place to have a cup of coffee or a snack to recover our energies as the soft breeze of the Pacific strokes our body. 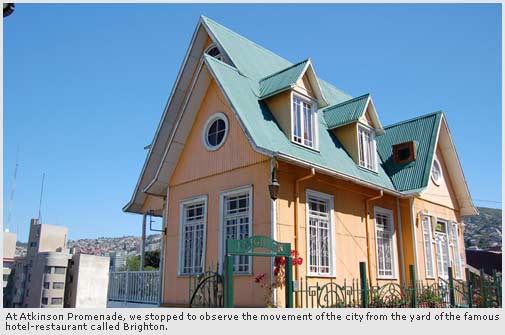 To call it a day, visitors may go back to the Gervasoni Promenade and take the Concepción funicular, which ends at Prat Street, or else reach Almirante Montt Street up to Dimalow Promenade, to go down on the Reina Victoria funicular, which reaches Aníbal Pinto square.

Thus, we toured around the historical center of the city. Not only did we observe its houses, promenades or squares, but we also discovered the idiosyncrasy and lifestyle of the dwellers of Valparaíso, who move about this open air museum almost mechanically, watching the past, the present and the future mingle into one dimension so that the magic of this place continues to make visitors fall in love with the famous Jewell of the Pacific.

Half a day, depending on how many stops you make.

In order to go on this tour, it is necessary to follow this description strictly. Another alternative is to go to the Tourist Office and ask for assistance.

Take some water to drink during the tour. Read about the city and its tours beforehand so as to appreciate the visit better.

« Back to Outings in Valparaíso