A surprise awaits even in the remotest corners which can only be reached by boat during this appealing outing full of tourist attractions. 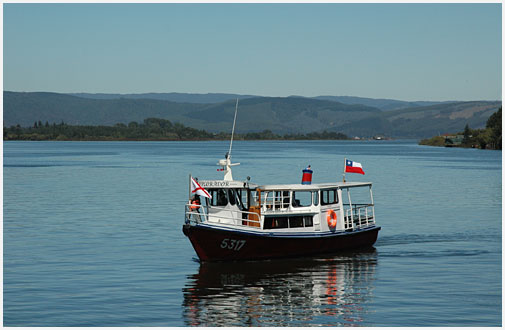 The fish market, known as Mercado Fluvial, is really interesting both for its intense fishing trade and for being the starting point of many boat trips. Reina Sofía, a catamaran, was the one we boarded for a spectacular ride along the Valdivian waterways.

Once we had found our places and been given a warm welcome, off we went. The sun made the water sparkle which seemed to augur a wonderful day. Our guide described the landscape we would be cruising by and it soon became clear how fond he was of his birthplace, the area along the iconic Calle Calle River. As we sailed under the Pedro de Valdivia bridge we caught sight of Collico the old steam boat which had transported passengers, goods and even small boats for such a long time it is still held in high esteem by the locals. 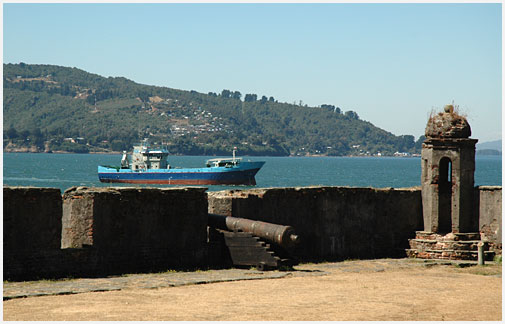 As we left the city behind, we cruised by a shipyard on the Calle Calle River and the Universidad Austral de Chile before heading towards Cruces River
Nature Sanctuary, a wetland with abundant native aquatic plants and birds such as red-gartered coots, cranes and black-necked swans. We then reached Cau Cau, Cruces, Guacamayo, Angachilla and Naguilán Rivers which we learnt a lot about besides enjoying the amazing wildlife and landscape.

We sailed further and further into the lush green, damp, exuberant Valdivian forest. Fishing and sailing boats added even more color to the surroundings. Bewitching stories and legends came up during the conversation with our guide, making our trip really entertaining. 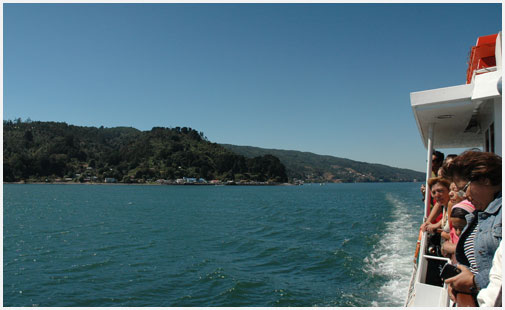 The catamaran then veered towards the Niebla coastline, the port at Corral and Mancera Island. Behind us was Teja Island and Cruces Bridge joining Valdivia to the coast by Niebla, Los Molinos and Curiñanco. Its pyramid-like shape allows the passage of large ships.

As we smoothly navigated Valdivia River, we spotted some remnants of the 1960 tsunami which ravaged this coastal area and destroyed so many ships. Many sunk nearby 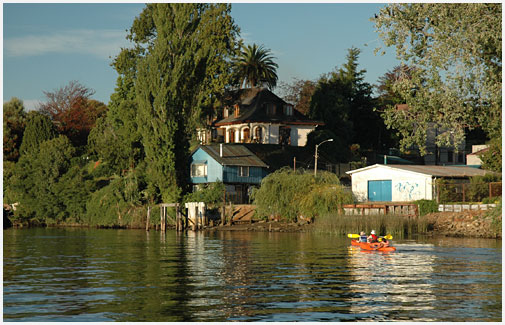 A port with a story to tell

The Reina Sofía docked at Corral port where we disembarked to visit Fort San Sebastián de la Cruz, one of seventeen Spanish forts built in the XVII century. We then moved on to Fort San Pedro de Alcántara on Mancera Island where we were surprised by the history of San Antonio Church, dating back to 1748.

All the forts were built on strategic locations to defend the deep waters of the ports from enemy attacks, although each had its own characteristics according to its specific functions. Old cannons, sentry boxes, long walls which let our gaze wander along the seemingly endless sea horizon giving us some inkling into the life in these coastal forts. 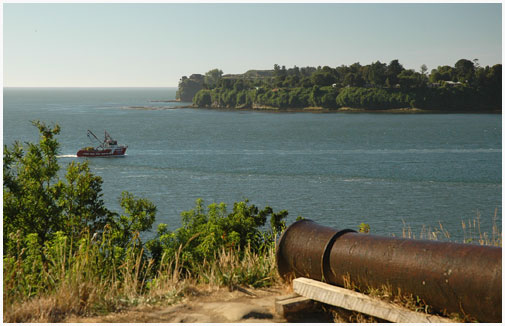 On the way back to the pier at the Mercado Fluvial we gradually came back into contact with civilization. Our trip along the main seven waterways in Valdivia and our encounter with an important chapter in Chilean history had come to an end.

from the center of the city main square walk along two blocks towards the river, till you get to the waterfront.

Embarkation on the catamaran starts at 1pm at the Schuster pier.

take sun protection and warm clothes to be worn after sunset, as the temperature drops considerably. It is an excursion for the entire family, without age limits.