From the heights amidst the forest and in the company some cows pasturing, we saw how the placid lifestyle of this town develops. 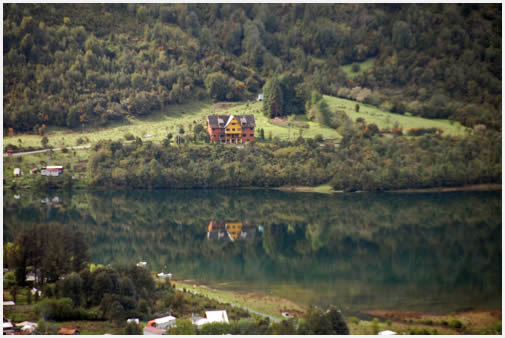 When the idea is to get to know a place completely, there is nothing more pleasant than going for a walk and seeing every nook. As we reached Puyuhuapi, we were invited to go along a trail that leads to a vantage point offering a spectacular panoramic view.

We accepted the challenge and, accompanied by Luisa Ludwig, who has lived there for many years, headed for that destination. We started at the shore, near the old pier, where a sign gave us the directions we needed to go up to the vantage point and not get lost.

We slowly took the trail marked with logs painted in red and white. The short green grass looked as a private garden and led us through a trail featuring light difficulty in the first stretch.


Do Not Get Lost

The trail was laid out many years ago, but recently, a group of youths devoted to hiking activities worked hard to settle the painted posts that make the route safest, our hostess commented as we walked.

Our conversation was interrupted once in a while by a very silent atmosphere, which those of us arriving from noisy urban centers appreciated very much.

It is not a hard terrain, but the second stretch became a little bit steeper. We did not change our rhythm, as the idea was not to break any records but to reach the higher parts. At one point, we had to cross a fence and go up a staircase made of wood to save an obstacle without any effort. 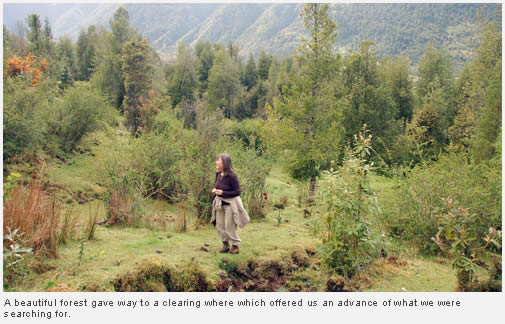 We went off the trail a couple of times to watch some low plants and make out chilcos from calafates. We spotted some myrtle trees with their reddish very soft bark.

We were not the only ones following those trails: some cows looked at us impassively. A beautiful forest gave way to a clearing where which offered us an advance of what we were searching for.

Adventurers may stop as many times as they wish. There will always be something nice to see. Already at the vantage point, a bench invited us to rest and behold the huge valley interrupted by the mountain range. 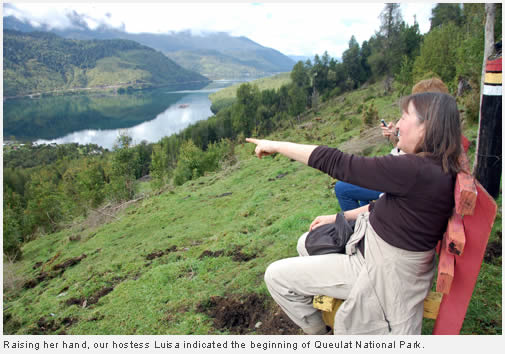 Raising her hand, our hostess Luisa indicated the beginning of Queulat National Park as well as the winding Pascua River and the huge rhubarbs on its shores. Its very large red flower and its edible stem turn this into a really appetizing plant.

As the first families began to settle down, they built their houses following the river course appearing before our sight. Houses here and there without any fix rule concerning urban planning gave Puyuhuapi an irregular layout and winding streets. Old grand houses from the original settlement appeared before us.

Luisa gave us an imaginary location of Lake Risopatron, which, even though beyond our sight, lay 180 meters above the town. We made a promise to see it on our next outing.

We let our eyes get lost in the fjord and enjoyed the almost perfect quietness only interrupted by the river murmur and the voices reaching the heights from the village. 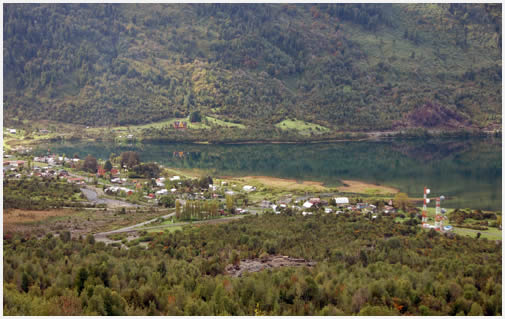 Returning was easy and we did not need to make any efforts. We promised Luisa that we would take a hiking tour following Los Colonos (the Colonists) trail, with a map she gently gave us to find our way.

The trail to the vantage point is a must and it is worth devoting a couple of hours to hiking and getting the best view from above. 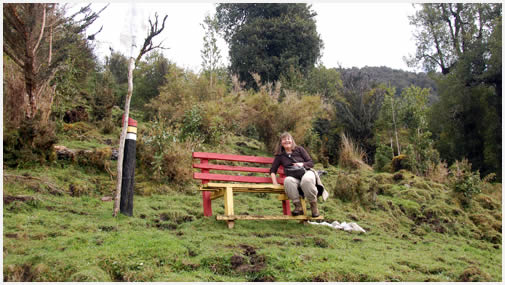 This activity may be enjoyed at any time of the year.

« Back to Outings in Puyuhuapi