These large and harmless cetaceans usually show off their moves and surprising immersions in a rhythmic dance in the water to the passengers delight. 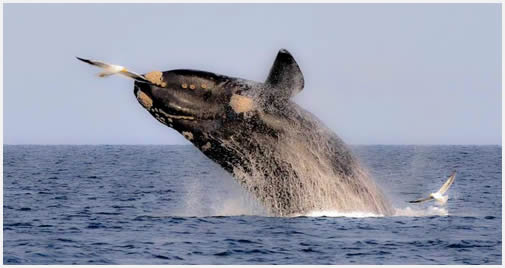 The City of Punta Arenas is the starting point for an outing leading to Francisco Coloane Sea Park. Once there, the humpback whales and other species may be observed from a close distance.

As there is no land route towards that area, we hired a sea tour at an agency. We set sail at Prat Pier so early that it was still dark. As we were having a comforting cup of coffee that would wake us up completely, we were wrapped up by the soft hues of dawn.

We were eager to find those water giants. The guide gave us information about this sea reserve and its customs, and she told us about how these whales do not represent any kind of danger for navigation. 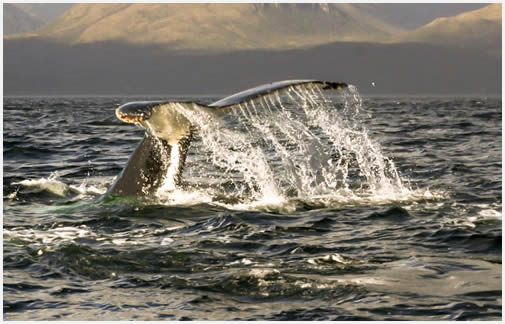 As the day broke, we spotted two historical landmarks: Fort Bulnes and Cruz de los Mares (Cross of the Seas) on Cape Froward. We learned about the importance of this area in former times.

We finally reached the park and the long expected whales appeared here and there. They approached us without haste, as if they were lurking around us. Strong hits with their tails, unknown sounds and dives followed one another in front of our attentive look.

After disappearing under the water, they would emerge strongly and dive back in leaving just their tail as a kind of greeting. We noticed they were curious and joyful and that helped us overcome our initial fear. 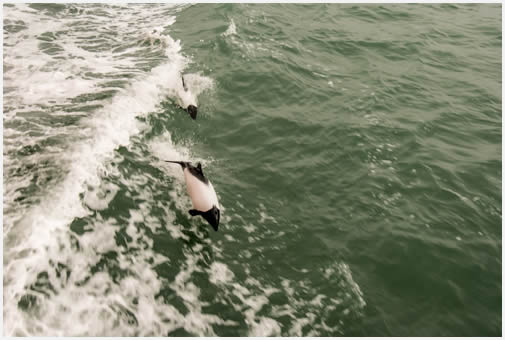 We were told that these mammals come from the tropical seas next to the Equator and that they travel thousands of kilometers in the company of their life partner and calves to this southern zone, where they can find good food based on large quantities of high-quality krill and plankton, which motivate them to come along. They are also lured by the lack of human and animal predators at this location.

This reserve is also dwelled by sea lions and elephant seals and a large colony of birds such as Magellanic penguins, skuas, cormorants, petrels and albatross.

At noon, the crew served lunch inside the boat. We had a short rest from the cold air and wind on deck, which undoubtedly was an ideal spot for photos and videos. In turn, we talked to our fellow passengers about our experience and continued admiring the scene through the large windows. 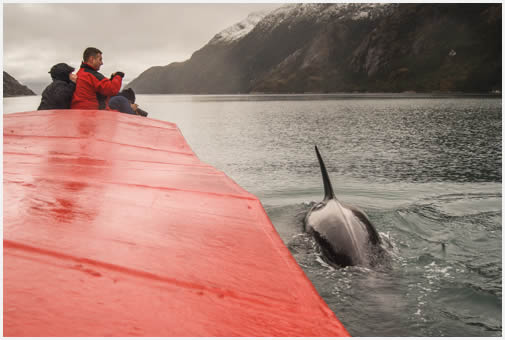 When we went back outside, the whales were ready to show us an incredible music concert. As part of their playful behavior, they produce high-frequency sounds to communicate. The guide made us notice the spots or callosities on their backs. These marks identify them as they are unique on each animal. Each blow was accompanied by vapor that came out of their nostrils.

It was time to head back. We had a last look at those colossal heads and tails after having unveiled the mystery of their lifestyle. The sun was setting and the light made the circles left by the whales on the surface as they swam more noticeable.

The sea route looked different in the twilight. We observed the colors of the native forests, the glaciers and every treasure the sky, the sea and the land had prepared for us to grasp a memorable view. 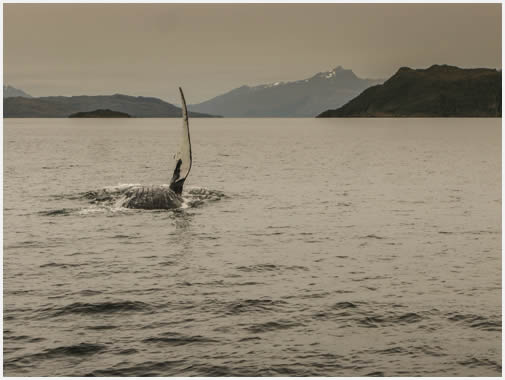 05:30 am Zarpe, from Punta Arbol pier and start navigation through the legendary Strait of Magellan, observing the majesty of the sunrise by Tierra del Fuego, Fuerte Bulnes first settlement of the region.

07:30 am-0830 am Pass by Cabo Froward, the southernmost point of the American continent, where the cross of the seas stands out.

Weather conditions:
In case the weather conditions do not allow us to sail we have the option to reschedule for the next date, please take this factor into account when booking.