Sailing to Balmaceda and Serrano Glaciers

Sailing the fjords towards Balmaceda and Serrano glaciers is a classic for visitors to this part of the world. 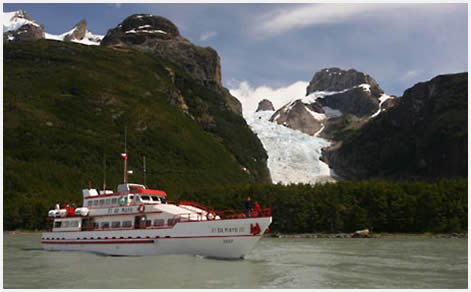 The Southern Patagonian Ice Field, a world freshwater reserve, is practically a neighbor of Puerto Natales. An unforgettable cruise takes visitors to some of its glaciers.

We set off from the local public dock towards Bernardo de OHiggins National Park, the largest in Chile. Once on board, the vessel slowly cruised along Última Esperanza Sound and we soon caught sight of Mount Balmaceda standing out from the rest in the distance. We continued along breathtaking channels and, wrapped in warm clothing, challenged the prevailing west winds on deck, taking in every detail while enjoying the crisp air on our faces. 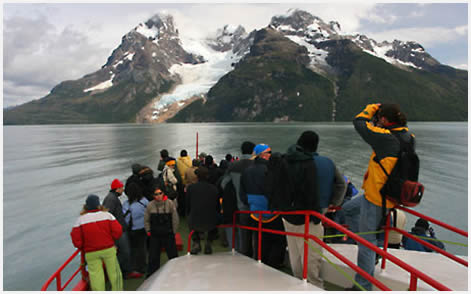 We were surprised by the dense vegetation of the surrounding mounts and by the thawing falls pouring on to the coast. Over the loudspeaker, we were given information about the places around us as well as really interesting details such as the remains of the Kawésqar and Alacalufe cultures. We had been sailing for about two hours when we came upon a cormorant colony at Punta Barrosa. These birds, like penguins, stay in the area throughout the summer until their young learn to fly.

The landscape gradually became more rugged, surrounded by huge mountains as the swaying boat kept a leisurely pace. After quite some time, we decided to go back to the cabin to warm our freezing hands and faces. 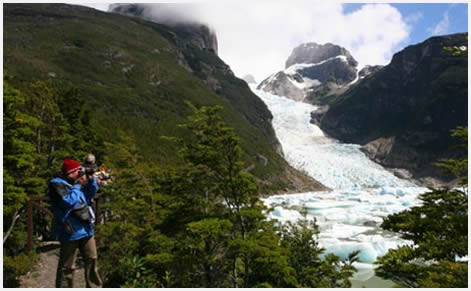 It took about three hours to finally get a close up look at Mount Balmaceda and direct the prow towards the glacier. As is the case with other ice masses around the planet, global warming has caused the glacier to retreat. We could not help thinking about its slow, unrelenting melting process as we gazed in wonder at its infinite shades of blue.

While we continued on our way to Serrano Glacier, we sipped pisco sours, like only Chileans can prepare them, and tasted some delicious salty appetizers.

Four hours had gone by when we docked at Puerto Toro and disembarked to take a 1000-meter-long walk along a path in the National Park. It was an easy, incredibly silent trek in the native coigüe forest. Back on board, we watched some ice floes drift by in the whitish water of the lake.

The impressive white wall was about twenty meters high and behind it, the white tongue of the glacier stretched all the way to the horizon. We were looking at other smaller formations in the basin when suddenly a massive chunk of ice broke off and fell into the water. The cracking sound was unbelievably loud and the spectacle priceless. Astonished as we were, we almost missed filming this amazing display. A huge wave reached us, clearly showing the force of these million-year-old blocks of ice.

Although this freezing cold climate may not be ideal for sailing, passengers just accept the wind and the low temperature throughout the itinerary as it enables them to witness such marvels.