Lake Crossing in the Andes

Chile and Argentina share a border rich in extremely beautiful rainforest scenes and intricate itineraries used by the colonists to exchage goods. Today, everything is simple and pleasant. 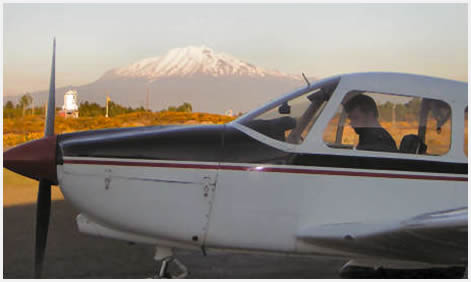 The wish to see the world from the sky lives inside every one of us. While in Puerto Varas, we gave full rein to our yearning when we heard that baptism flights left from the local airfield.

You may get a clearer idea of the scenes of this area in southern Chile, with forests, lakes, estuaries and islands. This landscape was shaped by emerging volcanoes and the abrasive strength of the water and the wind. Those were the words of the pilot, Santiago Vidal, shortly before we got on the airplane with the purpose of flying over the volcanoes.

We got on a twin-engined plane carrying 5 to 7 passengers. As soon as everything was ready, the plane began to taxi. In a matter of seconds, the nose was pointed up and we left the ground. At first, we spotted some sown fields and Lake Llanquihue plainly. The Cities of Puerto Varas, Frutillar and Ensenada appeared below us and, soon afterwards, Puerto Montt and the blue sea with its watercrafts and fishermen became the protagonists. It was fantastic to observe the shape of the Reloncaví Inlet, Chiloé Island and the mouths of the main rivers. 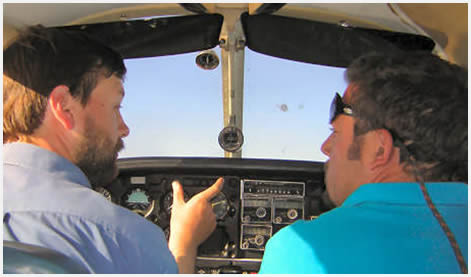 It goes beyond saying that Santiago commented on everything we saw at the same time he was piloting the plane. We made an effort not to miss any detail or name. His finger pointed at the Calbuco and Yate Volcanoes, Mount Puntiagudo, Lakes Chapo and Todos los Santos, Rupanco as well as Alerce Andino and Pérez Rosales National Parks. He marked the source of the Petrohué River and we could even see some of its waterfalls. Farther ahead, we appreciated Puyehue National Park, and behind the Argentinian border, Mounts Tronador (with its black glaciers) and Catedral. Suddenly, we saw a huge white massif and recognized the Lanín Volcano, which seemed to control the air space with its high altitude.

There was another amazing moment when our host changed direction and we were headed for the Osorno Volcano. Featuring dark green and black shades, its white summit and the snow spreading down its hillsides, it impressed us for its gigantic volume and different hues. Photos, photos and more photos were necessary to immortalize such a moment. We flew around it to observe every detail and were hypnotized by its magnetism. As he heard our comments, Santiago showed his pride for a volcano that represents this zone of his country so well. 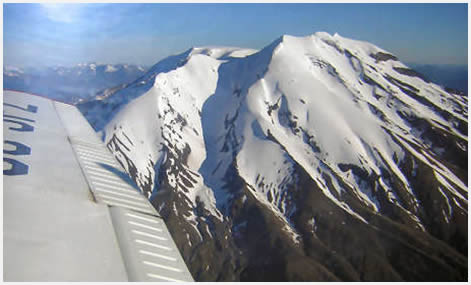 Some minutes afterwards, we landed in Puerto Varas with the feeling of having enjoyed a unique experience. We thanked Vidal for the ride and his explanations. We felt deeply moved as we learned that this is one of his favorite flights. In his company, we had relished the stateliness of the southern Chilean volcanoes.

The flights leave from the airfields of Puerto Varas or Puerto Montt, generally on sunny days. Timetables change according to season and weather conditions.

To be arranged with the people from Sur Marino.

If possible, it is recommended that this flight be made on cloudless days in order to appreciate each one of the alternatives offered by geography and the presence of man in nature from the air.