Sea and Land in Aysén

With an incessant pace that makes contrast with the calmness of its people, this city is a must visit on the road to nooks of matchless beauty and ancient glaciers. 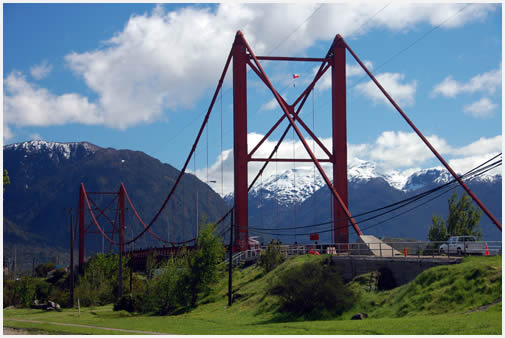 Touring around a paradisiacal geography, we left the road to get into the very busy streets of Puerto Aysén. Its daily routine seemed quite intense and we learned that it decreases its rhythm during the hottest hours of the day.

The presence of the Aysén River, its green banks and the huge suspension bridge joining both areas of the city were the elements that caught our attention. Everything lies close in the city: the main streets, the restaurants and the sights.

We surrounded the main square. Trees with huge canopies and flowers border it. A large number of passers-by were resting in the shade of walnut trees and conifers looking for protection from the midday sun. In that area, we saw the main public offices and the church cathedral.

We crossed a footbridge to visit Díaz Island. Surrounded by the river, we toured around its green area and observed the wonderful sight of the mountain range that encloses the city.

We thought it was a perfect place to go for a walk, enjoy a book, or a conversation with friends at sunset. We saw its stage in the open air and imagined the anniversary festival held in January every year with a great audience who long to see their favorite artists.

On our way back to the downtown area, we went up a staircase to Mount Mirador. It is not very high but it features a nice view of the city, the river and the mountains. 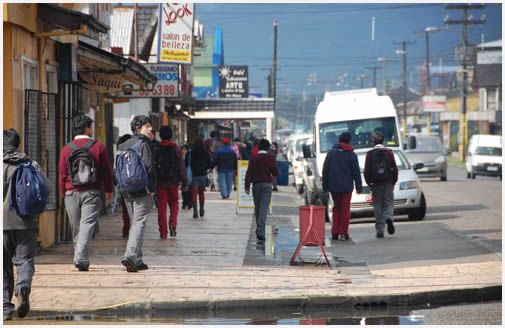 Aiming the Prow towards the Sea

At any corner in town, nature in unimaginable green shades is the common denominator, and so is the mark left by fishing activities from former times.

A settler told us: Until the 1950s, the port of Aysén used to be accessible for large deep-draft vessels and fishing industries contributed to the economic growth of this area. Later on, erosion had an impact on the riverbed and only smaller boats could get to port.

Following OHiggins Street, we came to puerto de Aguas Muertas (dead waters port), where we saw a great deal of colorful fishing boats waiting for the high tide in order to get out of the estuary out to sea. At this spot, tough men, used to challenging the wind and the waves, were performing maintenance tasks until the tide would let them set sail. They were accompanied by music coming from the island.

We continued down OHiggins Street towards Lake Los Palos and its port. A zone of sudden changes in the vegetation and the mountains, with plenty of rock at sight. In this wilder area, the air was fresher. We ended the sea tour with the image of Saint Peter, patron saint of fishermen.

We slowly returned to the center of town and walked along the main commercial street, namely Sargento Aldea. Once again, the rumor of a city that lived, acted and developed with vigor. Its wide sidewalks offered comfortable wooden benches to sit down and have a rest. 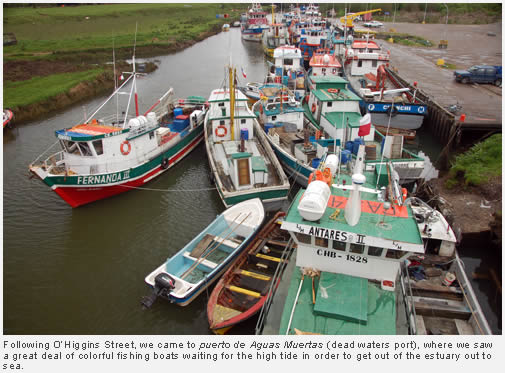 We would cover the entire circuit by car, except for those sites where we felt like walking. When he had finished our tour around the city, we saw the Presidente Ibáñez suspension bridge, which joins both banks of the Aysén River. Considered one of the longest in Chile, it was declared Historical Monument and its two 25-meter-high metallic arches and its strong steel cables offer a show of the power and stiffness that makes contrast with the green nature around.

The ancient snowdrifts and ancient ice fields at the Laguna San Rafael National Park are the main attractions for visitors to Puerto Aysén. But that destination has much more to offer.

As our excursion ended, we had the impression of a city with countless activities to learn about. Thanks to the help provided by many of its dwellers, we could come close to each of them. 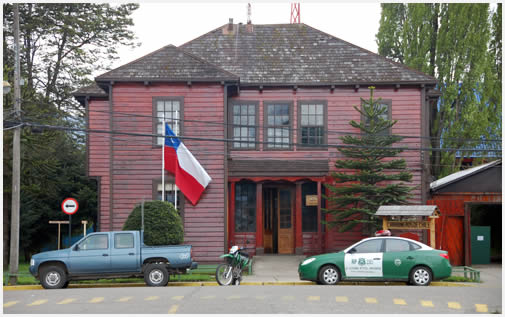 Print this outing
« Back to Outings in Puerto Aysén