A Window onto the Past

In the heart of the green Hurtado River Valley lies the Pichasca Natural Monument. This site of remarkable archeological, paleontological and geological interest is considered by specialists as a window onto Chilean pre-history. 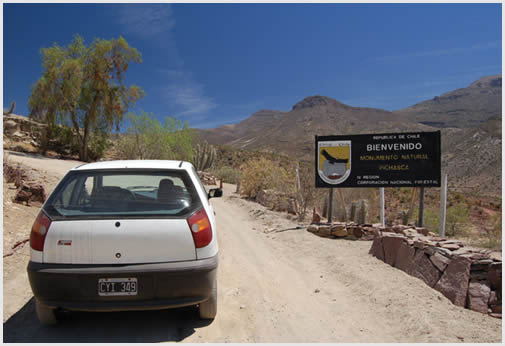 The park lies 55 kilometers from Ovalle and forms one of the natural protected areas in the country where it is possible to come into direct contact with petrified logs and findings of dinosaur fossils on the rocks, even to reach a rock eaves used as a human shelter 10,000 years ago.
To get to this Chilean "Jurassic Park", we left the capital city of Limarí Province along Route D 595. After 17 kilometers, we went past the crystal-clear waters of the Recoleta Reservoir, which contains 100 million cubic meters of water. At this point, we entered the Hurtado River Valley and the beauty of the place began to be outlined. 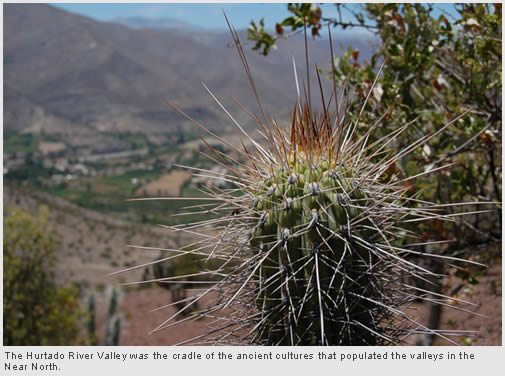 The road is paved up to the district of Samo Alto. During the ride, we came across hamlets like Tohuinco, Tabaqueros and Huampulla. In Samo Alto, the ancient square and the local church are outstanding buildings.
Farther ahead, we found the San Pedro Norte hamlet. After crossing the bridge over the Hurtado River, we faced a steep slope up to Pichasca Natural Monument, managed by the Corporación Nacional Forestal. (CONAF).
The panoramic view is beyond compare. The mounts full of cardons, quiscos, olivillos and peppers make a great contrast with the intense green of the valley.
We began hiking across the 128 hectares of the park. The site has an Environmental Information Center where local flora and fauna specimens are displayed, and information about the paleontological and archeological discoveries of the region is provided. 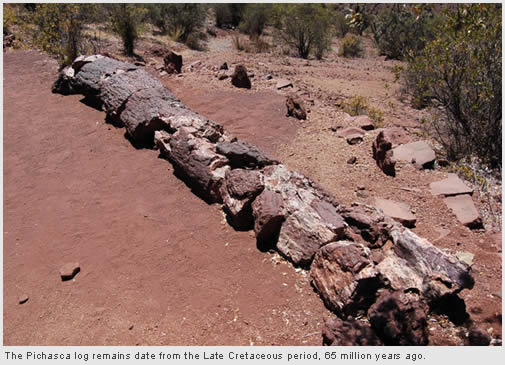 After a few kilometers, we began the hiking tour -which lasts from 40 to 60 minutes- along a path which goes deep into the hills. We stopped at the signaled points to have a better understanding of the place we were visiting. There are large notice boards along the path.
We moved forward along the correctly outlined path and we stood in front of a cemetery of petrified logs. It was amazing to admire these pre historic trees. These rocks, which may be over 75 million years old, were formed as a result of the replacement of the organic elements of the trees by minerals like silicon. Many of these samples have been joined together as if they were a puzzle, for a better appreciation. 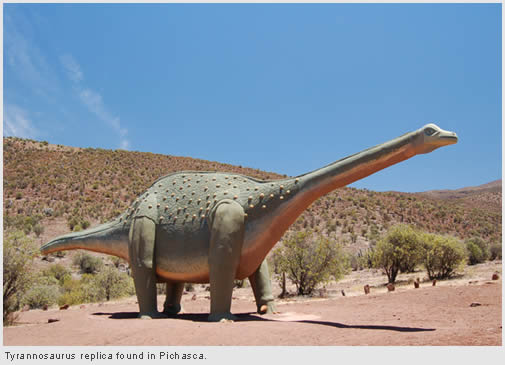 We continued hiking under the intense sunshine, typical in this area. The Pichasca continuous silence took over the atmosphere. Our next stop was where the remains of a dinosaur which belonged to the titanosaurus family were found. Strictly speaking, the finding was not complete: some ribs, vertebras and a humerus belonging to an Antarctosaurus wichmannianus dinosaur were also found, as well as turtle shell sheets.
At the end of the path, we entered two other important areas of the park, which make the pre-historic status of the venue more attractive. First, we saw the model of a titanosaurus similar to the one found there, in real size, located on a large terrace. 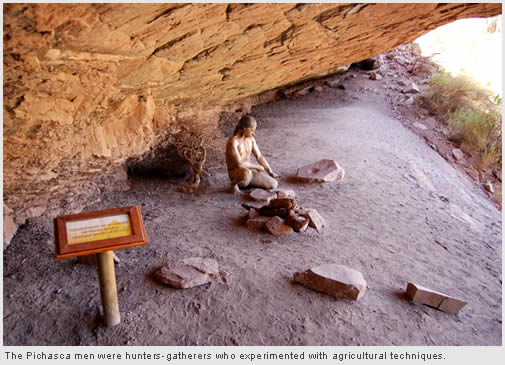 Then, we headed to a rock which is a kind of cave used by men who arrived there seeking for protection on their crossing of the mountain range towards the ocean, 10,000 years ago. Human settlement remains, such as basketwork items, food, arrow tips and cave paintings on the ceiling were found there. On one of its sides, we observed a painting that made us imagine how life used to be like. 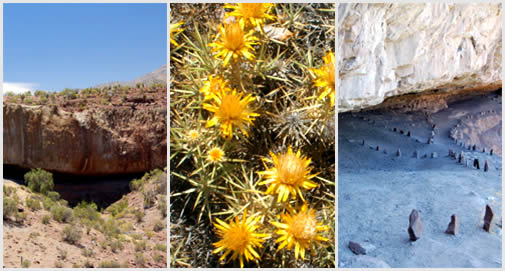 Thus, our visit to the Pichasca Natural Monument came to an end and, for a moment, we had the feeling of having enjoyed a journey back in time. When visiting the IV Region of Chile, do not miss Pichasca, a jealously kept jewel in the heart of the Hurtado River Valley, an imaginary window onto the past which testifies the different processes this land went through hundreds of thousands of years ago.

1.30 hours by car from Ovalle to the Pichasca Natural Monument. Once there, the tour may take 2 hours approximately.

The Pichasca Natural Monument is located in the district of Río Hurtado, IV Region, in the higher lands of San Pedro Viejo. It is accessed through the Ovalle  Hurtado River Road, going past the Recoleta Reservoir. After Samo Alto town and 2 kilometers before Pichasca town, take a road that crosses the river and gets to San Pedro Viejo. It is also possible to get to this road across Vicuña, Hurtado River and Andacollo  Samo Alto.

The Park offers toilet facilities, an information office with brochures about the Natural Monument resources and a place for cold picnic (no campfires allowed).
The path may present a higher level of difficulty for those adults who are not used to walking, due to the steep slopes and stifling heat.
As the area is exposed to strong sunshine almost every day of the year, it is necessary to wear sunscreen, enough water and hats or caps, and it is advisable to be in good physical condition to avoid any inconveniences.

« Back to Outings in Ovalle