Lake Rosselot and its Plentiful Fishing

We went sailing on board a small motorboat until we reached the flumes, where there is always a good surprise on a fishing day. 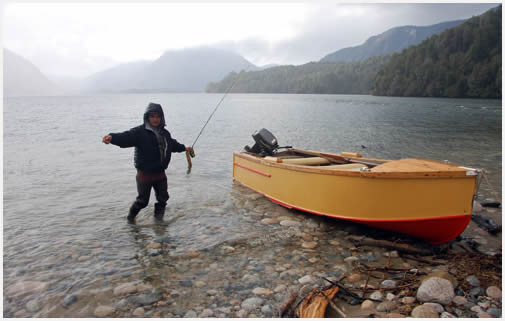 As we arrived in La Junta, we intended to spend some vacation days and to enjoy our hobby once again: fly-fishing. Therefore, the first thing we did was to check in at a mountain hotel located by the Southern Road and to devote ourselves to taking a rest.

While we were having dinner, we had a chat about fishing with some tourists who were staying at the hotel. They introduced us to a specialized guide to go on our first outing the following day. He taught us about the salmon and trout caught at Lake Rosselot.

After a hearty and well-served breakfast, we continued preparing the basic equipment, we bought a fishing license and Pedro Osés, our guide, picked us up to set out. The group was overcome by enthusiasm. 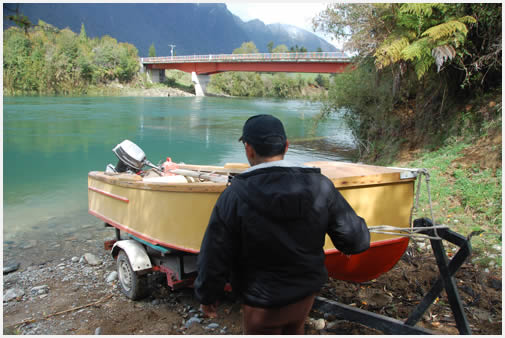 We headed towards our destination on a truck which pulled the outboard motor boat. The lake lay 8 kilometers away. We found a path for the boat to be placed on the water at the joint of the Rosselot River and the lake bearing the same name.

During the journey, we were fully aware that fly-fishing is the most subtle method to capture fish and the number of fly-fishing enthusiasts increases day after day. Pedro gave us a fly rod, because we had a spinning rod. 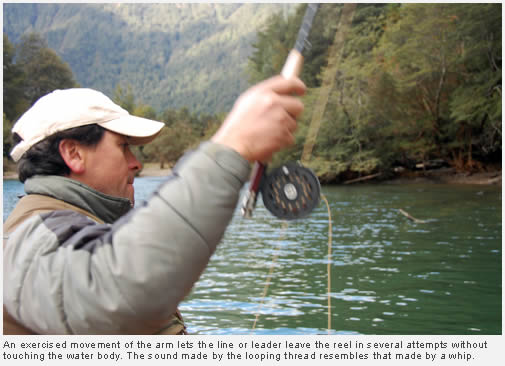 We got on the boat, put on our life preservers and Pedro started the engine by pulling the rope. A short and sharp sound and a slight jolt announced the departure.

Lake Rosselot appeared soon afterwards. It is narrow but large. Pedro, nicknamed Pello, stopped the engine and invited us to get our gear ready.

Taking the rod out from its package, unfolding it and choosing the appropriate flies is a real ritual not to be missed. Each angler has a particular way to carry out this ceremony in silence in order to concentrate on his movements.

We saw several boxes containing multicolor flies. A Wooly Bugger fly resembling a nymph and a Chernobyl ant were the first choices.

Small waves broke softly against the still boat. We all remained respectfully silent and the rods began doing their job on the water.


Whistling above Our Heads 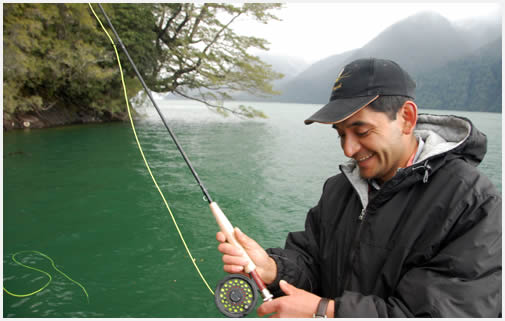 An exercised movement of the arm lets the line or leader leave the reel in several attempts without touching the water body. The sound made by the looping thread resembles that made by a whip. Finally, when the desired length is managed, the fly lands on the water very gently.

We changed the fishing location several times and the morning came to an end before we could even notice. The midday heat and the appetite we already felt made us think about lunch.

After a short rest, we headed towards the exit from the Figueroa River, where there were small sandy, rocky islands and some very interesting flumes. Pello told us that that was an emblematic spot in this place, together with the Palena River, the Negra Lagoon and the Gaucho Lake.

We caught two specimens of trout: one fario (or brown) and one rainbow trout. Living up to our status of anglers, none of the specimens was sacrificed. We unhooked them without touching their gills and, in a matter of seconds, we placed them back under the surface. The trout recovered their breath and flapped their fins until they could swim again.

It is possible to spend an excellent day out fishing without taking one single specimen. The previous preparations, the excitement of holding the trout in the hook and getting them out of the water were more than enough as a reward for the good angler. It was a complete satisfaction to release them back into their habitat and to let them survive. 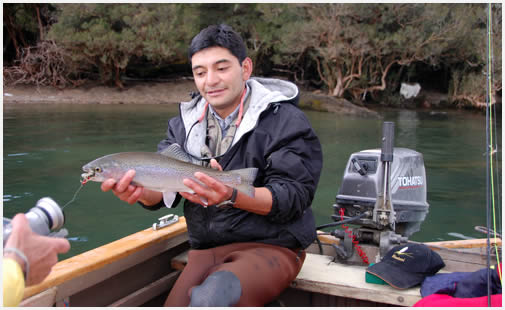 We felt lucky to have sailed the Rosselot in good company. We praised its natural resources and learned various secrets about fishing taught by Pello which we would surely put into practice in our future outings.

The outfitters provide boats and life preservers.
It is required to get a fishing license and be aware of pertinent regulations. These are provided by the Municipality and some authorized offices.
Category: Chilean citizens or foreigners.

« Back to La Junta