Expert on Asado at Lago Verde

We promised to put into practice the technique of roasting an entire animal with patience and some secrets passed on by a good asador. 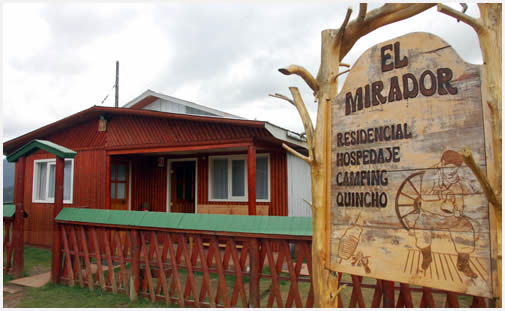 Certain people turn the task of roasting a heifer or a lamb into a ceremony. We had the chance to enjoy an excellent asado made by somebody who pays close attention to every detail.

Sergio Balboa is a well-known neighbor in Lago Verde. A countryside man, he has lived in this town for many years and has witnessed the beginnings of this rural settlement and seen it develop into what it is today.

As a good host, he invited us to share asado at his new quincho. We went there at the time arranged. A sign read Churrasco Quemado at the entrance of the venue where he usually meets his friends.

Don Checho, as everyone calls him, was next to a lamb set on the open fire. He was slowly adding pebre to the lamb. Pebre is a typical Chilean dressing, similar to the Argentinian chimichurri, that gives grilled meat an excellent taste and prevents it from drying.

We suggested his telling us about the process step by step and he shared his expertise with us. He told us how to prepare the meat and the fire, with all the patience we could gather to accompany the cooking process.

He said it was essential to have a young animal which had been fed with good pastures. Once slaughtered, it should be left in the open air for a few hours and its ribs marked by grasping it tightly to an iron cross.

The choice of the wood is also of extreme importance: it has to be dry and hard for the heat to be intense. Fire must turn into charcoal before it is put under the cross, which must be stuck in the ground in a slant position.

The cross must be placed as near the charcoal as necessary so that the heat begins to cook the meat; the ribs are cooked first. Cooking must not be hurried and the flame should not fade, don Checho added. 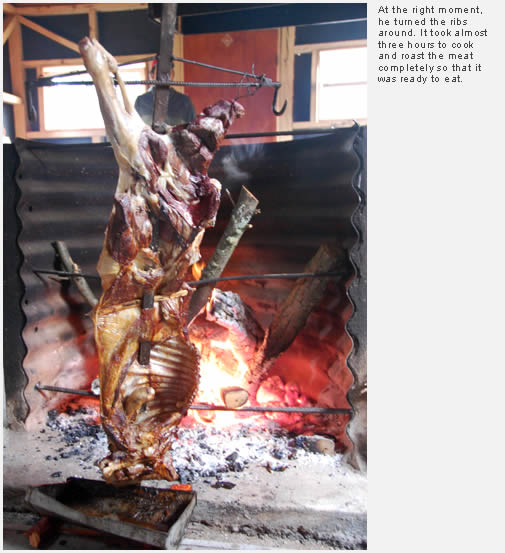 As we were having that conversation, somebody contributed a wine skin. Few members of the ceremony dared to aim the reddish spurt straight to the throat. Don Checho and other three men showed off.

While he referred to the way of roasting the meat, he continued moving the charcoals nearer the bottom of the cross without disregarding the secondary fire. At the right moment, he turned the ribs around. It took almost three hours to cook and roast the meat completely so that it was ready to eat.

Guests arrived and the informal chatting continued as don Checho entertained us with stories of his town which turned out to be quite interesting.

We asked about other local specialties and he answered: heifer head grilled under the soil. He told us it is wrapped up in a wet burlap cloth on hot rocks.

Very slowly, the asado reached its point and don Checho and his wife invited us to come close to the open fire. Several secrets had already been spread. Others, maybe, were left unsaid. 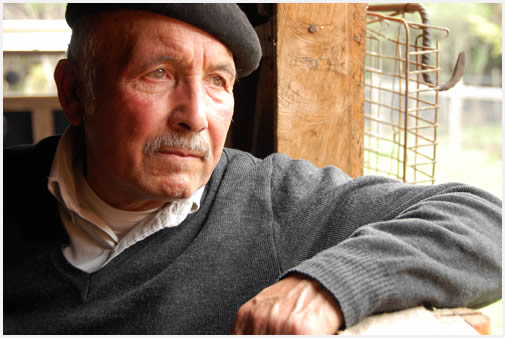 Following a typical custom in the countryside, don Checho invited us to approach the fire and he offered his own knife to the main guest and encouraged him to cut the first piece of meat. A sign of courtesy of the host and a tradition in the area.

« Back to Outings in Lago Verde