San Pedro de Atacama is an oasis. A small but coquettish city represents the main entrance to the driest desert on Earth. 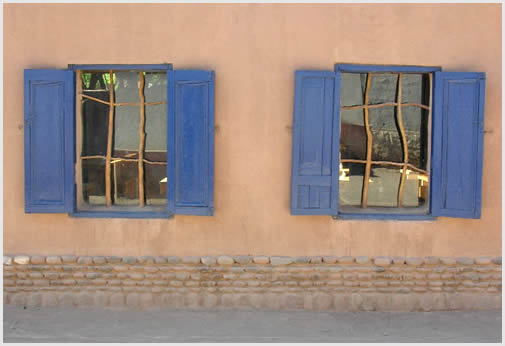 The feeling the visitor gets from walking down its streets is hard to describe. Everything is brown: from the hostels and restaurants to the travel agencies where tourists choose their excursions everyday. There they make up their minds to visit the Tatio Geysers, the Valley of the Moon or climb some of the large volcanoes that put the city in the shade.

An adobe kind of brown has tinged everything around. The only facilities that have not copied this kind of trend are the historical church, the town hall building and the main square. All the rest is brownish. Wonderfully brownish.

It is considered the archeological capital of Chile. The deserts around it, just like its salt deposits and the primitive peoples which are preserved untouched till this date, have turned it into a destination preferred by archeological and anthropological tourism. 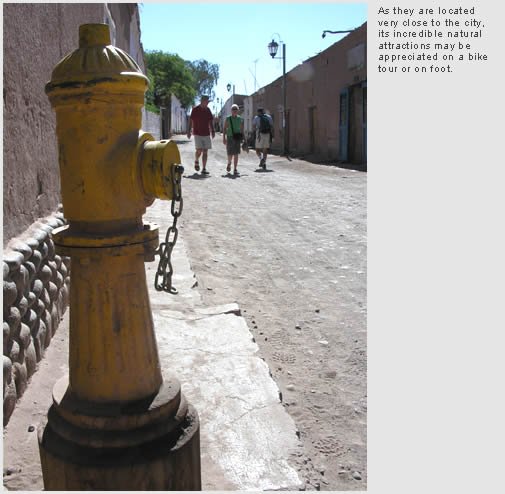 From the Pucará to the Moon

Pucarás like the ones at Quitor and Catarpe let us travel back in time and find vestiges of the Atacameño people, which has dwelled the region since over 10 thousand years ago. Today, these communities have been integrated to the local tourist development. They may be appreciated on a bike tour or on foot, as they are located very close to the city.

The Valley of the Moon and the Valley of Death are a clear sample of the development of these communities. The former was declared sanctuary of nature and is known for its morphological aspect by every tourist reaching San Pedro. On nights of full moon, crowds attend the natural show.

The Valley of Death is a large dune, ideal to practice adventure sports such as paragliding and sandboarding. Hiking tours to these fine sands leave everyday. 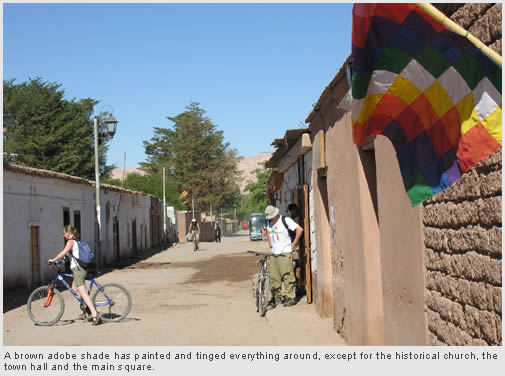 The City of San Pedro de Atacama is small, but it is its minimal essence that makes it unforgettable. Historical buildings such as its church or its main square or the crowded Caracoles Street make us feel as if we were inside a story by García Marquez. Here, magical realism is breathed at every minute.

Everything happens in cycles. There is a certain speed every morning before the tourists get on some of the excursion shuttles, but quietness rules in the afternoon, when it is time for siesta, or at sunset.

Before the sun goes down, everybody stays watching it at the Valley of the Moon. When the night falls, Caracoles Street becomes busy again until midnight. At that time, just like Cinderella, everyone must go home to bed according to town regulations. 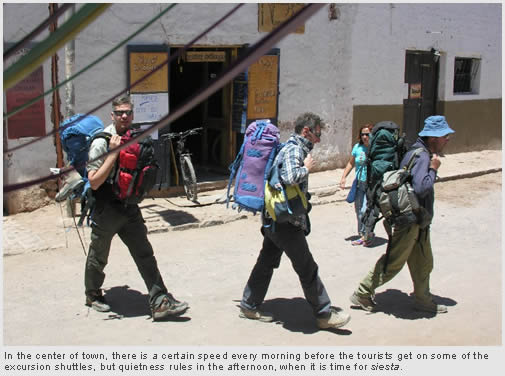 The bars, pubs and hostels slowly begin to turn off their sounds and voices and only some tourists wander about the beautiful peaceful streets.

Most visitors have already gone to bed leaving small San Pedro as desert as the desert around it. Excursions must leave early the following morning. 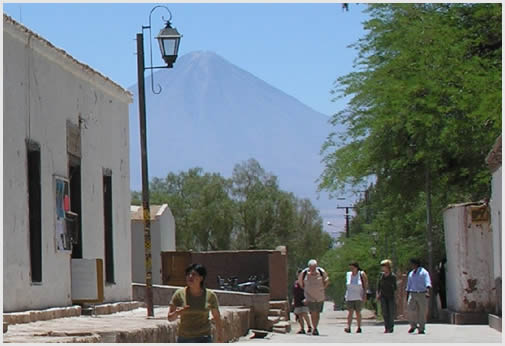 Lying almost 1,700 kilometers from Santiago, San Pedro de Atacama is one of the most popular tourist cities in Chile. A mystic and magical place chosen by youths, it has infinite things to show.