The Valley of the Moon

Visiting the Valley of the Moon is a must. Both during the day and at night, a unique and magical site unlike everything known. 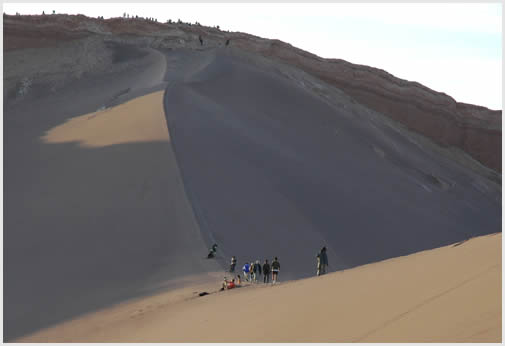 Leaving from San Pedro de Atacama, we took the road joining this city with Calama and, after having traveled for less than a kilometer, the Salt Mountain Range appeared before us to show a different kind of scenery. Huge clods of red, brown and gray soil would adopt all kinds of shapes thanks to the eternal action of the wind.

Before we could even notice, a small road on the left was inviting us into one of the most beautiful and amazing sites in Chile: the Valley of the Moon.

A native association formed by several local communities (Coyo, Larache, Quitor, Sequitor, Solor and San Pedro) is in charge of letting us into one of the best preserved and most exotic sanctuaries of nature in this region.

We were beginning to make out the various colors and shades on its surface, whose pigmentation always sprinkled in white immediately explains why such name was given to this place. 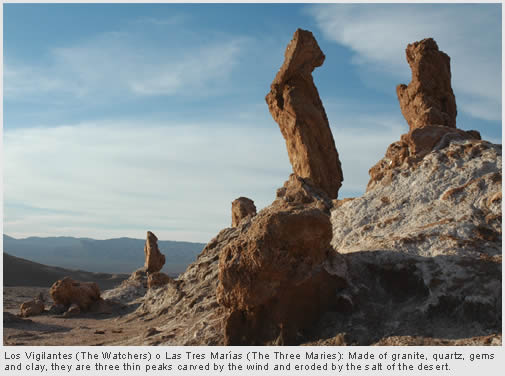 From Las Tres Marías to the Edge

The brochure we had been given at the entrance was perfectly useful for us to identify the various formations appearing before us as we got along.

Our attention was suddenly caught by the presence of an extense edge of sand which was being climbed by hundreds of people who had the very same aim: watch the sunset from there. It was still early, therefore, we resolved to move along up to a formation called Los Vigilantes (The Watchers) o Las Tres Marías (The Three Maries).

Made of granite, quartz, gems and clay, they are three thin peaks carved by the wind and eroded by the salt of the desert. It is said that they are over one million years old. 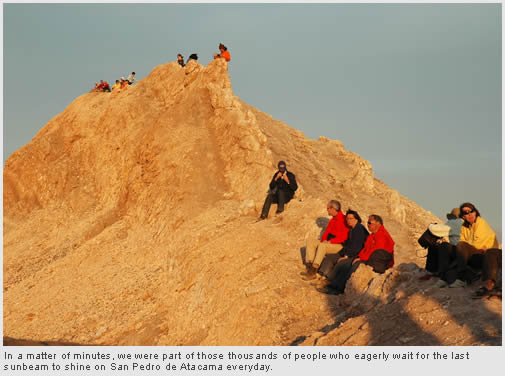 Following the same road, the amphitheater was another attraction to our eyes. Its colors and shapes surround a clear field that looks like the arena of a huge bull ring, but on the moon.
Our eyes had already seen enough. However, the best was still to come. Minutes passed as if they were seconds and the sun began to set slowly. The Licancabur Volcano would watch the same show it had watched for millions of years.

In a matter of minutes, we were part of those thousands of people who eagerly wait for the last sunbeam to shine on San Pedro de Atacama everyday. 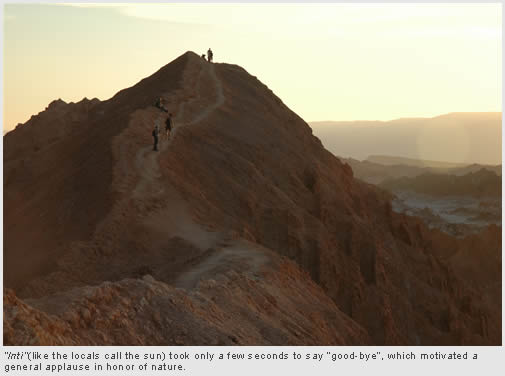 Dozens of viewers would walk along the sand edges in search for the perfect location as their cameras would wait to get record of the moment.

Inti (like the locals call the sun) took only a few seconds to say good-bye, which motivated a general applause in honor of nature. Where else does man applaud nature just for a fact of simple routine?

Maybe, the Atacameños were one of the peoples who have always applauded the sun in gratitude from time immemorial, both when it rises and when it sets. In spite of having been dominated by the Incas first and by the Spaniards afterwards, they still write their own history. 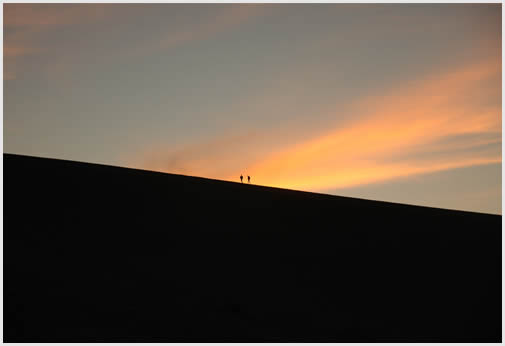 When there is a full moon, thousands and thousands of people from all over the world come to the Valley of the Moon. Fans of the moon and the sun, they gather here on such days. San Pedro de Atacama becomes magical and, of course, there is no room to swing a cat.

« Back to San Pedro de Atacama