The Valley of Death

Christened as the Valley of Death for its huge sand hills with narrow sand edges, this is one of the most recommended sites to practice hiking and sand-boarding. 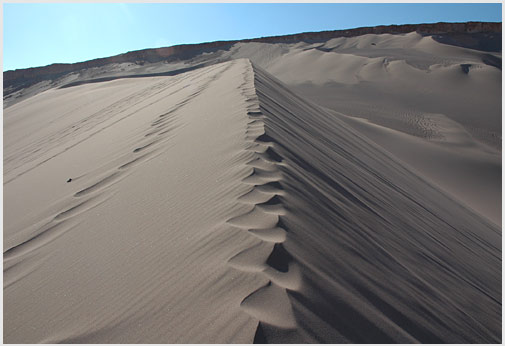 Only two kilometers separate it from San Pedro No sooner have we left the road than a sign indicates we are already at the place known as the Salt Mountain Range: a kind of lower range interrupted by some plains that will later turn into the majestic Andes Mountain Range towards the East.

We traveled along a great canyon formed by small mountains and clods that have acquired unbelievable shapes with the help of the wind and attract the view of visitors remarkably. 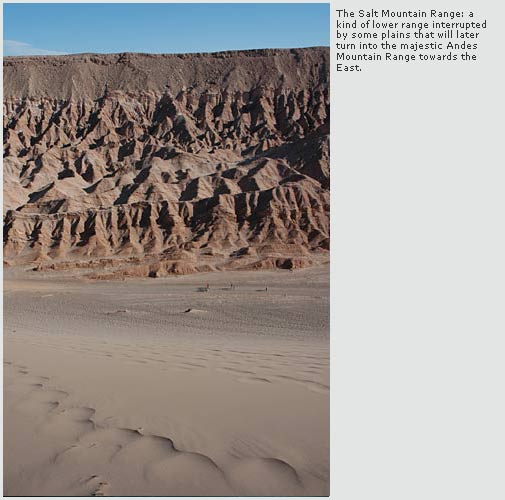 The road seems to become narrower and narrower until the wheels of the vehicle begin to lose traction and the soft sand takes control of the situation: it is time to get off and continue on foot.

"The Valley of Death", as it has come to be called, has lain there waiting for millions of years. We soon got our sand-boards from the vehicle and began to walk along with other tourists who, equipped with their photographic cameras, wished to portray one of the most interesting sites in the desert.

The curves to one side and the other left us in a huge sand deposit that began to raise slowly until our heads, now almost at 90 degrees, could fix the sight on the summit of that vast sand hill. 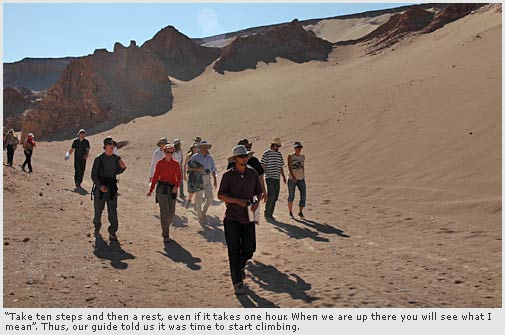 This is nothing. Fun is up there. Take ten steps and then a rest, even if it takes one hour. The important thing is to get there. When we are up there you will see what I mean. Thus, in a simple and categorical way, our guide told us it was time to start climbing.

And nobody, even if there were some elderly people in the tour, desisted from trying. Pedro was right. Every ten, fifteen or at least twenty steps, we were forced to stop, drink some water and rest.

We spent about 20 minutes like that, making jokes and telling anecdotes that came up to make climbing more pleasant and, of course, to extend each break. 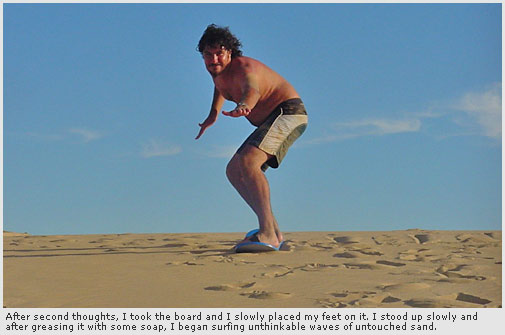 I will never forget the moment we got to the top. In a matter of seconds, the sand hill ended and a very thin thread unveiled an abrupt fall on the other side. It was not a cliff, but it forced us to remain on this side of the line.

It was then that the group held their breath and forming a perfect line sat down to watch the place from where we had left. Down there, there was another group that would soon start climbing. They would watch us with jealousy because we were already at the top.

But they did not know about the show the desert would perform for them. After second thoughts, I took the board and I slowly placed my feet on it. I stood up slowly and after greasing it with some soap, I began surfing unthinkable waves of untouched sand. As if I was in the sea... Or wasnt this place once covered by the sea? 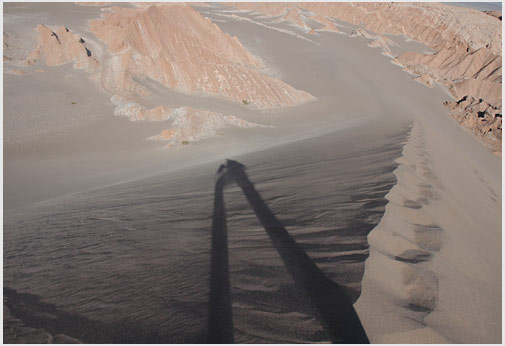 The Atacama desert has incredible sceneries that remind us of various movies like Lawrence of Arabia or any of the Indiana Jones films. Let yourself be carried away by your dreams. That is what San Pedro is about.