In San Pedro de Atacama, a bicycle is still the best vehicle to jump into adventure. It is a completely different thing on two wheels. 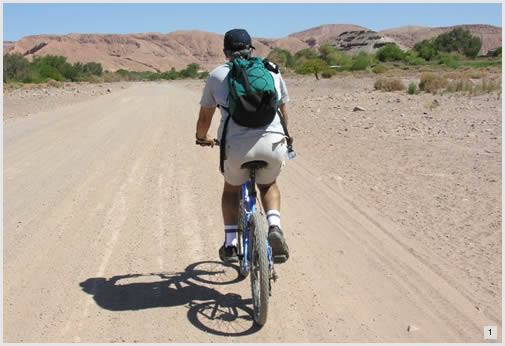 Caracoles Street is the center of attractions and activities of San Pedro de Atacama. Most of the travel agencies of this picturesque city are located on this street, which does not occupy more than 5 blocks.

It is impossible to estimate the number of people walking along it. But besides the presence of men, there is the same amount of bicycles. There are bicycles of all sizes and models. And although they do not have a life of their own, they spend the whole day in groups of 20 or 30 waiting for tourists to pick them up to start one of the typical tours around the area.

In our case, we rented two bicycles for the day and, after buying some fruit, cold cuts and cold water at the grocery store, we started pedaling to the different places of the city which can be reached on bike. 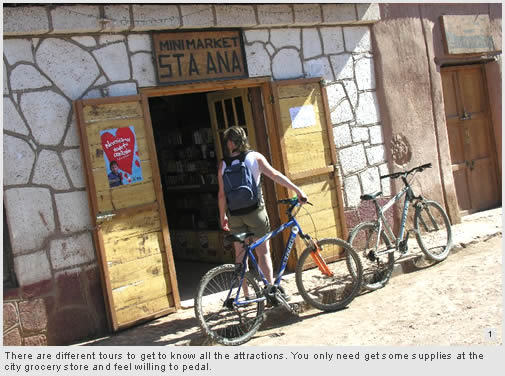 What is amazing is that there are attractive spots to the four cardinal points. In our case, we chose to tour the city and go out of it through an area which everybody talks about but only a few can pronounce correctly: the famous walls of San Pedro.


From San Pedro to Pucará

It is about a beautiful street surrounded by two thick adobe walls on both its sides, which identify the properties with their various shapes and designs.

Once we got to the end of the street, we decided to go back to town where the main square, the church and the City Hall would witness our executive lunch. A group of carabineros (the Chilean police) was tempted to taste our avocado salad and fresh peaches.

The idea was to recover our energy to get close to Pucará de Quitor, 3 kilometers northwards which is the goal of most of the tourists who become experienced cyclists for a few hours. 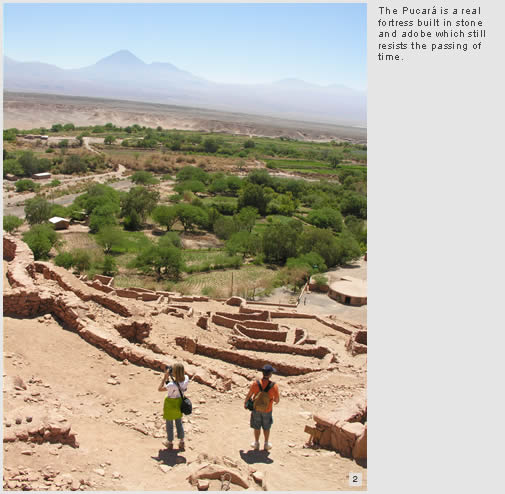 After pedaling 20 minutes and crossing some almost dry streams, we got to the entrance of Pucará. Its beauty, like its strategic location, immediately became evident in the faces of visitors.

In the Name of the Ckóntor

Up there, together with some condors, (word of Atacama origin, it is pronounced Ckóntor), lies a real fortress built of adobe and stone that still resists the passing of time.

Very little remained after the arrival of the Spaniards, who even entertained themselves by killing those big birds with their bayonets. According to the legend, the condors attacked in groups plunging one after the other over the Spanish invaders.

On our way back, we noticed there was someone who had been watching our tour: the giant Licancabur Volcano. 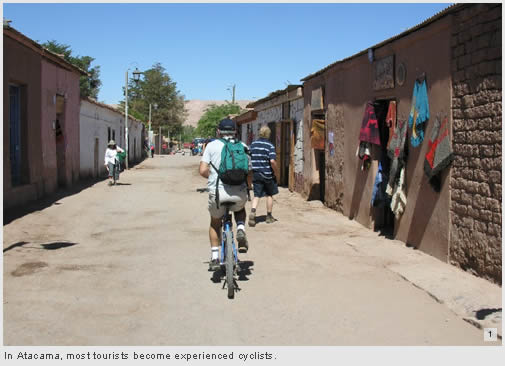 The way back to the city was magical, although we could not stop thinking about the days on which the Atacama people dominated the land.

Caracoles Street was almost empty: a sign that tourists and shops were having a rest after lunch.

We took back the bicycles and walked to the hotel, but nothing was the same. Rhythm and emotion were gone; speed is the right word to explain our lack. Undoubtedly, by bicycle is a completely different thing. 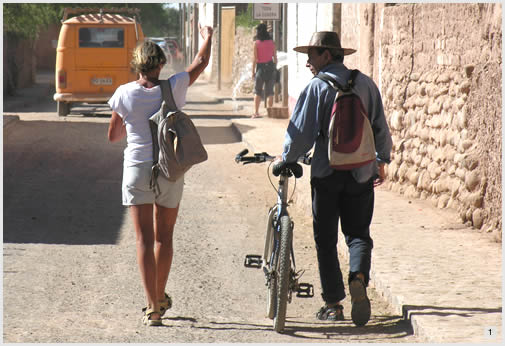 In San Pedro de Atacama, any direction we take will lead us to real gardens for the human sight. By bike, it is possible to reach the Valley of the Moon and the Valley of Death, , the refreshing Pozo 3 (a little water oasis) and Tulor Village. All of them lie less than 5 kilometers from town. For longer trips, it is advisable to use motorized vehicles.