A great diversity of birds makes a stop at Caulín Bay during their migratory flights turning this place into a real ecologic sanctuary. 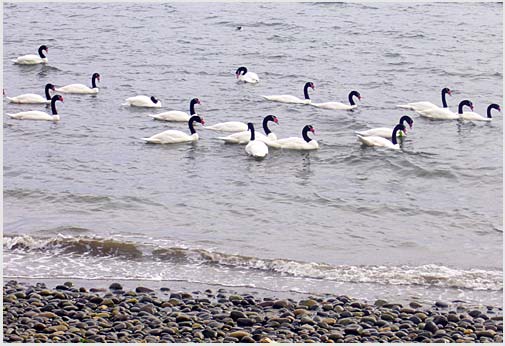 Between the port of Chacao and the City of Ancud lies Caulín Bay, a singular spot on the Eastern coast of Chiloé Island, dwelling of a great variety of birds.

The beautiful beach becomes larger when the tide is low and it invites flamingoes, black-necked swans, herons and seagulls, to name a few birds, to make a stop and rest during their migratory route. Thus, the visitors that approach the bay may observe a natural show of colorful beauty.

Every year, in various seasons, more than 60 sea species populate Caulín. The most outstanding birds include black-necked swans, which reach a population of 1,500 specimens in the summer, and the pink flamingoes, with thousands of specimens in the fall and the winter. There are also zarapitos (small birds of the Scolopacidae family), ralladores (or rayador, birds who fish on their flight, from the Rynchopinae family), and several kinds of ducks, herons and seagulls that fly continuously over the shore. 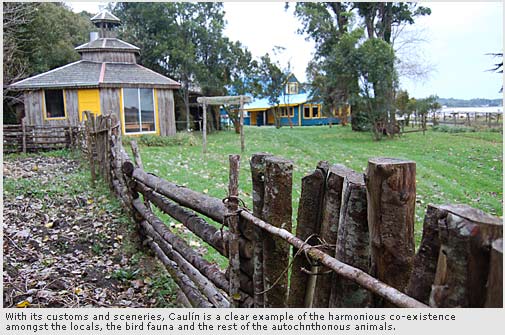 In these surroundings, the dwellers of the quiet community of Caulín carry out their agricultural and fishing activities making good use of the natural resources and establishing a direct relationship with their environment. Therefore, this place was declared a Bird Sanctuary, a designation celebrated with a festival every January.

In turn, the rescue of cultural traditions has enabled the town of Caulín to show visitors the handicrafts representing the Huiliche culture, as well as regional festivals such as la mariscada (a seafood festival). This event is celebrated when the sea recedes almost one kilometer and the beach is sown with seafood the villagers pick up to produce their typical dishes, such as curanto. 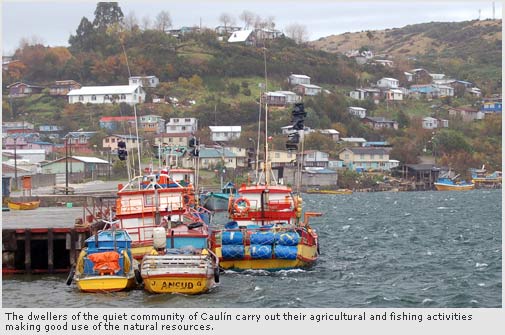 Thus, with its customs and sceneries, Caulín is a clear example of the harmonious co-existence amongst the locals, the bird fauna and the rest of the autochnthonous animals.

Leave Ancud following Route 5 towards Port Chacao, take the first detour and travel along 4 km up to Caulín.

The seaside restaurants offer an exclusive delicacy: Caulíns cultured oysters. You should not leave this picturesque village without tasting this delicious typically regional dish.