We toured around the urban area in one of the most booming cities in Southern Chile, entrance gate to the Lake District. 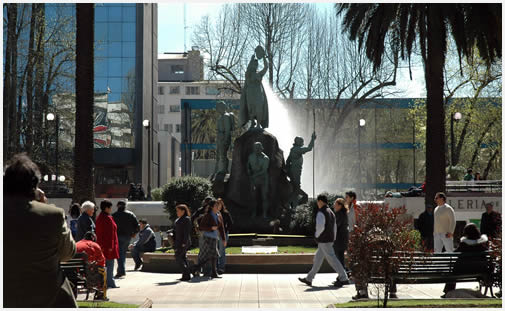 Under the protection of Mounts Ñielol and Conun Huenu, the City of Temuco grows steadily in Southern Chile. It has a past rich in history and culture and a present with a significant economic activity.

To begin our tour, we laid out a circuit around the main urban sites leaving from the center. The main square is called Aníbal Pinto and it features a neat landscaped area with ancient native trees and gardens that break with the monochromatic nearby buildings. The Monument to Araucanía, a fountain with sculptures made by local artists and representing the encounter between the Mapuches and the colonists, stands in it. In addition to beholding its modern design, visitors may also appreciate exhibitions in its art gallery and various cultural events presented in its amphitheater and stages.

The main commercial arteries converge into this square surrounded by important city buildings. One of them is the church cathedral, which displays an exquisite inner aisle, the mayors building, the town hall and large shopping malls, as well as several cafés and coffee-shops. 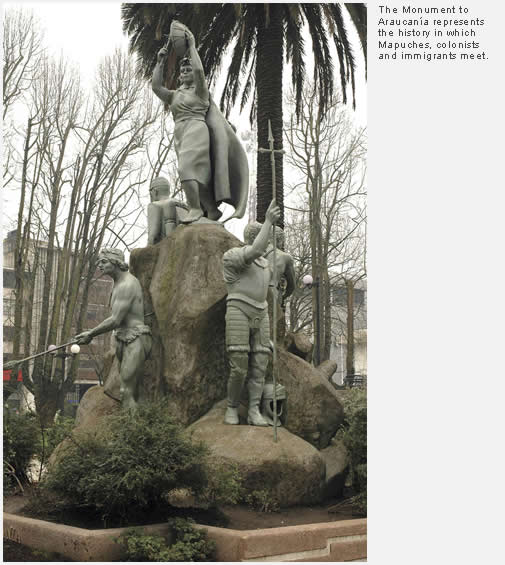 Far from the Square

Two blocks from the Aníbal Pinto square, along Bulnes Street and up to Portales Street, visitors can reach the well-known Municipal Market, a traditional commercial point where they can purchase handicrafts and eat typical dishes.

Another place to get regional products is the Aníbal Pinto Market, which lies in an area of the railway station, on Manuel Rodríguez Street, in the old part of Temuco.

The Municipal Theater, cultural reference in the South of the country, lies on Pablo Neruda Avenue. Having a modern infrastructure and 1,200 seats, the theater of Temuco presents local, national and international shows with prestigious programs that include plays, classic ballet, contemporary dance, opera, jazz and piano concerts, to name a few artistic expressions.

Leaving the city along Mackena Street towards the Cautín River, after crossing the old road bridge and bordering the river, a place called Padre Las Casas is reached. In its origins, this small village used to lodge the Capuchin missions that settled down in the area and at present it congregates the Mapuche communities that live on handicrafts and agriculture.

As it may be appreciated, in spite of its quick urban development, the city maintains the stamp of its history, built by the criollos and immigrants that inhabited it from the beginning. As a result of the effort made by its settlers, Temuco has become not only the entrance gate to the Lake District, but also the main center of services in Southern Chile. 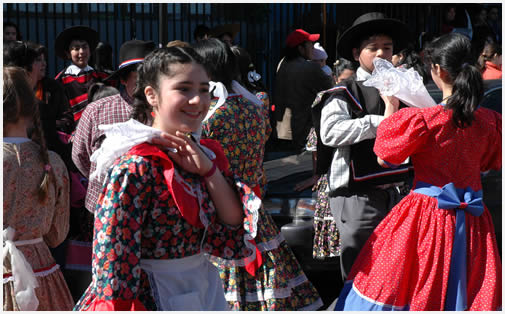 Far from the center lies the Railway Museum, with its famous engine room.