We took the chair lifts used by skiers in winter during the first part of the outing and comfortably rode horses during the rest of the circuit. 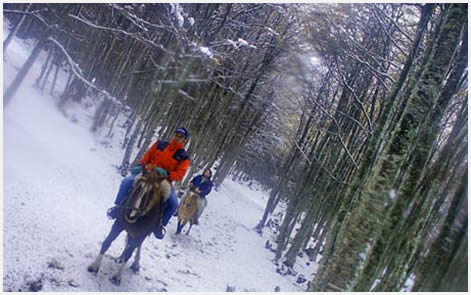 Visitors can ride on horseback almost all the year round in Punta Arenas and, if it happens to snow on the day of the outing, as winter might come early, the adventure becomes even more intense.

It was a freezing cold, white morning after a light but persistent snowfall during the night; after checking with the agency that the outing to Mount Fenton was on schedule, we headed to the meeting point. We wore parkas, woolen caps, gaiters and gloves to combat the temperature but actually, nothing would deter our eagerness to go riding.

A 4 wheel drive truck picked us up at the hotel to drive 8 kilometers to Club Andino, the winter resort in Magallanes Forest Reserve. 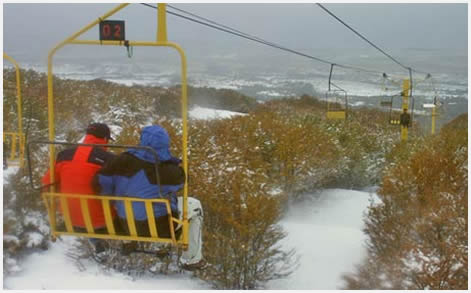 When we reached the ski tracks, we took the chairlift to the summit not to miss the spectacular view. Only a few lenga beeches with their last reddish leaves stood out in a completely white landscape, and way beyond the dark blue sea completed the picture. From the top, we not only saw the city but the Strait of Magellan, Tierra del Fuego Island and a part of Brunswick Peninsula as well.

During the ski season, Club Andino rents equipment and provides instruction at their school for both children and adults. 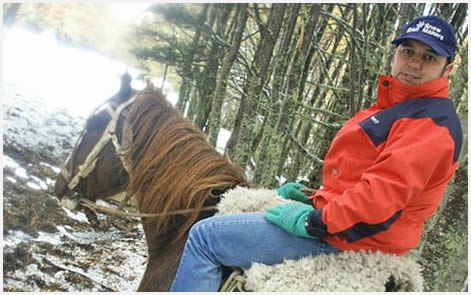 We left the chair lift and went towards the horses. When the whole group had mounted, our ride began. We soon entered a thick lenga and Antarctic beech forest. These high-Andean species were not very tall: their trunk slim and their leaves, at the top of the plant, seemed to be looking for light.

Our guide had saddled the horses with the typical recado and wide girth of this southernmost land and led the way. It was an easy, safe ride and, the deeper the snow got, the more elated we felt at being alone in such a vast expanse of land. We crossed a bridge over frozen water and our guide explained that the rocks protruding on the surface belong to the Loreto formation and are almost horizontal strata of sediments of the Tertiary Period, approximately 25,000 years old. 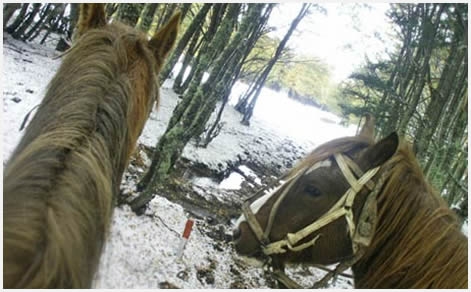 When the snowfall, though light, began to feel uncomfortable on our faces we decided to return. It was getting really cold when we retraced our steps and clearly saw the hoof prints in the snow, protected by the forest.

We have fond memories of our ride up Mount Fenton and the wonderful view. We really enjoyed learning about the area and its people and of course, we will always cherish making friends among the locals.

In order to reach the Punta Arenas Club Andino, travel 8 km from the center of the city towards the West. The road is very well signposted, which enables an easy access to the place.

To be arranged with the tourist agency. In general, horseback excursions leave at 10am, 2pm and 5pm.

It is an ideal outing for beginners. Visitors who enjoy riding will find two and three day outings available. We also recommend snowshoeing.