Visitors may spend a whole day surrounded by the enigmatic geographical features of a glacier while beholding its structure and walking on that large icy mass.

The tour to Grey Glacier starts at the City of Puerto Natales. This is one of the many adventures offered by the Southern Patagonian Ice Field, immersed within the territory of Torres del Paine National Park.

Feeling totally convinced of experiencing this exploit, we set out at five in the morning along National Route 9 towards the national park. We were still sleepy when we saw the sun rise tinging the scene of lengas and ñires around us. We said hello to the Paine Massif, boasting its reddish hues and its sharp peaks and horns, typical of this granite colossus. 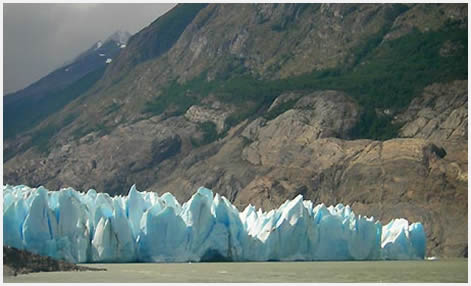 We arrived in Lake Grey Inn, on the shores of the lake bearing the same name at eight in the morning. We got on board the Grey II and made ourselves comfortable inside the cabin, as it was an extremely cold day. We set sail and observed ice floes moving adrift amid the crystals. We had longed for this voyage for a long time.

For an hour, we moved across the lake towards the glacier just beholding the scene. When we finally reached the Greys wall, we got on a Zodiac MK-5 to access a moraine. We were impressed by the different shades of blue, the whimsical shapes of the natural ice mass and the vastness of this formation. 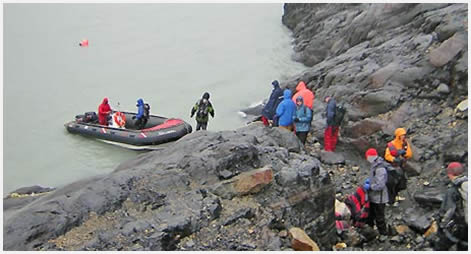 After we landed, we walked on the rocks towards a campsite, where the guides provided us a harness, long ice axes (to march) and short ice axes (to climb), a helmet, rigid boots and crampons.


Over the Translucent Ground

The first stretch over the western arm of the deeply blue glacier was simple and got us ready for the next ones. Little by little, we succeeded in conquering that unknown world. We raised our feet as we walked, lowering our gravity center and leaving a broad footprint on the ground. 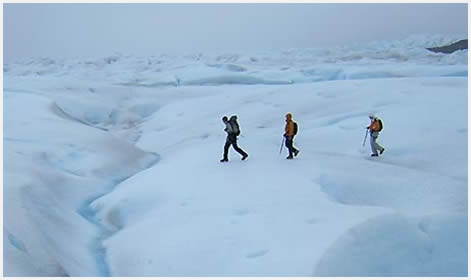 We walked in a single file following the guides and watching our step. We made a technical stop to rest and become aware of how long we had already walked. We took out some clothes as we had warmed up. As we looked around, we understood that that icy space was immense and we were tiny on them.

We identified caves and drains and stood at the base of the serac, blocks of glacier ice. We stopped before the spectacular lake in the middle of that white wasteland. We picked up some water in a jar and drank it. We felt we had never tasted such a delicious and natural substance. We were amazed to hear that one of the cracks was seventy meters deep and that scientists from National Geographic had dived into it. 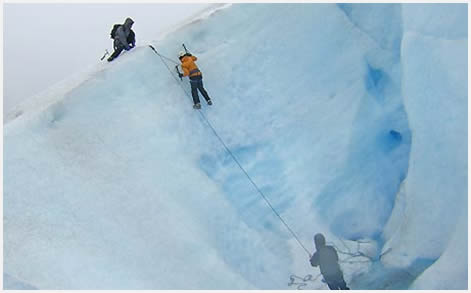 Before climbing, we had lunch on the frozen ground to recover our energy. The banquet was made up by hot cream soup and a chocolate bar. In the meantime, the guides settled up a system of ropes and screws on the edge of the area we were going to climb. Once they had explained to us how to move, we made our attempts. It was amusing and possible because the experts were there to help us.

We went back to the base campsite, where we found the Zodiac that would take us back to the shelter. We had one last look at that ancient icy massif that surpassed everything around it. 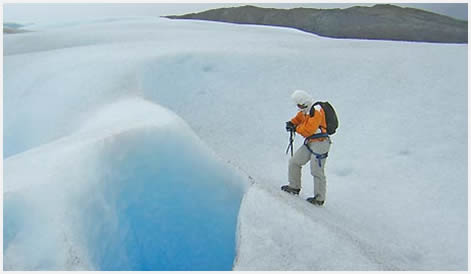 Back on board the Grey II, we reviewed the adventure we had just experienced. We found hard it to believe our own capacity to sort out obstacles. However, we knew we had succeeded. A toast with pisco sour with ice from the glacier was the perfect finale for a memorable day.

Travel agencies offer all the necessary gear to go on this excursion and they pick up tourists at their lodging. The tour starts at 5am is back in town at 4pm.
Another option is to reach the pier on our own vehicle.

This kind of tour is appropriate for anyone from 13 to 70. Physical fitness is essential. Expedition members must wear hiking boots, comfortable waterproof warm clothes, gloves, UV sunglasses and sunscreen.