It houses a fishermen settlement and features a different perspective of the city and the Relancovi Inlet from its shores. 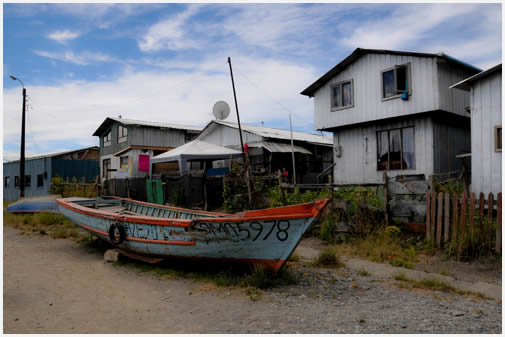 In order to see what Tenglo Island had to offer, we resolved to cross the narrow channel that separates it from Puerto Montt's urban life and see it from the inside to unveil its secrets.

Just next to the access to the market of Angelmó, there is a berth where boat services are available to take visitors down to the island. We got on board one of the old typical wooden rowing boats and shared it with the locals. As we got slowly away from the coast, we got ready to behold the typical restaurants built on stilts, the ocean drive and the port as a whole picture.

Eight minutes later, we were welcomed by an old wooden building formerly housing the hotel and restaurant owned by the Hoffmann family on the opposite shore. This venue became famous as a result of its curantos de hoyo, made with a recipe from Chiloé. 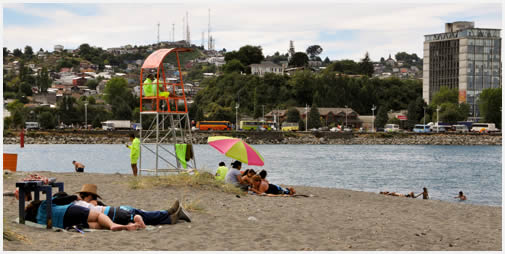 Strolling down the coastline up to the place known as La Puntilla, we discovered the wild nature of the island and soon reached the ample beach of volcanic sand where people were already sunbathing and there was even a lifeguard. We sat down on the sand to behold the ample scene and count each of the buildings and attractions we could identify in the city.

The islanders are fishermen who made up a neighborhood of simple housing units and have a tiny port that shelters their colorful boats. It was when we paid attention to the names these boats had been given that we learned about a popular legend in southern Chile. It is the legend of La Pincoya, a figure that represents a beautiful young woman wearing an algae outfit who is famous for discovering the areas where fishing is good. These hard seamen commend themselves to this entity. Several traditional festivals and that of the Virgin of Lourdes are shared with visitors who are familiar with local dates and customs.

We walked towards the southern margin, which prevented us from keeping on walking across its huge rocks forming a wall. However, we stopped to contemplate the open bay.

We returned to the trail that would lead us to the huge cross settled on the top of a small hill, which we had already observed because it was lit during the night. After climbing up a steep slope for about twenty minutes, our physical effort was rewarded with the most incredible panoramic sight. In the background, the Osorno, Puntiagudo and Calbuco Volcanoes boasted their beauty as the modern buildings occupied the foreground on the shore. We found other trails to go hiking and heard the amplified murmur of the hustle and bustle of the city.

The corollary of our visit to the island was the memory of that intense hike across a quiet environment with a rural nature. Likewise, the magic of a different point of view was revealing. 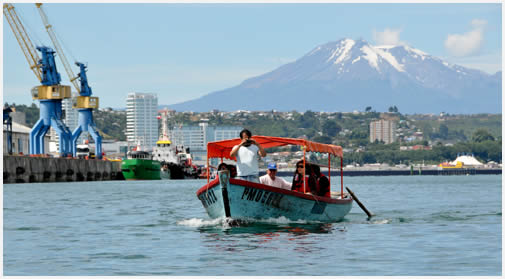 Information about adventure hikes and popular festival dates is provided at the tourist office.
This visit is done during the day.
There are no services available and it is necessary to carry supplies if visitors are planning to spend part of the day at this spot.