Making our Way around Puerto Ramírez

Reaching a viewpoint and hearing the sound of an incredibly beautiful cascade are two good reasons to put our energy into a walk along rocky trails in the woods. 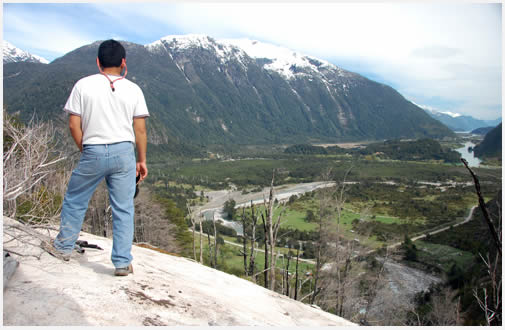 The steady population of Puerto Ramírez is small. However, tourist activities available -especially angling- are plentiful.

Once we settled down at this typical mountain village, a part of the family got on board a boat to enjoy the day on Lake Yelcho together with trout experts. The rest of us, including the kids, wished to go for a ride around the area. We talked to Baltasar and José, two local dwellers, and they offered to guide us on an easy mountain hike.

We gathered in front of the pier, next to the path leading to Carretera Austral and Futaleufú. Willing to set out, we followed our hosts. They told us we would have to climb a bit but we would be rewarded at the end of that effort. 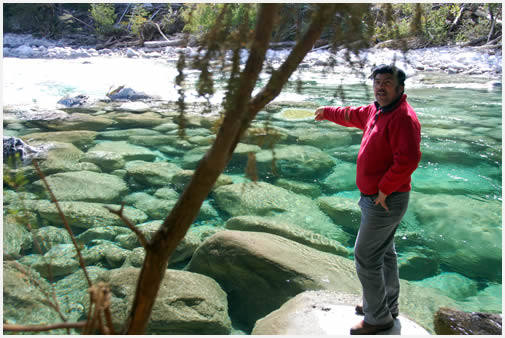 We slowly left the houses, the pets and the shady trees behind. The trail is made up by some bushes, fruit trees and rocky areas we could easily sort out. We perceived the powerful sound of a river running under those rocks. Still, we could not see it. As we chatted with the guides, we learned more about the local lifestyle of a village where tourism is part of the life of local denizens.

Farther ahead, the soil was wilder. We used cane sticks to make the most of our effort while walking. We came across a river in a clearing and made excellent pictures of the scene. On higher ground, we were welcomed by a large rock from where we could appreciate the hamlet that gives life to Puerto Ramírez, framed by very high mountains and winding rivers.

In the distance, two rivers which end in the lake showed off their glossy foam: the Futaleufú and the Enredaderas. The Yelcho has glacial origin. That is why it featured an emerald hue intensified in the sunlight.

We stayed there for a while and then descended without any haste along the same trail. We got past the pens where a couple of pigs and their offspring were sunbathing in that mild afternoon. 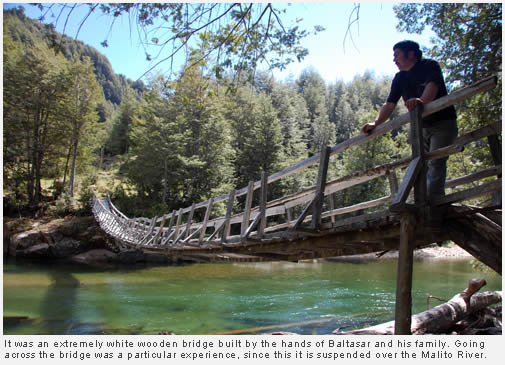 After celebrating the ritual of mate amargo poured unhurriedly, we started moving again, this time to go up to the cascade known as El Salto. We were driven to the wooden footbridge Baltasar and his family had built years before to cross the Malito River. We went over it on foot and, as we reached a rocky beach, we got deep into the woods uphill.

We were close to the cascade when we heard its strong murmur. It suddenly appeared before us amid the motley vegetation. El Salto has three main falls that empty their waters on some huge boulders after a long stretch. The sound was deafening. We remained there for a while, next to the pool where the largest volume ended up. We certainly enjoyed that natural wonder. 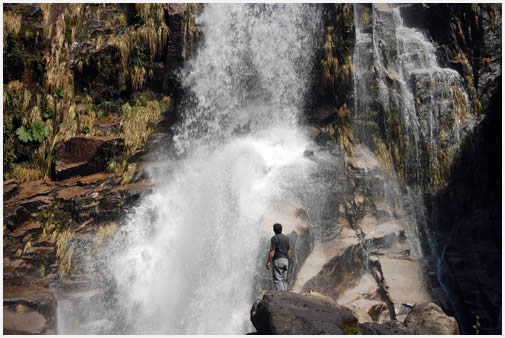 We went back to town and thanked Baltasar and José for their company during the hike and for everything we had experienced at that village that dedicates its effort to show visitors around its varied attractions.

Only accessed with the aid of a local. Trails are not marked.

« Back to Outings in Alto Palena