In the last few years, the inclusion of wooden sculptures in strategic locations such as the Sculptors' Park, a theme cultural milestone that highlights creative processes, has become more noticeable. 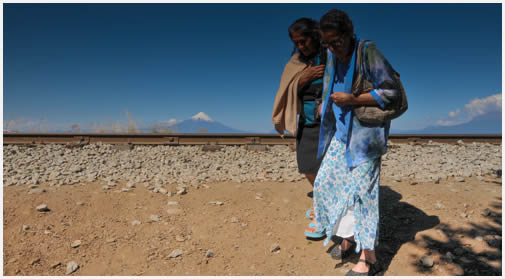 On the shores of vast Lake Llanquihue, the community bearing the same name gathers ancient customs inherited from German ancestors who reached the area in the mid-nineteenth century. This is a placid town without haste and its broad streets allow traffic to be relaxed and respectful of cyclists and pedestrians.

Baquedano Street is the axis of city life. Towards the north, it reaches the railway station and the fire station, old buildings formerly raised in the outskirts of town and now integrated to daily life.

Following the same path, we reached Club Gimnástico Alemán (German Gym Club), social, cultural and sports center of the community and the neighboring cities. As the pavement ends, the area known as Totoral (reed bed) and the classical monument to German colonists Unsern Ahnen appears. We spotted some bronze plates on a stone wall, where the surnames of the eighty immigrants who fell in love with the area in 1852 and resolved to settle down and change the physiognomy of this place for good have been inscribed. At this point, we caught one of the best glimpses of the Llanquihue, the second largest lake in Chile. 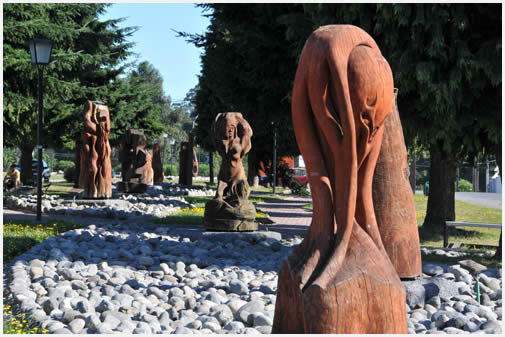 The traditional Beer Festival is held late in January every year. The famous week known as Semana Llanquihuana and the typical festivals are also celebrated in the summer and these three events gather the entire population in sports, recreation and musical activities for several days. During these joyful days, the popular roots of the region are recreated and many visitors are welcomed.

In order to learn more about the origin of the wooden sculptures scattered around the city, we talked to a local tourist guide: International sculptors encounters have been taking place for years. They have become more and more important as a result of the quality of artists attending these events. They turn native wood -including cypress- into art pieces using power saws, gravers and sand paper.

During our tour, we heard voices and observed sign posts with German surnames. Those roots also involve gastronomy, which features dishes consisting of cured meat, cheese and cold cuts as well as pastries. Ruta de la Cecina (the Cured Meat Road) is one of the typical rides for those who wish to learn about the production process of an important local slaughter house, including all the stages from breeding the animals to the distribution of the products in the food market.

When the weather is hot, the lake shores is the most attractive option to enjoy swimming and water sports.

We left the community, its soft hills, lake, river and a mass of polite people always willing to chat. However, all this remains in this written piece.

The distance between Llanquihue and Puerto Montt is 25 kilometers.

It is worthwhile spending the night in Llanquihue, either at some cabin or lodge, and going for a walk at night to watch the moon, the volcano and the huge lake. An incredible view is guaranteed.

« Back to Outings in Llanquihue