Every rodeo gathering is a festival where both riders and mounts show off while competing in the classic events to conquer a position in the championship. 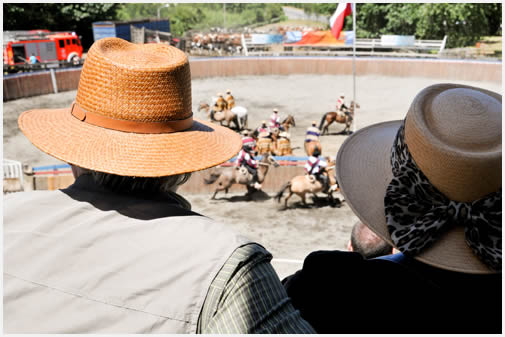 While walking around Frutillar, we came across its medialuna, a croissant-shaped venue devoted to rodeo practices. Open to visitors, it lets everyone learn and understand how this rural sport is developed.

Scored events are held in the summer as a preparation for the national championships. Nobody wants to miss them. We witnessed these instances in the facilities of the Rodeo Club in Frutillar, on Richter Street.

Once the gathering had started, we were welcomed by music and spokesmen who cheered up the afternoon while mentioning each of the participants who would be involved in each collera (team) and the names of their horses.

The audience cheered the performance of the participants with screams and gestures at the semi-circular stalls. The riders were making the arena quite dusty, turning it into an attractive sight completed with the Chilean flag and Lake Llanquihue in the background.

Then we got ready to understand what each event consisted in. They emulated the most praised task among Chilean people. As the bullock went out into the arena, both riders had to go around the first stretch of the medialuna -known as the apiñadero- twice, driving the animal. 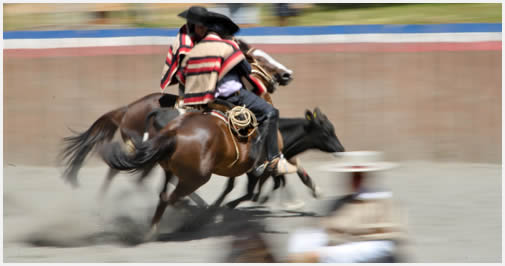 Afterwards, a huge gate opened into an ampler area, where the bullock had to be stopped within an authorized area through three atajadas or quinchadas. To do this, one of the riders stood perpendicularly to the animal and the other one before it, preventing it from advancing. This happened with the aid of spurs and a short rein.

Competitors concentrate their effort and their skill to attain a good score. They can be heard encouraging each other while doing their part of the job. All in all, every event offers a maximum of thirteen points, after adding and deducting points according to the performance of the men and the animals they are riding.

At the end of the afternoon, the jurors express their verdict and the winners are known. The scores must be presented before the great national rodeo, held every year in Rancagua, where the so called Champion is the maximum rodeo festival. Held for four days, it displays the best riders and mounts.

Cueca music and tunes were in the air, making the afternoon more enjoyable. We saw some stalls selling rural items, the coffee-shop and especially the area where the presentation of the horses ridden by the huasos is prepared. 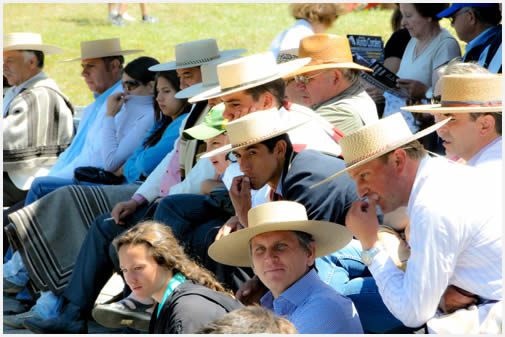 Beautiful Criollo horses -or corraleros- especially taken care of and trained for the demanding task, also have their own fight. The award known as Sello de Raza is granted to the animals that feature the best morphology, trait purity and good sport results.

We stopped to observe the neat and smart apparel worn by rodeo men. Wearing the classic broad-brimmed hats, their poncho-like capes and leather accessories, they show elegance and speak about their hunches, their favorite data and details they know about previous rodeo events.

We were just visiting. Nevertheless, we managed to understand the sense of this rural sport par excellence. And it was a great day for us too.

Print this outing
« Back to Outings in Frutillar