The artistic beauty of the Marble Chapels can only be the work of perfect nature which, in its comings and goings, results in moving sculpted erosion and landmarks. 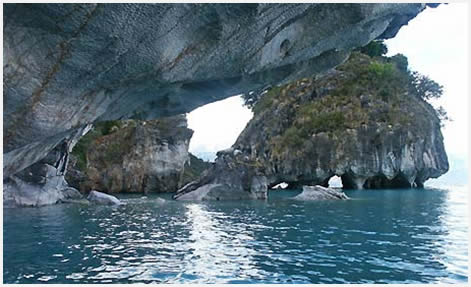 Río Tranquilo is a small port on the coast of Lake General Carrera, located between Chile Chico and Port Ingeniero Ibañez. It has recently become more popular due to the nearby rock formations in the lake: the Marble Chapels.

Curiosity made us drive from Coyhaique to see these wonders and allowed us to get to know other picturesque sites in southern Chile. When we reached Puerto Tranquilo, we contacted a local guide to take us to the islets in his motorboat. They are known as Catedral, Capilla and Cavernas de Mármol (Marble Cathedral, Chapel and Caves) because of their outward appearance. As a group, they are considered a Natural Sanctuary.

Though they are hidden from view from the coast, once reached every nook and cranny seem straight out of a story book. The entrance is on the surface of the water and the colors reflecting off its walls range from amazing, iridescent blues, grays and pinks to pure white. For thousands of years the water and the wind have battered the rock unveiling the marble and limestone components, calcium carbonate, quartz and limonite. 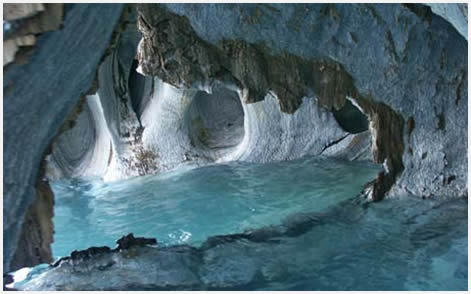 We were really reluctant to leave but aware that other passengers should have the same opportunity to witness these enchanting caves. Fortunately, we had photographed and videotaped our experience of this incredible site so it would never be lost.

We felt the slightly rough surface of the walls while the rise and fall of the water reflected its rainbow in the cave. An array of varied openings gave way to several galleries while the iridescence changed each time we exited or re-entered the caves with their spectacular turquoise hues. 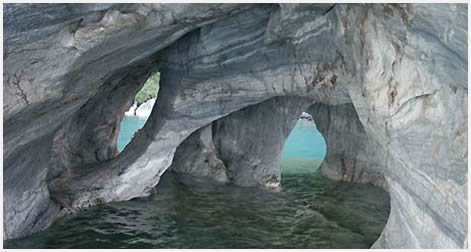 This outstanding outing is only possible during daylight hours and in good weather conditions. On windless days it is even reachable in kayaks.

Although the Marble Chapels can be reached from other points on the coast, Puerto Río Tranquilo is the nearest. Leaving the town behind, we retraced our steps to return to Coyhaique glad to have traveled the distance to these extraordinary, unforgettable rock structures. 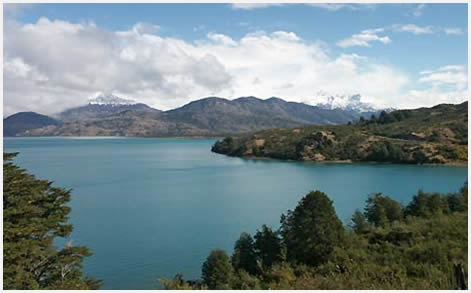 1 hour, according to weather conditions.

There are two options to reach Puerto Río Tranquilo from Coyhaique. You can either head towards Puerto Ingeniero Ibañez (118 kilometers), cross lake Carreras on the barge, arrive at Chile Chico two hours later and then drive to Puerto Tranquilo (166 kilometers) Or, you can take the Camino Austral out of Coyhaique and drive all the way (225 kilometers). The road is paved up to Cerro Castillo, half way there, and the rest of the way is a gravel road.

daily outings until 6pm during the season.

There are hotels and restaurants in Puerto Río Tranquilo