Told by its Owners

Known as the archaeological capital of Chile, San Pedro de Atacama is surrounded by communities which have preserved their anthropological and archaeological richness. 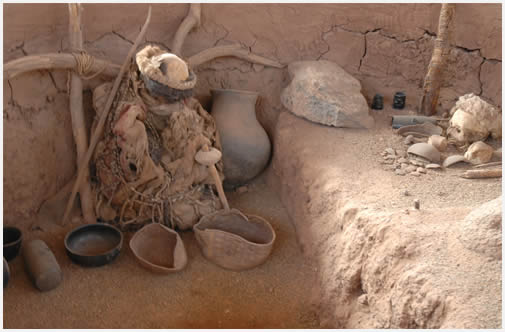 Inside the city, particularly opposite the main square of San Pedro, there is a historical site from where tourists should begin any of the archaeological tours departing from the city, the Father Le Paige Archaeological Museum.

This museum carries the name of a Jesuit, who in 1950 began to serve as a priest in the local chapel. Despite his pastoral life, he also played an important part in the collection of objects and the study of surrounding ancestral native towns. As a result of this exchange, he found and gathered numerous artifacts belonging to different ancestral communities. Years later, he received support from organizations and institutions which decided to create the museum and to be in charge of its management and preservation. We were recommended to visit three main tourist attractions so as to manage a better understanding of what the life of the Atacama natives used to be like. 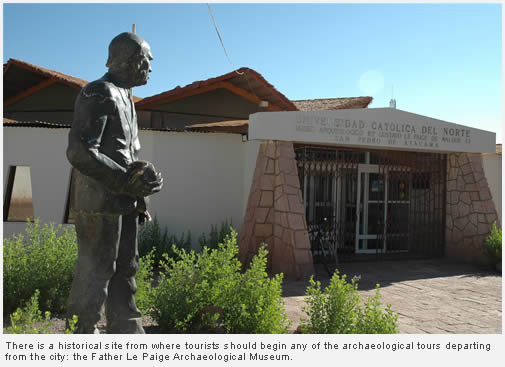 Tell me what you know

Pucara Quitor, situated only 3 kilometers from the city, is one of the ideal locations to regain consciousness of the dimension of the cultural heritage of these ancestral communities.

This place was built at the base of a leaning mountain which is part of the beautiful Cordillera de la Sal (Salt Mountain Range). Next to it, the ancient San Pedro River runs and the presence of water makes it a true oasis. Nowadays, you only have to walk up and wander into the town amongst its streets and buildings to enjoy the panoramic view of the region that the Atacama natives would have in those days.

Retaining walls were used as special construction techniques for the building of houses. Inside the buildings, domestic spaces certainly served as rooms or inner apartments and other spaces were shared by those who lived there, like squares and farmyards. 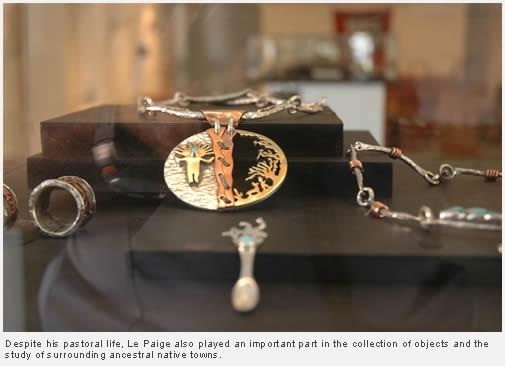 Pucará Quitor was occupied by the Inca Empire and afterwards left to its fate until the year 1540 when the Spaniard conquerors attacked them with horses and weapons as any Pucara inhabitants had never seen before.

A little bit farther away, there is the Inca administrative center of Catarpe, where it is possible to find a Pre-Inca Atacama settlement. This site is visited by hundreds of tourists surprised at the amazing state of preservation of these 200 structures which were built only in stone and adobe centuries ago. 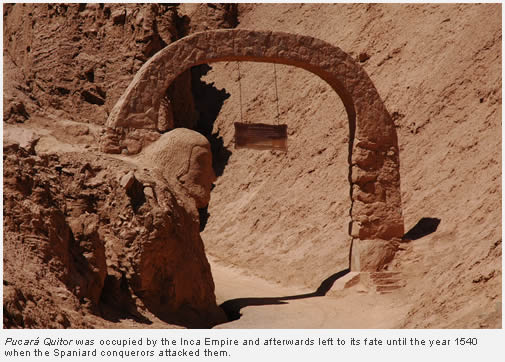 To the other side of the city, we can find another fundamental place, the Tulor village. Excursions are available everyday and leave from the city of San Pedro. In this city, the various ways of life and the ancestral organization of the Atacama native culture had centuries ago may be observed, especially with the help of a guide. This village was settled over 2,000 years ago.

At first glance, this place seems to be a true work of modern art. Adobe is the main material used for the construction of various buildings amazing for visitors. From the architectural point of view, the design of patios, corridors and pathways with various connection methods in the shape of a big labyrinth, is one of the very first attractions for visitors. 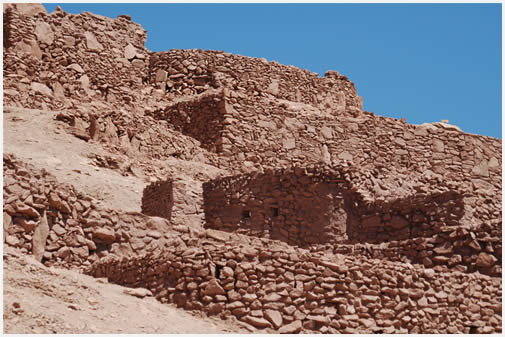 Today, the Atacama culture shows and manages its archaeological sites in such a way that allows the integration of these native peoples, ignored by white men, by transmitting their cultural heritage, which undoubtedly has a lot to teach us.