At the Medialuna Stadium, in the City of Rancagua, the National Rodeo Championship takes place every year. Here is an account of our experience. 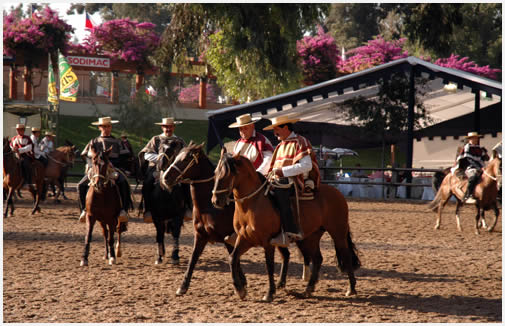 Walking down the streets of Rancagua, we felt the festive atmosphere and were invaded by great expectations and curiosity regarding the essence and the main attraction of this annual meeting held by the Chilean huasos.

As soon as we entered the venue known as La Medialuna, we sensed that the stalls would be crowded. Riders wearing the best huaso garbs and criollo horses with their tack would appear and start practicing on an auxiliary arena. We would say that nobody is nervous. They are hard-working.

The National Rodeo Championship is more than a sport discipline: it is culture and its origins lie in the hard rural tasks. For years on end, countryside men have developed these skills while herding cows from the mountain range down to the valleys.

The National Championship began to be celebrated in 1948. This event is ruled by strict regulations. At first, it attracted countryside people but as time went by, it became a magnet for quite varied an audience. 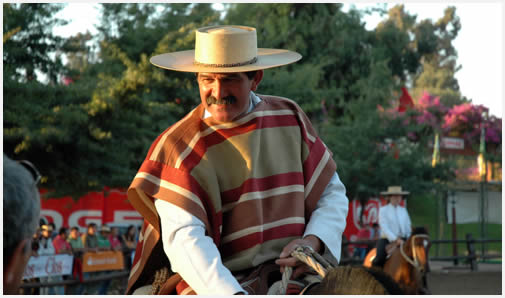 It demands remarkable skills, physical fitness and good coordination among the individuals that make up a paired team or collera which, in turn, train their own horses. Riders over 14 years old take part in this event. There is no age limit. Around 120 colleras must qualify during the first two days in order to obtain the pass to the events on Sunday.

Already on the arena, the assistants put the final touches. Two areas stand out clearly: the apiñadero and the medialuna, both of them perfectly raked. All the details regarding the entrance and exit gates used both by riders and animals are arranged.


The Paired Teams Show Their Skill

In the meantime, the first people to arrive make themselves comfortable at the stalls. The conversations held by the huasos are extremely interesting: data about the participants, the backstage of previous encounters, hunches about possible winners. 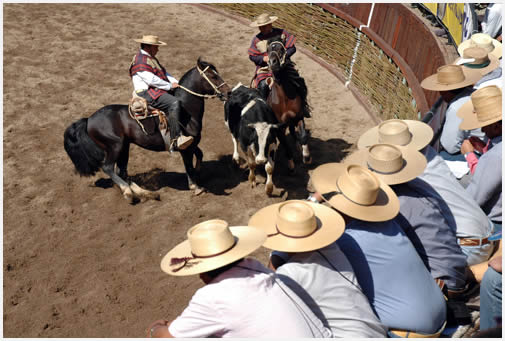 At the apiñadero, the riders wait for the cow and ride two laps to move into the arena, where they will have to stop the animal in three occasions, in points popularly called quinchas. One of the horses stands perpendicularly to the cow and the other horse closes its path from behind. Reins are shortened and spurs are dug in.

Points range from one to four and they are awarded according to the part of the body of the cow where the animal was stopped. This is added to or deducted from other points at stake in the scarce three-minute duration of this display of skills and the score is closely related to the riders performance. Thirteen points is the maximum the collera may receive in each show.

The foremen are chosen among the riders who have been awarded some distinction in previous championships and they are in charge of keeping everything in order inside the Medialuna. Now the festive atmosphere is inside us and we begin to understand why there is so much fondness for this activity. 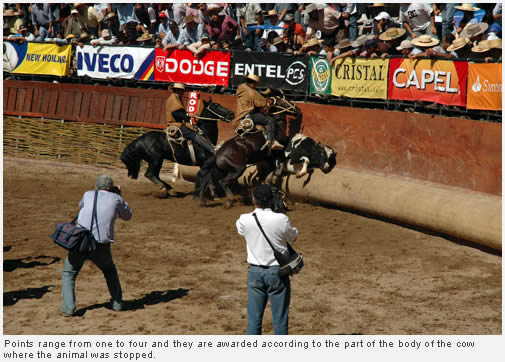 It is said that horses used to be more skittish and that more delicacy was managed in the taming techniques when it came to cornering the cows. Strong, easy to handle, noble, tame are the features of the horses taking part in the event, whereas the cows and bulls also undergo a certain preparation: appropriate food portions and an approximate weight of three hundred and eighty kilos on the day of the rodeo.

Another championship is held at the same time as the rodeo. Its protagonists are the criollo horse breeders. The winners brandish their awards in the pens, especially prepared for visitors to watch. The restaurant and the quinchos authorized to offer a wide range of gastronomic options complete the services, as well as the stalls selling rural handicrafts.

During the second and third days, the number of visitors increases, just like the festive spirit. A second discipline having national scope takes place in parallel with the cow fighting event: reins are held by both men and women riders. On Saturday night, the popular dance is enjoyed with the music played by local bands. 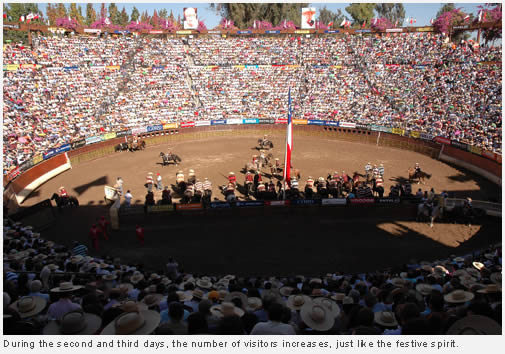 Sunday arrives and there is no room in the stalls of the Medialuna. Tickets were sold out days ago and it is the time for the finals. It is referred to as la Champion by the locals. The best colleras are defining the championship and everything around is full of enthusiasm. All heads are covered by chupallas so that neither the sunshine nor the heat can bother anyone. The time for definitions is near.

Final quincha by quincha. It is impossible to listen to the presenter, the people on the stalls shout unanimously and euphorically. The various categories name their winners. Riders, fans and breeders who bet on fostering rodeo all through the country embrace one another. Awards are granted in front of all the media.


See You Next Year 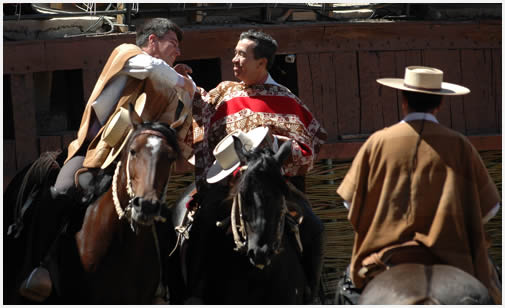 The stalls are abandoned very gradually, as if no one wished this day to end. The national championship will be the talk of town for a long time. For us, it is time to watch how everybody leaves slowly towards the street with the pleasure of having enjoyed such a beautiful encounter.

Here is the essence of the contest: the personal devotion each of the protagonists expresses for this Chilean national sport during the whole year, evidenced at Rancagua when la Champion is the reunion of friends and celebration for all the family at the time the national champions are crowned. 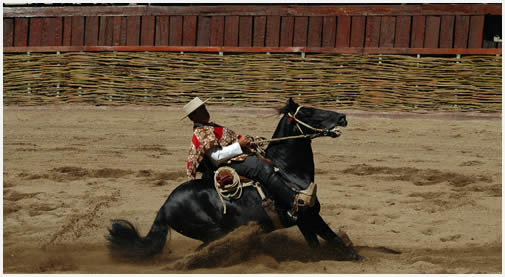 The event is generally held late in March. It is necessary to request confirmation on the date.