We discovered the fantastic surroundings of Aysén and Coyhaique in a horseback ride around the leafy banks of the Simpson River. 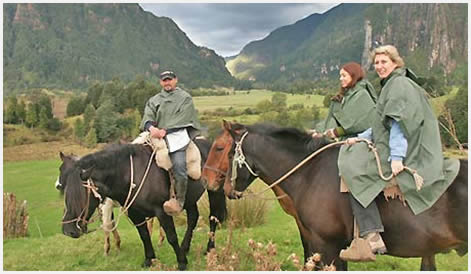 Between Coyaique and Puerto Aysén, Route 240 crosses fields and ravines of a singular beauty, with waterfalls and rocky walls that cause amazement round every bend.
Isabel from Patagonia Green, my hostess at Puerto Aysén, had invited me to go on a horseback ride across this wild geography.
Rodrigo was expecting us at Alcázar estate. He was in charge of Team Patagonia, an undertaking that has been organizing horseback rides, mountaineering excursions and sport fishing outings in the area since 2000.
The detour located 30km from Puerto Aysén indicated the entrance to the field in the surroundings of the Río Simpson National Reserve. Before crossing the narrow bridge, I had already spotted the mount known as Queque Inglés, a formation rising on the border of the road above the lush vegetation and part of the abrupt topography made up by valleys and summits higher than 1,600m. 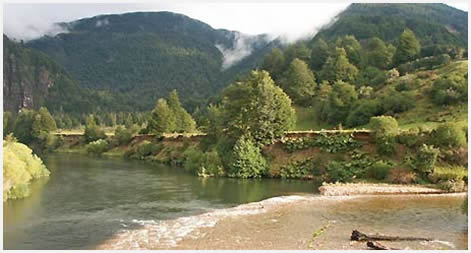 The plentiful Simpson River, which crosses the reserve and borders the Aysén-Coyhaique road, is the perfect scenery for fly-fishing. One of its tributaries is the Cascada de la Virgen River, which ends into a beautiful waterfall which justifies its name.
Once the riding harnesses had been prepared and carrying cloaks in our saddlebags because the weather was threatening with rain, we set out to tour the valley. As a part of the troop, a piebald colt would be amused by galloping ahead of us. Guided by Rodrigo and Luisa, we crossed some gates and a small pampa (plain) following the cattle track. 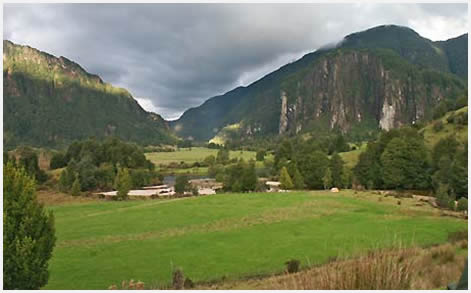 As we advanced, we passed through small woods teeming with coiques, tepas, mañíos, ciruelillos, cinnamon trees and especially chilcos, a predominant local bush. After ascending a hill where we left our horses, we continued our way on foot towards the vantage point. From there, we spotted the joint of the Simpson River and the Caracoles River, a special point for trout and salmon fishing.

When we started our way back, we had not realized what time it was and a cold wind began to announce that the sun was setting. 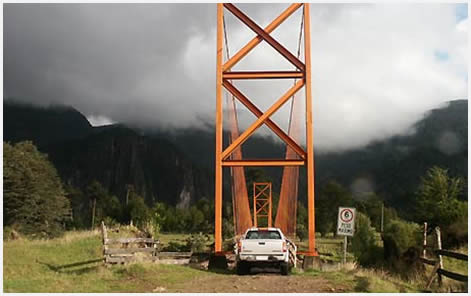 We stayed there for a while beholding the scenery, which after the dark clouds had passed was visited by a rainbow that crowned the valley.

1½-hour and 3-hour horseback rides. Excursions to the mount: 5 hours.

this place is accessed through Route 240, which joins Coyhaique and Puerto Aisen. There is a signpost at the 30th km.