We visited Norte, Capel, Mistral, Tres Erres and Artesanos de Cochiguaz pisco producers to reveal the mysteries of how the most famous pisco in the world is made. 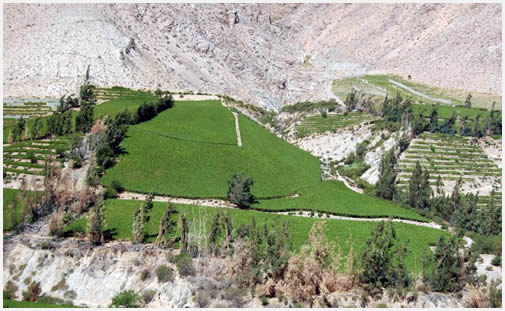 It is well known that pisco is considered the national drink in Chile. But, where is this delicious liqueur with an intense aroma of fruit made? The answer to this question may be found across the Elqui Valley, where the most important pisco producers in the country are located. These venues offer amusing tours around their facilities so that tourists visiting these latitudes may learn about the secrets and virtues of this ancient alcoholic beverage.
Our trip starts at the 46th kilometer marker on Route 41, more precisely at fundo San Carlos, where Ruta Norte pisco plant and its famous Piscology College" are located. Visitors may find out everything related to the process of making pisco and end the tour as "graduates" and specialists in the subject. 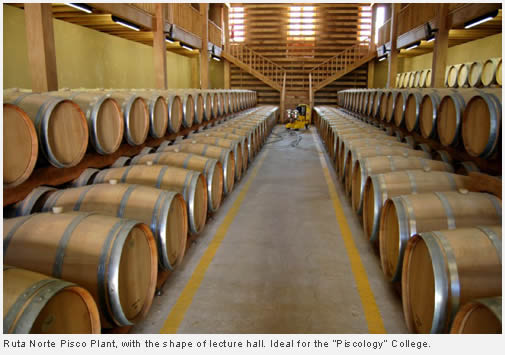 Thus, we understand that there are five important moments in the making of this exquisite liqueur: reception of the grape, winemaking, distillation, storage and preparation, and then bottling. We will learn the characteristics of each process as we continue on this journey across the rest of the pisco producers. The important thing to know is that the process of receiving the grape takes place in April, as the grape harvest goes from February to late in May. In order to determine the degree of ripeness of the pisco grapes -especially Muscat - the best relation between sugar content, aroma and weight is searched. Before leaving, we were invited to taste a glass of pisco containing 35º alcohol. 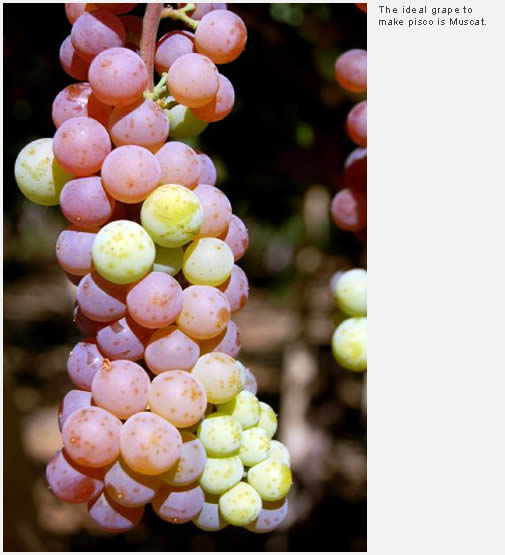 We moved on. We had an important tour ahead of us. We left the City of Vicuña behind and the great vine plantations to the sides of the road did not pass unnoticed.
Our next stop was Pisco Capel Brewery. This is the most important venue in the region. Before getting in, the particular aroma of pisco may already be smelled. A beautiful colonial estate indicates the beginning of the tour and an experienced guide is in charge of showing us the modern facilities and of explaining the process of making this liqueur.
Let us remember that the second stage in the process of making pisco is vinification. This consists in transforming the sugars contained in the grape juice into alcohol. That is to say, making wine. Through various maceration and fermentation times at controlled temperatures, the Muscat grape wine is made, which will later be turned into pisco. How? We will deal with this below. 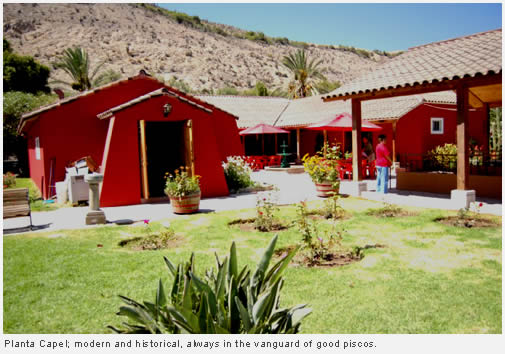 Touring around the facilities of Capel pisco producing plant is an extraordinary experience. The great infrastructure and professional qualifications of its workers are breathtaking. Besides, so much has been said about pisco that we are already feeling thirsty and, as expected, we were taken to a bar inside the big house in order to share a pisco sour with everyone there. All the merchandising items from Capel are sold at the nearby rooms.
After visiting this huge venue, we continued along into the Valley of the Elqui up to the District of Monte Grande the land who saw famous writer Gabriela Mistral grow up. At this point, in the surroundings of its square, there lies the Artesanos de Cochiguaz (Cochiguaz Craftsmen) grounding plant.
We toured around the facilities and, as indicated by its name, the production of pisco is made as a craft. A large signpost shows Ruperto, the party donkey icon of Cochiguaz pisco, showing us the way onto the salesroom, our next destination. 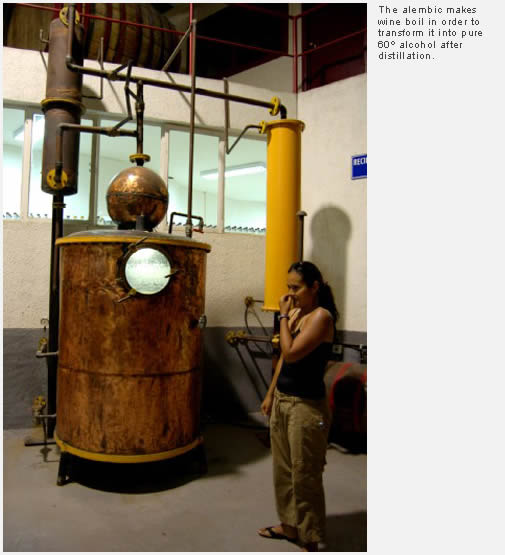 We remembered that the third step in the making of pisco is distillation. The purpose of this process is to transform wine into pisco alcohol. Wine is put into huge copper alembics and raised to high temperatures to obtain alcohol steam, which later becomes condensed in order to get pure 60º alcohol without any kind of impurities. Undoubtedly, this is a very high graduation to be consumed by the human body. That is why the process does not end here.
We left Artesanos de Cochiguaz behind and after some kilometers, we reached the village of Pisco Elqui. Nothing better than such a name for a pisco village. There we found the Tres Erres (Three Rs) estate, named after Rigoberto Rodríguez Rodríguez, one of the first producers in the area and whose trademark was purchased by the second most important pisco brewery, Control, whose plant lies at La Serena.
Tres Erres estate lies amidst hills teeming with grapes. We were welcomed inside, just like in the other breweries, and learned about its history and its production stages. A museum displays some ancient machines to make alcohol and pictures of the area. And of course, the essential moment for tasting pisco arrived. 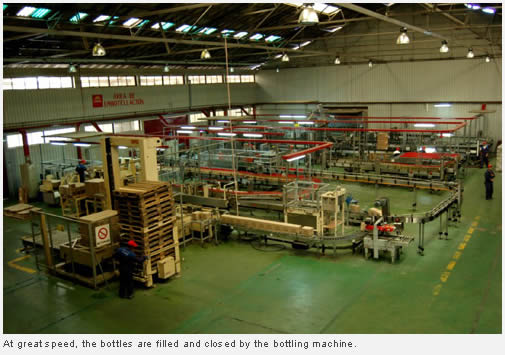 Getting on with the explanation about the making of this precious alcoholic nectar, the fourth step is preparation and storage. The purpose of this process is to obtain good quality pisco, both from the chemical and organoleptic pint of view. Though some may consider this a great deception, after distillation, alcohol is softened with demineralized water. All pisco has a little water that decreases its degree of alcohol to regular measures suitable for consumption. After being prepared, it is stored for a while in oak casks, where it acquires its final features, according to the period during which it remains in contact with the wood.
Finally, the last stage is bottling. This process is semi automatic. Bottles are washed, filled, closed and then placed in boxes in order to be sent to the winery of end products for their commercialization. 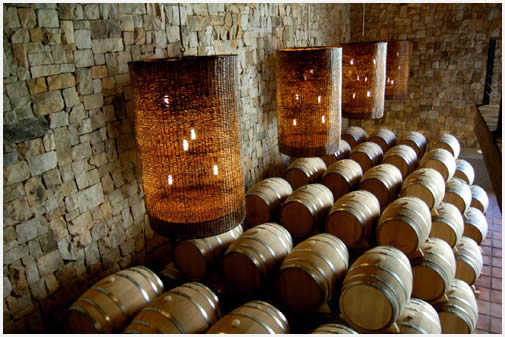 Thus, this is the end of our tour around the Route of Pisco. At this point in the map, prices remain low and the temptation to keep on tasting the most delicious Chilean pisco is very hard to resist. It is our advice to make a stop here, as we still have many steps to retrace. When visiting La Serena or Vicuña, we recommend that you go along the Route of Pisco. All your senses will be grateful.

Either leaving from La Serena or from Vicuña, just take Route 41, which gets deep into the Elqui Valley.

pisco producing venues are generally open from Monday thru Sunday from 10am to 6pm.

It is important to taste pisco only in small amounts if you plan to go on the entire tour. You may buy first quality bottles at each venue and then open them at home. Do not drink and drive.

« Back to Outings in La Serena