When the Sun Is Hot

Clean beaches, white sands, rock formations and a blue sea are the perfect combination for the summer in Iquique. Here we present the best options to spend a day by the sea. 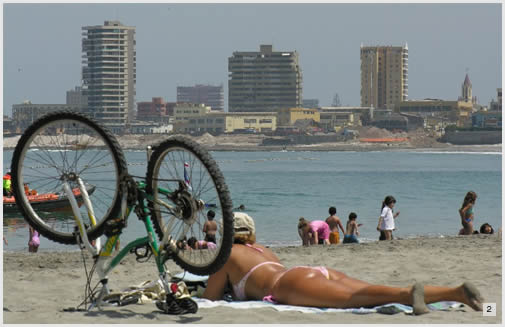 The beaches of Iquique are clean and clear, their sands are so white that they invite the Pacific Ocean to bathe them placidly. Geographically, in this area of the map, there are not big rock formations, so the sea turns into one of the most appropriate sites to have a bath.

Preferred by the youngest, surrounded by huge palm trees and proposed for the Blue Flag International Award (one of the cleanest beaches in the world), Cavancha Beach has all the necessary conditions to be the most popular beach in the city.

During the '70s and '80s, Iquique was not outside the cultural movements and trends mainly imposed from the US. By this time, many hotels were opened, which in a way tried to transmit to this exotic sea what was happening in California or Miami, or in the beautiful Mexican city of Acapulco. Today, they outstand along the promenade together with other modern hotel resorts which have been opened recently, and, day after day, summer after summer, have ratified their existence.

On this beach, dawn unveils hundreds of tourists and locals working out in the mornings. Its white and hard sands turn it into an ideal place for jogging. The '90s have left their trace in huge hotels which, with their modern and daring architecture, could take the sea up to the very rooms and common areas.

On these beaches, as soon as the sun is hot, the surf boards seize the waters and, at the cry of Lets go surfin now, everybody´s learning how (the song which made surfing famous in the world), dozens of young boys and girls from all around Chile begin to go deep into the sea. 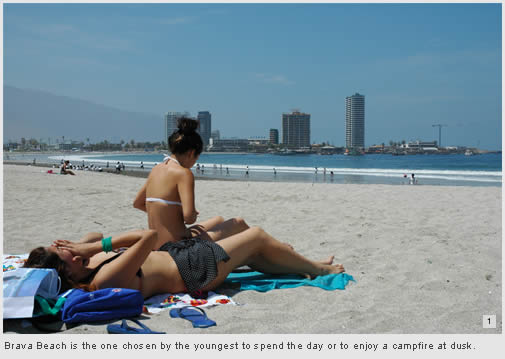 They can be seen for hours waiting for the perfect swell or relaxing with the soft movement of the sea and its tides, calm but always on time.

At dusk, dozens of groups of young people arrive by car or settle on the sand with their guitars, campfires and some appetizers to enjoy the last sun beams offered by the ocean.

Brava or Cavancha, Iquique offers in its beaches the crowd or the calmness to delight visitors and invite them to get into a sea which is never cold and always has something to be discovered. 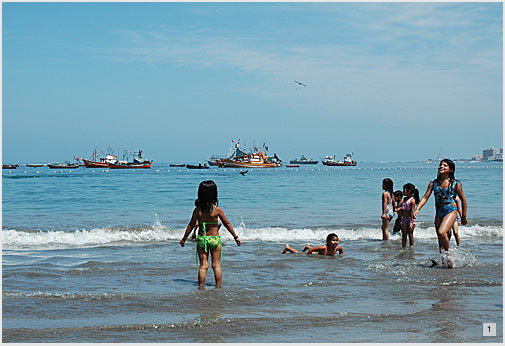 It is advisable to wear sun protection and not to be exposed to the sun at noon.

Both beaches are located in the very heart of the City of Iquique, separated by a small rock formation but linked by a promenade ideal to walk northwards and southwards.