Salt of the Earth

The salt was related with almost every aspect in the origin of Iquique and the rest of the cities in Northern Chile. Today, some excursions enable visitors to see wath life used to be like in those days. 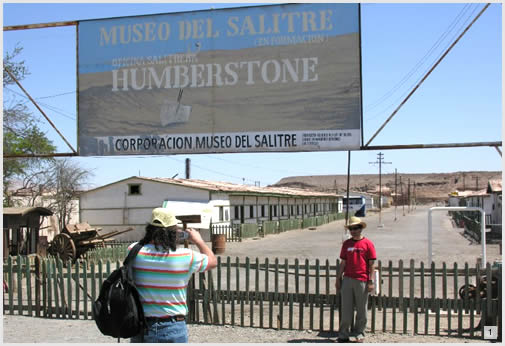 Leaving Iquique behind and following the road to the East, the aridity of the desert begins to be noticed after a few kilometers, as it triumphs over the humidity of the Pacific Ocean. Before reaching Ruta Panamericana (the Pan-American Highway), where the district of Pozo Almonte is located, nature becomes harsh and all vegetation practically disappears. Only some salt spots radiating heat may be seen alongside machines, workshops, housing units and buildings covered with rust, vestiges of the times of glory now gone forever. 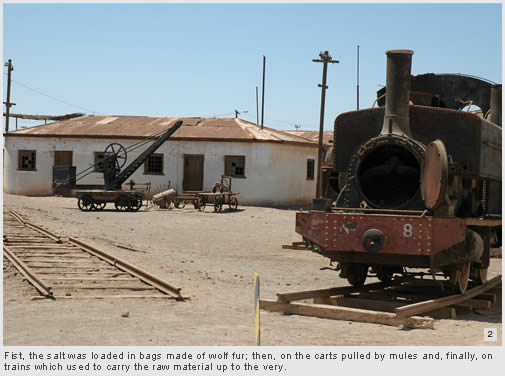 This first abandoned and rusty village appears after leaving Iquique. It is called Santa Laura. It used to be a saltpeter facility built in 1872 and remodeled in the early XXth century to adopt the Shanks extraction system.

This method, which would later become practically universal, consisted in extracting the salt by using water steam. Such technique, discovered by the Chilean businessman and chemist don Pedro Gamboni, would later be enhanced by another pioneer: Englishman Santiago Humberstone.

Towards 1930, Santa Laura had a permanent population of almost one thousand inhabitants. Today, it is possible to appreciate the buildings that still stand and let visitors imagine what those days used to be like. Santa Laura closed its doors in the early 1960s, when the salt had ceased to be a millionaire business. 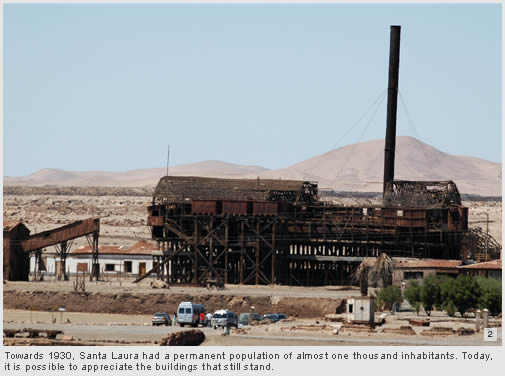 This 25-year-old man arrived from England in 1875 and revolutionized the extraction of salt, not only in his own saltpeter works (one of them has been named after him) but also in those located in the rest of the country. Trained as a chemist and a successful businessman, this skilful entrepreneur succeeded where many others failed: he universalized the extraction method and unified the costs of the undertaking, especially manpower.

The large scale exploitation of saltpeter began in the early 1800s with the purpose of making gunpowder and fertilizers. The first saltpeter shipments were exported to Europe and the United States, making the region become worldwide known.

The Humberstone works are today one of the most important tourist attractions in Iquique. They display a vast industrial area with typical buildings, a main square, hotels, markets, schools, streets and other constructions. 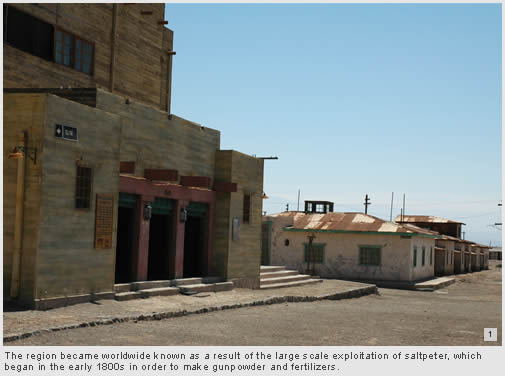 The saltpeter from the various camps located in the surroundings arrived in these facilities. The salt workers loaded the salt in bags made of wolf fur. Later on, the carts pulled by mules appeared. Finally, the trains would carry the raw material up to the saltpeter works.

The 1950s managed to change the course of the economy of saltpeter. The discovery of the chemical synthesis of nitrate reduced the exploitation. Therefore, a raw material consumed by the world came to be replaced by new and more efficient products. Today, tourism has rescued this rich part of history and shows it intact for whoever wishes to learn about it. 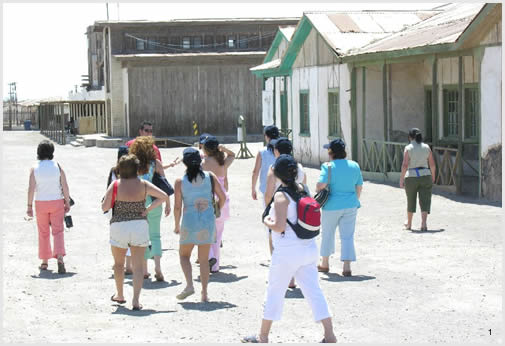 Even if there are hundreds of towns and saltpeter facilities in the desert, most tours go up to the old Santa Laura and Humberstone works, lying only 50 kilometers away from the City of Iquique.