According to many experts, this is the best place in the world to paraglide. A tongue of sand that helps them leave the ground, the beauty of the city and the landing on the beach make this experience unique. 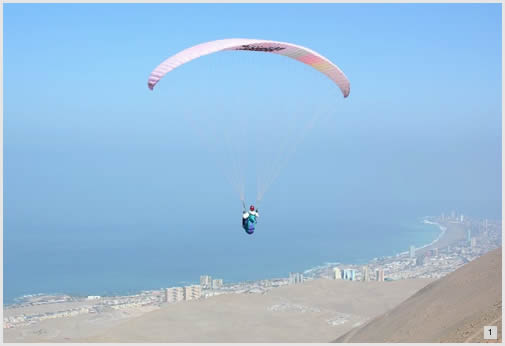 I had heard the phrase "Fly Quique" a long time ago and I always thought Quique was one of the best-known paragliders or hanggliders in Chile. As soon as we reached the nice City of Iquique, I did not hesitate to approach a group of a hundred paragliders who take off almost every weekend -when the weather conditions are good- in order to cross the skies and get a matchless view.

It was 10 oclock in the morning on Saturday and it took only a few minutes for the wings to come out of the backpacks in order to get some air and be inflated after the pilots got dressed. 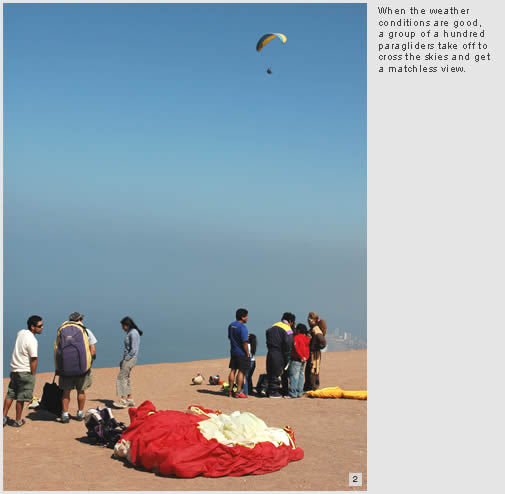 Then the doubt was resolved: Fly Quique was the phrase the paragliders said in unison when the first of them took off. Quique was not the name of the pilot but a phrase that mentioned fast turns into a kind of salute to the city.

It is like asking permission, a way of thanking how much of a bird we humans can be told me one of the paragliders as I asked about the origins of the phrase.

No sooner had the wing been inflated than the instructor asked me not to stop running. We were already attached to one another and in a few seconds we would be flying. I did as he said and almost naturally our feet left the ground. The vastness of the sky of Iquique unfolded before our eyes. 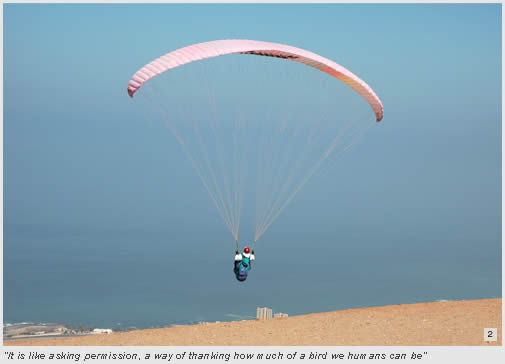 Behind us, a group of paragliders would clap and yell as we -the instructor and I- continued flying over the perfect straight line drawn by the sand ridge of Mount Dragón. This is a natural dune declared Nature's Heritage in 2004. With a height of 175 meters and a length of almost 4 kilometers, it is constituted as the largest dune or sand tongue in the city.

As we left the tongue behind, a small but powerful thermal began to move our wing in a clear sign that the hot air through which we were flying would make us go up. 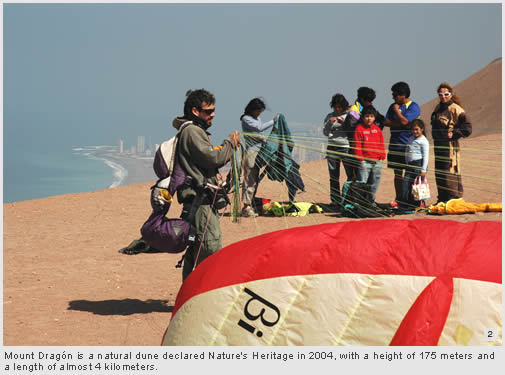 We gained height slowly. The clock would mark almost 1,200 meters and below us the city displayed each of its majestic nooks: its beaches, the casino, the old port, Baquedano Street, the main square and, especially, the huge blue Pacific Ocean.

It was then that a vulture -also known as urubú- approached us quickly to have a look at us. The bird began to show us a thermal current so that we could fly with it.

Things few times seen on earth happen in the air and the family of free flight is undoubtedly one of the most beautiful and romantic families that man may ever meet. 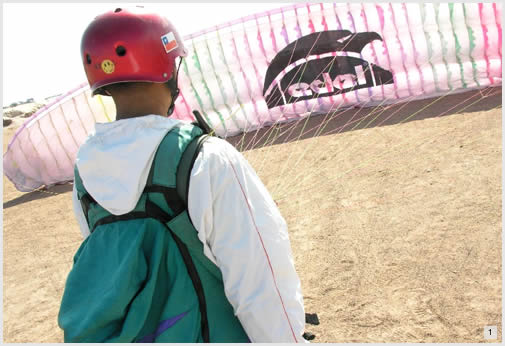 To fly on our own with a paraglide, it is necessary to take a course that implies approximately twenty flights. In addition to theory and practice, the paraglide from the school chosen is used. In turn, those who only wish to try this experience once must take a first tandem flight in the company of an instructor.