We made ourselves comfortable inside one of the vessels lounge areas and enjoyed the tour around the fjords, channels and islands until we came to the glaciers and experienced the constant calving of their icy walls from a close distance. 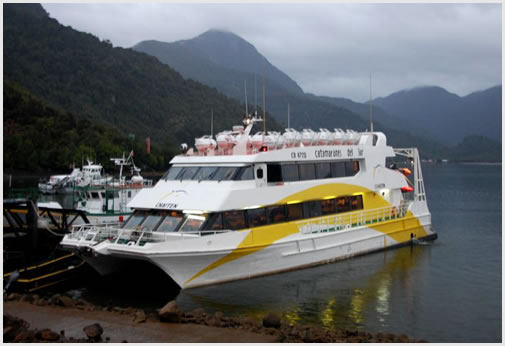 Laguna San Rafael National Park is one of the most spectacular sites in southern Chile and it is reached by large vessels that visit the Northern Ice Field and Lake San Rafael.

We gathered very early in the morning at Port Chacabuco, where we boarded a catamaran. We found a nice spot in front of the large windows so as not to miss anything. We set sail as the guide told us about the course of the voyage. The ship headed for Aysén Fjord, which features whimsical forms and stunning snow-capped mountains. We were inside the territory of Chono, Alacalufe and Yagan natives. 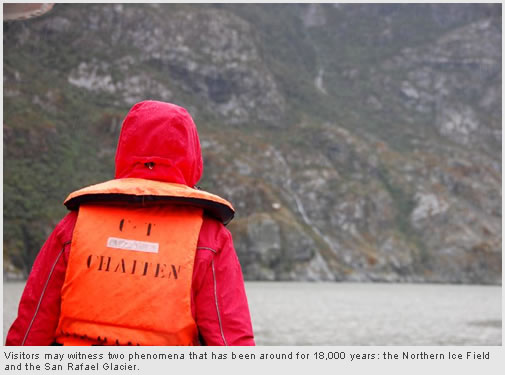 We sailed along Costa Channel and Elefantes Estuary surrounded by islands with green vegetation. We were looking forward to getting to the ice phenomenon that has been changing its structure for over 18,000 years. As we entered the Témpanos River, we knew we were getting close. As it is quite shallow, we could appreciate the ice floes which had broken off the snowdrift and gone adrift.

As we entered Lake San Rafael, we were in front of the glacier wall bearing the same name and spanning several kilometers. We stayed there for a while, beholding that wonder while listening to interesting data about the last glaciation period, which shaped Patagonia, on the loudspeakers. The national park was declared world biosphere reserve by UNESCO in 1979. 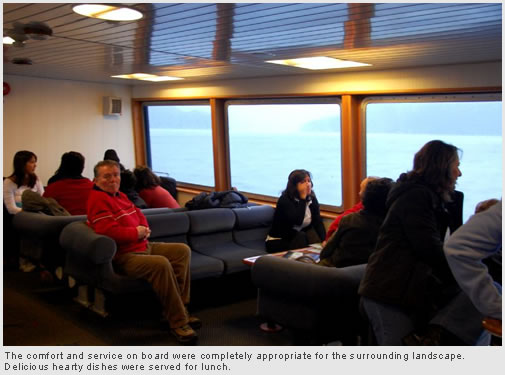 We felt thrilled to see the luminosity produced by the glacier. It seemed to detached it from the lake waters. Then the time came to land and walk towards the 40-meter-high white and blue ice mass that succeeded in captivating us. We took all the pictures we could as we were certain this was a one-in-a-lifetime experience.

We would have liked to stay there longer but the cold temperature made us go back to the catamaran. Once on board, we remained on the top deck to keep the glacier in sight. It looked even closer than before and its incredible formations were magnificent. 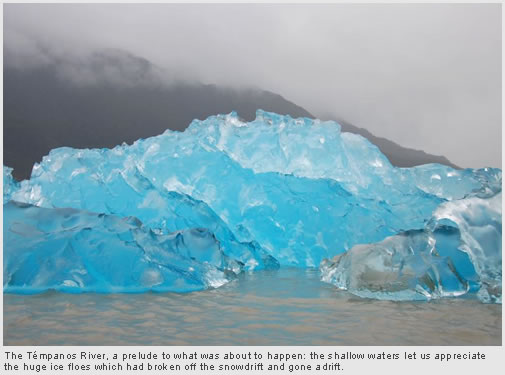 The ample and comfortable lounge inside the catamaran compensated for the temperature outside. We relished the comfort armchairs and good large windows during the rest of the voyage. We tasted delicious and hearty dishes served by the buffet service.

We made a toast with a glass of whisky and ice from the glacier the guides had picked up to bid farewell to these southern lands. It was a special moment.

Returning to Puerto Chacabuco was amusing and our conversations with the other passengers were quite pleasant. We were all feeling satisfied to have shared such an adventure and agreed we had enjoyed the glacier to the utmost. Good music and even dancing were present before we landed. 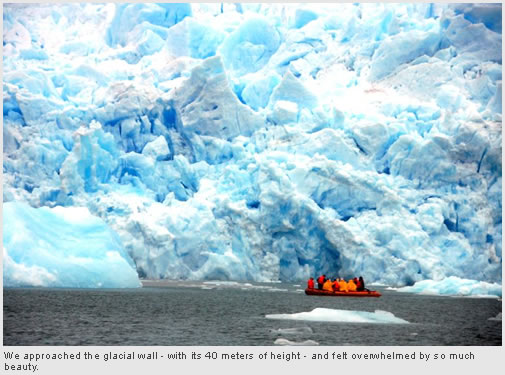 Arranged by the operators.

Agencies offer various voyage programs and some of them even organize flights over the glacier.