We visited the Third Millenium Cross Monument, a real icon of Christian faith in Chile. From the height of its arms we beheld a wonderful view of the city. 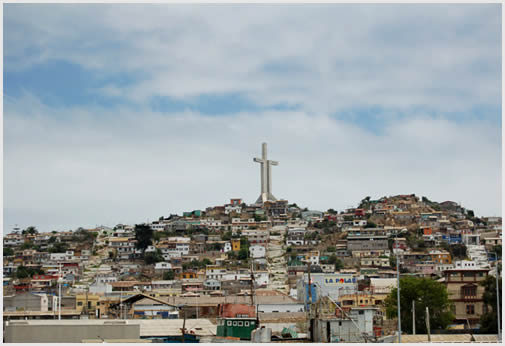 From a distance, it denotes its omnipresence; it can be seen from everywhere, even from the coasts of neighboring towns. This is a monument erected in Mount El Vigía at Coquimbo, which represents the famous Third Millenium Cross.
The impressive construction moved the whole town, mostly Catholics. It is the highest and most marvelous building work erected in South America in honor to the 2,000 years of the birth of Jesus. It has been built at 157 m.a.s.l. 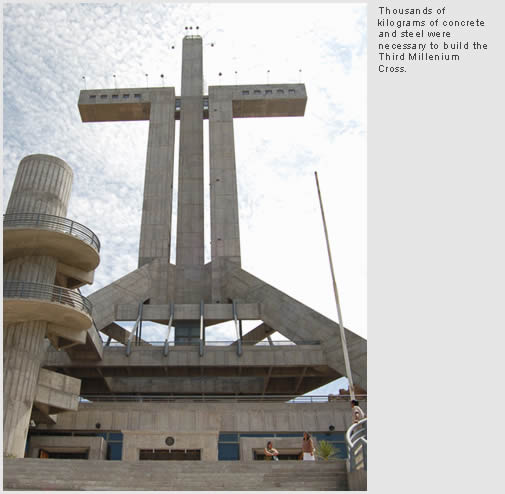 Its base is made of three leaning pillars which form a large tripod. Upon it, the immense Cross made of three columns representing the Holy Trinity is erected. Its maximum height is 83 meters and it is 40 meters wide. The 2,000-steps staircase is the access to the base and the worship area, which consists of a chapel, a museum and a photographic exhibition where different stages of the construction of the Cross can be seen, until its inauguration, in May 5th, 2000. The gifts from Juan Pablo II for such a monument that immortalizes Christian faith are also shown.
Whether taking the elevator or the stairs, the first vantage point located 20 meters high and the ecumenical prayer square decorated with vitraux can be reached from there. 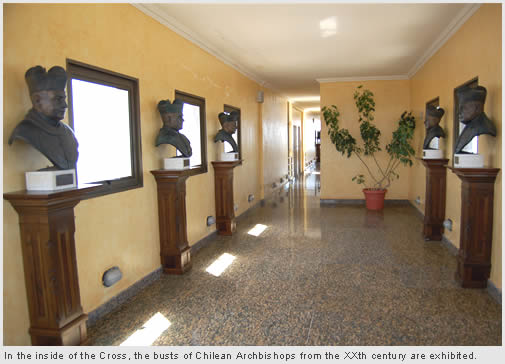 The last stretch up to the vantage points located inside the horizontal arms of the Cross may be visited by taking the elevators or the stairs inside the pillars. From the large windows of the Cross an amazing 360º panoramic view of Coquimbo, its bay and the Pacific Ocean is appreciated.
The initiative was carried out before the Vatican by the Coquimbo Government, and having obtained the total approval from the Pope, the works of the monument that reminds people of the 2000 Jubilee began.
Walking along its interior, we noticed a solemn atmosphere and only soft murmurs were heard.
Two rooms appear in the arms of the Cross: one of them keeps the busts of the Chilean Archbishops during last century, while the other one shows the busts of Popes John Paul II and Benedict XVI.
Standing still in front of the windows facing the Pacific Ocean, we remembered the words pronounced by Christ: Faith can move mountains. It can also change them. When visiting Coquimbo, your senses will be captivated by the Third Millenium Cross. 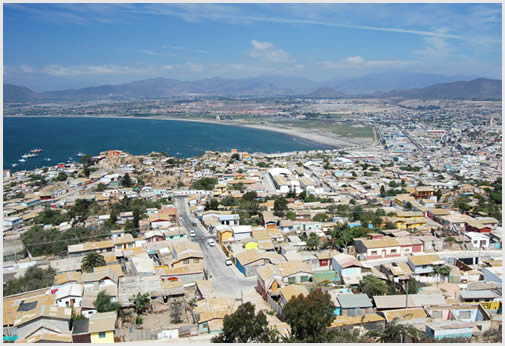 There are two ways to get there. Drive up Portales street up to Anita Lizana Street and turn right, continue up to the end of the street and turn left onto Alonso de Ercilla street, up to a Reten de Carabineros; then, turn right onto Double Almeyda street up to Juan Pablo II, the monument access street. The other option is driving up along Portales street up to Luis Ayala street (Jerusalem square), turn right, continue two more blocks and turn right onto Bellamar street up to Padre Alberto Hurtado school, where you need to turn left one more block onto Double Almeyda street, and get Juan Pablo II street, the monument access street.

bring a camera, the panoramic view from up there is a real postcard.

« Back to Outings in Coquimbo