Chuquicamata is the largest copper mine in the world to which Chile owes its prosperous economy and the acknowledgement this natural metal has earned the country all round the world. 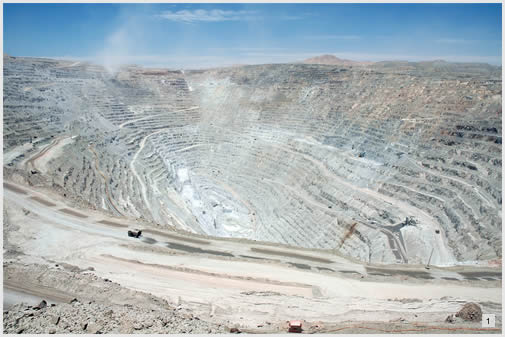 A 16-kilometer-long straight line of lanes that go in two opposite directions separate the mine from the City of Calama, a place mostly dwelled by the miners that work in is venue everyday. Chuquicamata is an amazing excursion even for those who are not interested either in the mining industry or in the high economical rates. The truth is that the over 620 thousand tons of fine copper of maximum purity invite the worst non-believers to see what this is about. And it is worth getting on the excursion bus to get to the core of this monster. 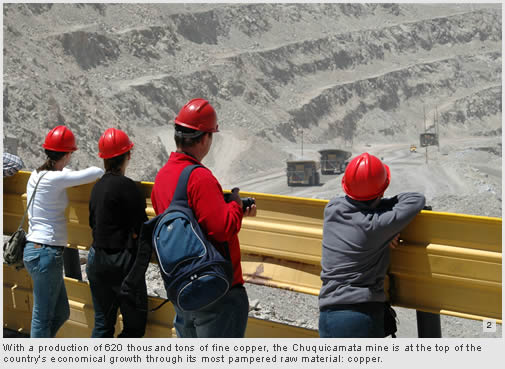 Eating with the Miners

Almost by chance, lunchtime found us at the Club Social Empleados, the dining-room the miners have chosen for decades to have lunch which serves a unique menu everyday. Soup or broth as a starter, a main course, a soft drink or water and a dessert. Even though variety does not exist, no one rejects the dish of the day. Most customers find there a small place for recreation from the effort and the demands of the mine. 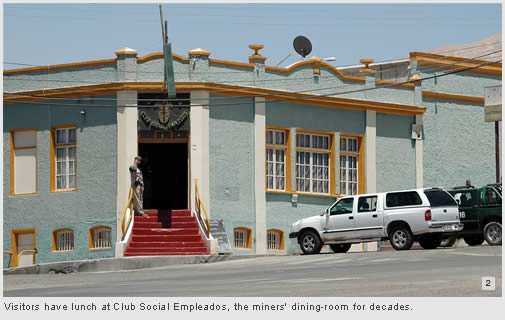 Tourists, on the other hand, try to go unnoticed (something impossible) and understand some codes and ways typical of those who work with copper everyday.

No sooner had we finished having lunch than a bus full of tourists of all nationalities parked opposite the Chuquicamata Tourist Office. Once there, we were informed about what we could and could not do at the mine and shown an educational video about everything related to the copper industry. 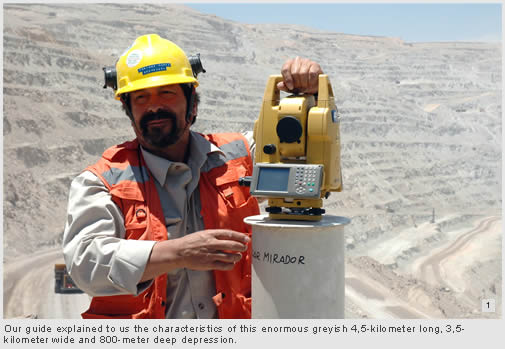 We learned about how the metal is extracted, the technical processes used for its purification, the works done with it and, finally, the world destinations where this huge production is exported, such as the Asian, European and American markets. The theoretical knowledge had managed to calm down the eagerness of the group, at least for a few minutes.

The members of the tour who were browsing an issue of Oasis magazine, a fortnight publication devoted to the mining industry, only had to hear the engine being started to make a queue in front of the bus that would take them directly to the mine, where they would experience the second part of the lecture: practice.


A Real Sleeping Giant
As soon as the bus stopped, it was impossible not to be amazed at what could be seen at first sight. 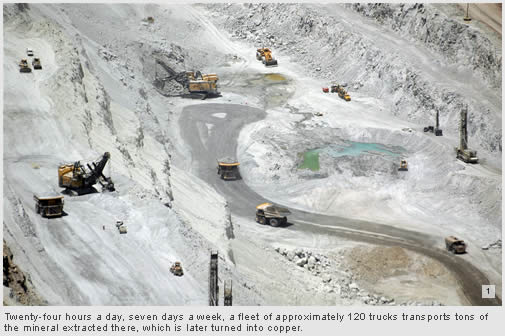 A huge grey depression, not to say a great crater, was the aim of our incredulous looks. With 4.5 kilometers of length and 3.5 kilometers of width and a depth of over 800 meters, the mine does not go unnoticed.

Two operators dressed in red and wearing the corresponding helmets gave us our own helmets and indicated the few places around which we could step.

In a matter of seconds, the attraction moved from the depths of the mine to the great number of road equipment and machinery that, along with the men who handle them, do the hard job. 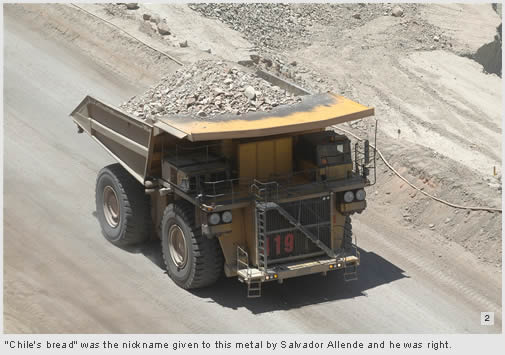 Twenty-four hours a day, seven days a week, a fleet of approximately 120 trucks transports tons of the mineral extracted there, which is later turned into copper,. Their wheels caught our attention because they were larger than any of us. Photographs soon were taken everywhere.

After almost one hour of listening to the guide, we gradually got to know the details of mining. In addition to representing job positions for thousands of families, this activity outlines the growth of the country through its most pampered raw material: copper. Chiles bread was the nickname given to it by Salvador Allende and he was right. 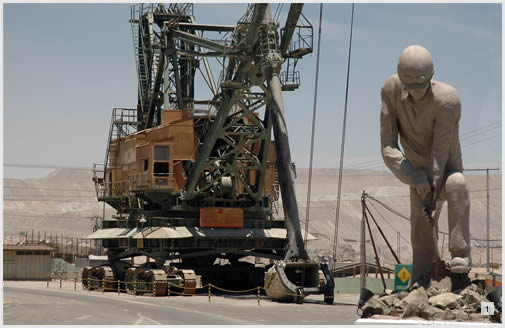 From Chuquicamata, it is possible to take part in one of the tours that leave towards the great mine everyday. Prior reservations should be made at the offices of Codelco opposite the small town square.

« Back to Outings in Calama