The Uyuni Salt Deposit is unique on this planet. Anything goes there and each day is different from the next one. A magical place indeed where God just left track of His existence. 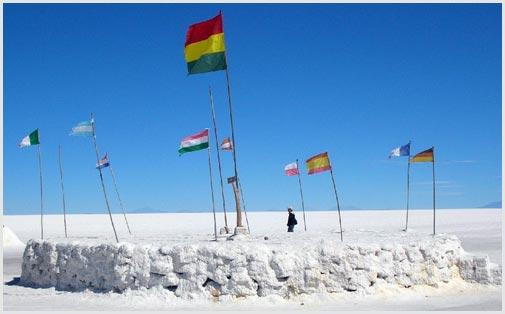 Located in Southwestern Bolivia, the Uyuni Salt Deposit is considered the largest and highest in the world. With a surface of 10,582 square kilometers, it lies at a height of 3,653 meters above sea level.

This semi desert area, of volcanic lands, encloses resources of high tourist importance: sceneries of extraordinary and exotic beauty which are also very much considered due to their economic possibilities. The salt deposit has a reserve of 9 million tons of lithium and other minerals.

When entering the salt deposit, all communication with the outer world is lost and days are spent in an extreme degree of isolation where all kinds of sceneries and temperatures co-exist. Wildlife is obviously affected by this. 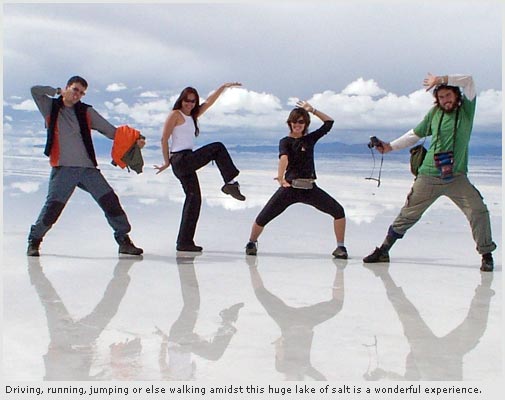 The spectacular geysers, the rocky formations and the volcanic pools with their sulfur fumaroles which take the visitors back to the times when the Earth was formed are some attractions to be enjoyed as days pass and the various settlements and interesting points in the salt deposit are visited.

As visitors get deep into the salt deposit, they come across various hotels built and furnished entirely with elements made of this mineral, from the bricks and walls to the beds, tables and chairs, as well as other daily objects that, being made of salt, look very strange. Nevertheless, they do not melt.

Other interesting points are Isla Pescado (Fish Island), or Cujirí Island, which shelters a picturesque rocky scenery where a surface of granite and organic soil has permitted the development of a kind of giant cactus which reaches over 6 meters of height in such a wild area and with such low temperatures.

Isla de los Pescadores (Fishermen Island), or Inkawasi Island, is an extraordinary place for photographs and beholding the scenery in a unique, wild and solitary environment where everything is possible. 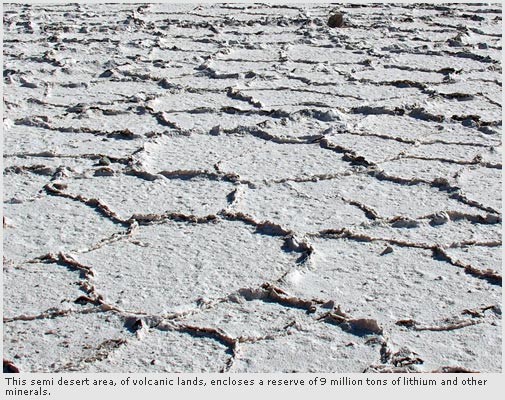 Driving, running, jumping or else walking amidst this huge lake of salt is a wonderful experience. At times, the scenery looks like the moon and the contrasts between the blue sky and the white soil stand out in a unique way.

When it is cloudy, an effect known as white out takes place: the horizon becomes blurred and almost disappears and it is impossible to tell the earth from the sky.

There are spectacular and magical days, as the locals call them, after the rain, when the salt deposit features a thin layer of water. If the white well-defined clouds find their way on the blue sky, the salt deposit becomes a real mirror that reflects very clearly everything that happens in the sky and its surface. Therefore, it is possible to look at oneself, pull faces, pose and play as if we were jumping on a huge endless mirror.

It is then when it is possible to feel the wonderment of the human eye in its most remarkable version and to become aware of how worthy it was to go on such a trip because it will remain in our retinas forever. 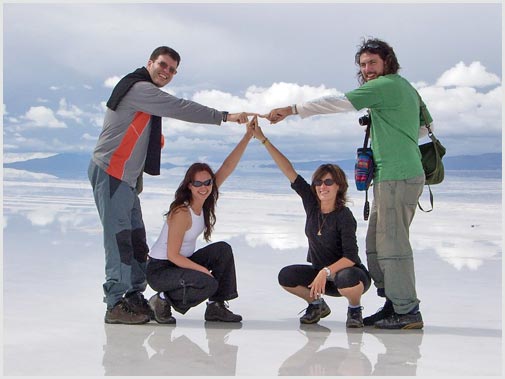 The Uyuni Salt Deposit may be reached by hiring one of the excursions that leave from San Pedro de Atacama, a small and beautiful city. It takes approximately 8 hours to tour around volcanoes, high plateau lagoons, geysers and, of course, dozens of salt deposits.