The development, richness and history of the Antofagasta region are closely associated with the salt industry. Its possible to retrace the footsteps of history in this city and its surroundings. As the saltpeter became of great importance in northern Chile years ago, the territory was organized in separate areas bringing about the present group of salt works where the highest concentration of salt may be found. Therefore, five territorial districts known as cantones were created under the following names: El Toco, Pampa Central or Bolivia, El Boquete, Aguas Blancas and Taltal. The last city was founded in 1850, when Jose Antonio Moreno discovered the salt region. Since then, the population has grown as a result of these mining facilities and the port built by Moreno for the export of minerals overseas. 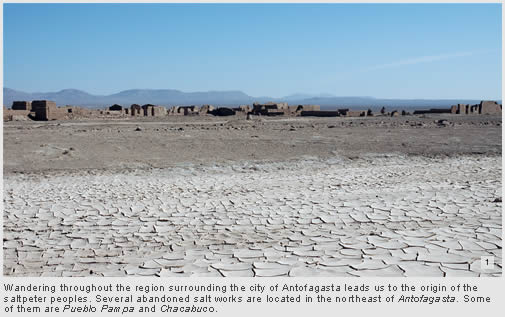 In 1882, the arrival of the saltpeter railway and its rail branch lines which joined all the salt works of the region together with their important facilities, including piers, warehouses and their own coal bin led to a period of economic boom.

Journey to the Center of the Salt Area

Wandering throughout the region surrounding the city of Antofagasta leads us to the origin of the saltpeter peoples. Several abandoned salt works are located in the northeast of Antofagasta. Some of them are Pueblo Pampa Unión and Chacabuco.

The Ferrocarril Unión railway station used to lie in the middle of the salt plain. A town named Pampa Unión was settled around it as from 1911, and it started to grow gradually to such an extent that it became a place with more social and recreational alternatives for the salt workers of different districts than any other. There was life there. Just like in the salt work in Chacabuco, considered an important district because of an urban development which provided a satisfactory life for a population of over 5 thousand inhabitants.

Its glorious times ended in 1940, when salt was not considered a business in the world any more. Today, this salt work is one of the most faithful proofs of the life of workers in the salt plain.

María Elena, the Only Surviving Example

Maria Elena is the sole natural saline field under exploitation. It was created in 1926 based on the same traditional architecture as the rest of the salt plain settlements and the nearby Plaza de Armas. From such site, we can gaze several places expecting the usual visit of tourists: the old building, the tavern (pulpería), the theater, The Anthropological Museum and the former Escuela Consolidada de Experimentación. These buildings help us to clearly appreciate how the community has lived now and in the past, where salt has played the most important part of the daily life of thousands of people.

Its refurbished dynamic center preserves the traditions of a flourishing time and a steady economy known by the Chilean people as the White Gold Time. A historical moment which survives and is breathed in every corner of the region of Antofagasta. We can go to the salt works by car; therefore, elderly people are also able to enjoy the place. If you want to be well-informed and better understand this visit, any book on Chilean history can describe the past times of the salt industry.